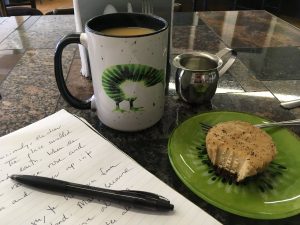 “How do I write?” people sometimes ask me. And it’s clear that this is a big question, one they’ve been carrying around for a long time. A yearning, really.

“You write,” I say, as gently as I can. Then I suggest: start with 10 minutes a day, begin anywhere. Begin – as I often did, years ago – with Nathalie Goldberg’s simple prompt: I remember. Then flip it, halfway through. I don’t remember. It’s very powerful.

I’m not sure how to answer this, how to help people break out of this painful loop. What I believe is that they’ve been carrying this yearning around for so long that the thought of putting it down and turning towards practical action is scary.

Writing has become a fantasy, an unattainable dream. As long as they don’t try, they will be safe. And surely – surely! – it can’t be as simple as that! You write.

Last weekend, I learned how to spin wool into yarn on a simple wooden spindle. I paid for a lesson. The teacher said: “people have been doing this for thousands of years.”

She showed me. I started. We sat and spun.

“It’s not rocket science,” she said, then amended her answer because, well, it transformed human cultures.

When I left, she said, “Keep practicing.” I know the drill: do a bit everyday to keep learning, to get better, to wire the action into my brain. To create enough yarn to ply into a stable skein.

It would be weird, wouldn’t it, if I sent her a message or called her up this morning and said, “Yes, but how do I spin?”

Chances are good that she’d hang up on me after an awkward silence or at least not answer my email.

I know, I know. Writing is not yarn-making. Spinning wool doesn’t tug on the direct, connective line to the past, to our memories, to our pain. Believe me, I understand.

And so, I amend my response: “You write. You gather your courage and you write.”

Often, when people have wanted to write for a long time and haven’t, what gushes to the surface when they begin is pain. Finally, we have allowed ourselves expression, we have cracked open a long plugged channel, and these things – says Pat Schneider in How the Light Gets In: Writing as a Spiritual Practice – have been under pressure.

In spite of fear, if we are writers, we continue to want to write. Our art dwells in the unconscious, and when it is denied, it is under pressure. When we intend to write the truth of what we have experienced or imagined, and set our pen to paper, the unconscious spews out invitation. Images. Concrete details that are clues to something significant …

Words gush forth, sometimes wildly. When I began free-writing as a daily practice in 1993 what came out were pages and pages and pages of pain, sometimes sketches and drawings, in the heavy, black, felt-tipped pens I liked to use back then.

I spent a couple years there – ill, for awhile, in B.C., then back home to live with my mother as the doctors tried to diagnose me, in part reeling, hindsight has taught me, from an assault that would hold onto me for years and years.

The dam had cracked and tumbled apart. The water flowed.

I still have the notebooks from those years but I’ve never revisited them. It was not until 1997 that my words began to spin into a fictional narrative, informed by true experience, as fiction always is.

I wrote the first draft of my first (unpublished, eventually abandoned) novel, The Second Self, in 10-minute daily timed writings which was how I had been practicing for years.

Just spin a few minutes each day, my spinning teacher told me.

People have been doing this for thousands of years.