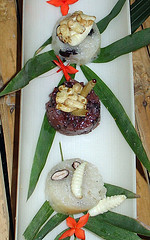 Every now and then, at dinner parties, over hors d’oeuvres and desserts, I like to raise the question: what’s the weirdest thing you’ve ever eaten? The answers are memorable. One friend snacked on groundhog in Ecuador while another sampled rotten shark, a delicacy in Iceland.

And then there are the bugs.

It seems a lot of people have eaten bugs while traveling. While in South America, I snarfed down a giant maggot sauteed with wild onions before being baked in a banana leaf.

A long-time later, I don’t exactly crave it, but the taste-test wasn’t so bad. And lots of people have tried chocolate ants or crunchy locusts.

Since only some twenty percent of the world doesn’t eat bugs as part of their regular diet, eating creepy-crawlies while on vacation is a common “when in Rome” activity. But some enterprising cooks, biologists, locavores and environmental activitists are starting to point out that a snack of insects is actually a very smart source of plentiful and sustainable protein.

I go into depth in my latest piece for Celsias.com, a story that made me ask myself ‘could I do it?’… What do you think? What’s the weirdest thing you’ve ever eaten and could you do that dish on a daily basis?