In Glen Affric, at the end of our third day on the trail, we stopped to camp beside the Allt Coire Ghaidhe waterfall.

Since that morning, when we’d woken up in a lovely campsite overlooking Loch Beinn a’Mheadhoin (which translates to loch of hill of the middle), we’d hiked about 15 kilometres, pausing at gorgeous Dog Falls, where a couple gave us water so we didn’t have to scramble down to the river to fill our bottles (before treating it, of course), and passing sadly through a forest of Caledonian pines that will soon be obliterated by hydro flooding. 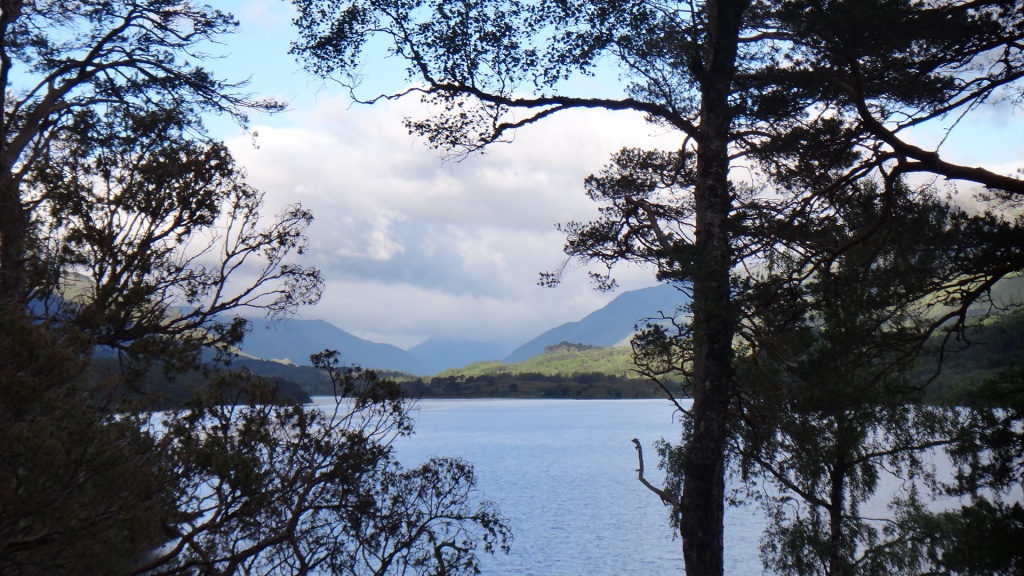 After we set up our tent, J. made a bench on the river’s edge using a board from the wreckage of the former wooden bridge set on two stones and we sat there, sipping our daily ration of whisky mixed with tannic peat water from the flowing river. The water, icy cold and churning, soothed our sore feet. 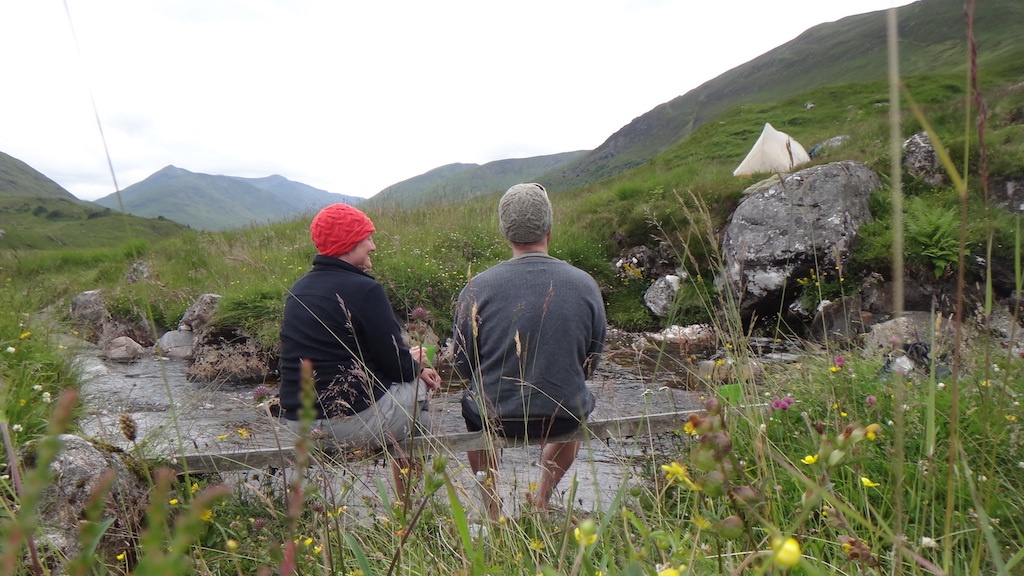 From that spot, we could see down into the valley, and on the other side of the shiny coil of the River Affric, there was a square of stones. The remains of four walls, I supposed, of a house pulled down with little notice during the clearances which purged that valley of the Chisholms who had lived there. 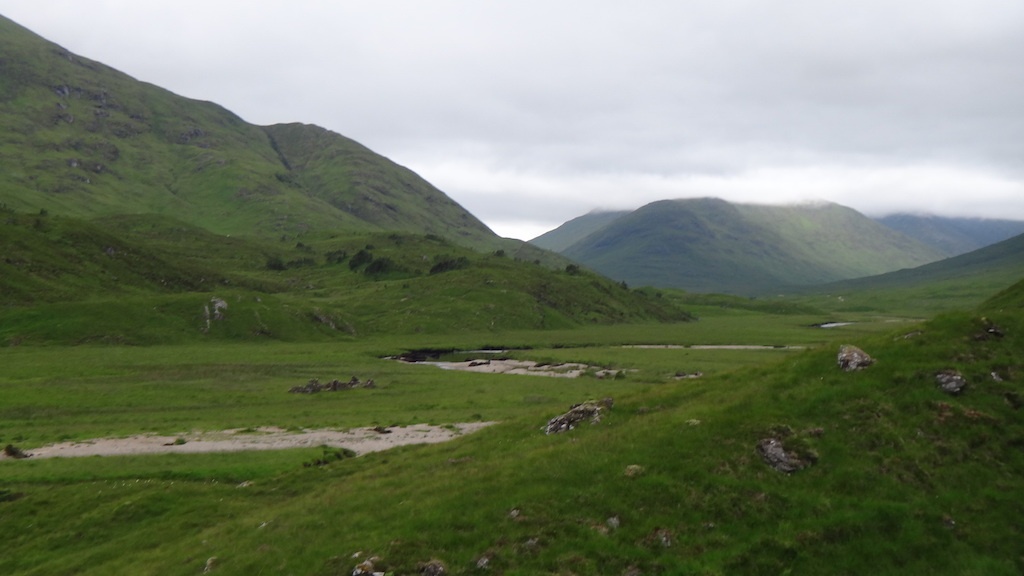 Stone ruin in the valley

That was their territory. That glen, full of a silent, brooding beauty, and other nearby places. Inverness, where businesses bear the Chisholm name, as do the lists of young men who died during wars at the riverside cenotaph. In the town of Beauly, where the ancient priory ruins is full of Chisholm markers. In the graveyard, two John Chisholm stones stood side by side, and inside, one sandstone slab was so old it was barely legible. 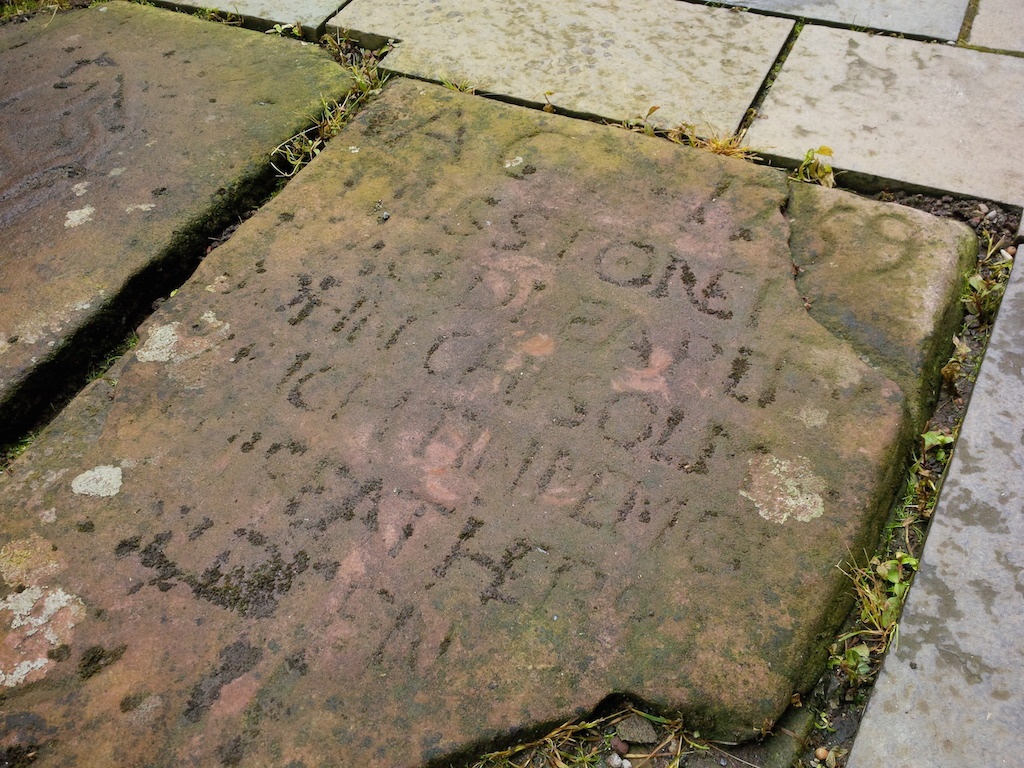 And, of course, in Struy, where we’d stood before 10-foot-tall carved Celtic crosses, erected for various Chisholms, in a small graveyard at the top of a forested hill, where a huge redwood stands, keeping watch. 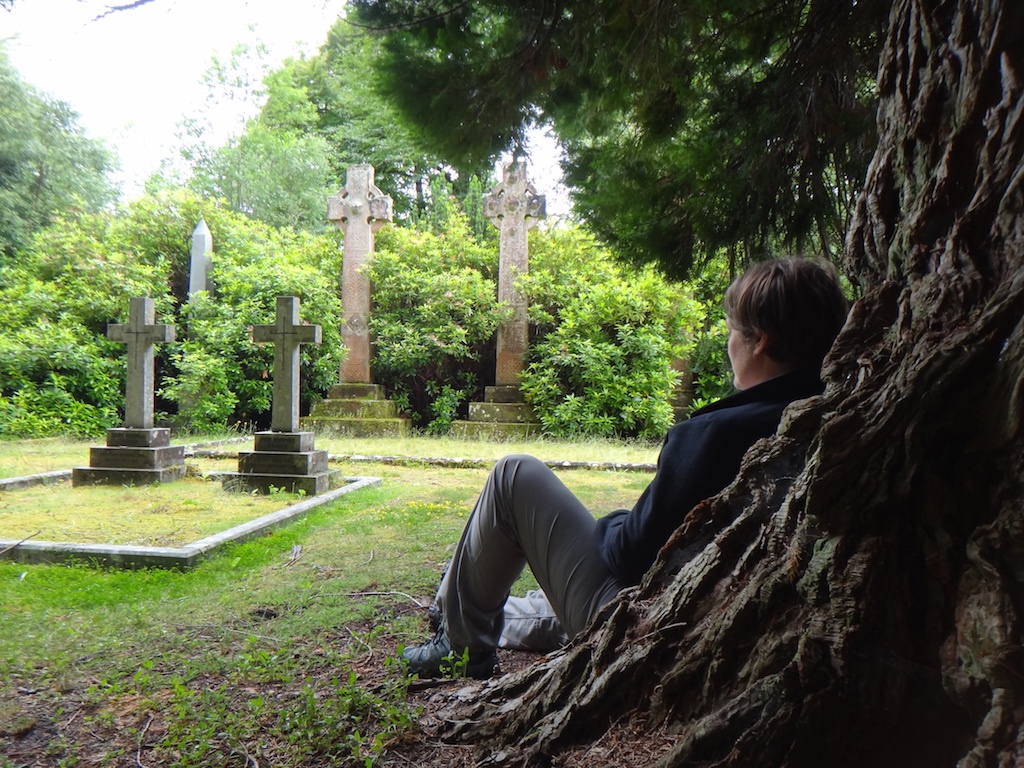 At the Chisholm graveyard, near Struy

All of them are relatives, somehow. Somehow connected through the branches of the family tree that kept on growing in Scotland after my ancestors left in 1753. But I hadn’t travelled there to find relations, to sift through records, to map more genealogy. I was there, rather, to get a sense of place, an idea of the landscape from which a piece of my genetics was formed. To learn the stories that created the people who’d left for Canada. And I found that. I found it in such a way that, only a week back home now, I’m still processing. 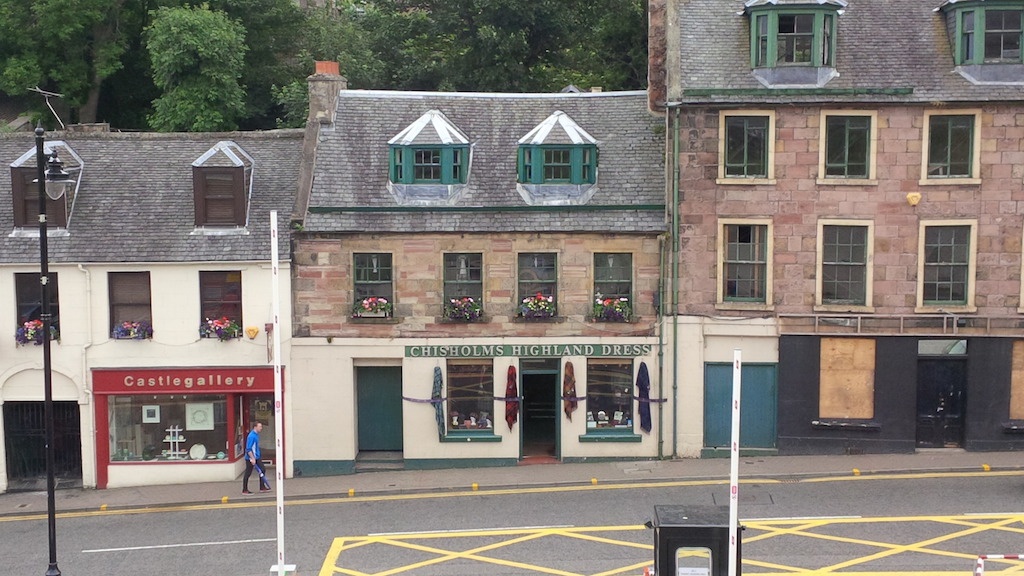 The next morning, the fourth day of our hike, we woke, got up, made our usual breakfast of coffee mixed with chocolate protein powder and oatmeal packed with trail mix. The midges were horrendous. Clouds of tiny, biting insects that are capable of creeping under any non-cinched hem and feeding for all their worth (I learned the hard way). 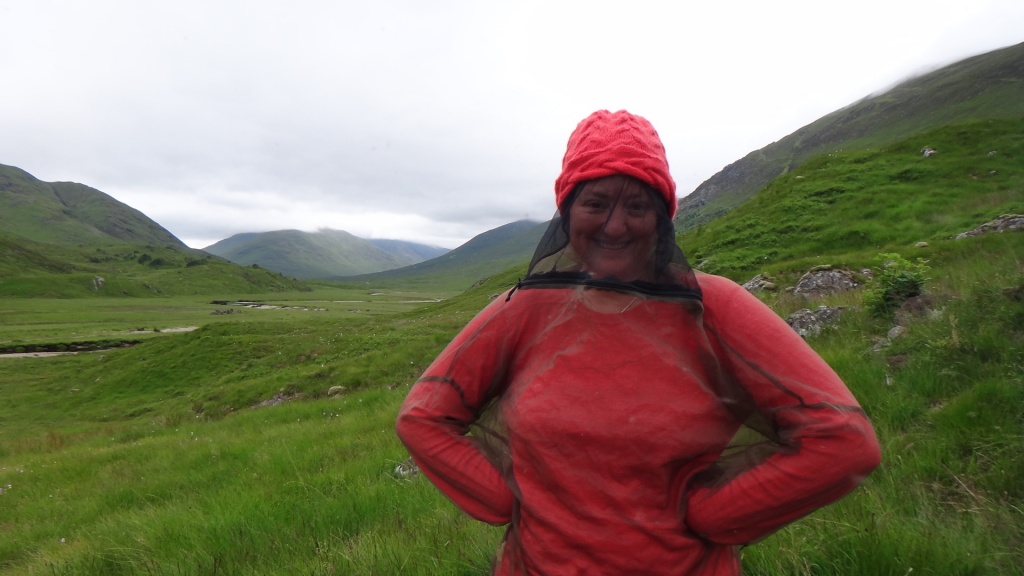 I don’t remember when it started raining. Some time during our slow, steady walk, arms automatically swinging hiking poles as we gazed up at the low white clouds misting the mountain tops and paused to take in the gleaming threads of waterfalls dropping out of the green, green hills. Such astonishing beauty mixed with hard things, a few of which we were experiencing: the bugs, the constant dampness and, then, the heavy rain. 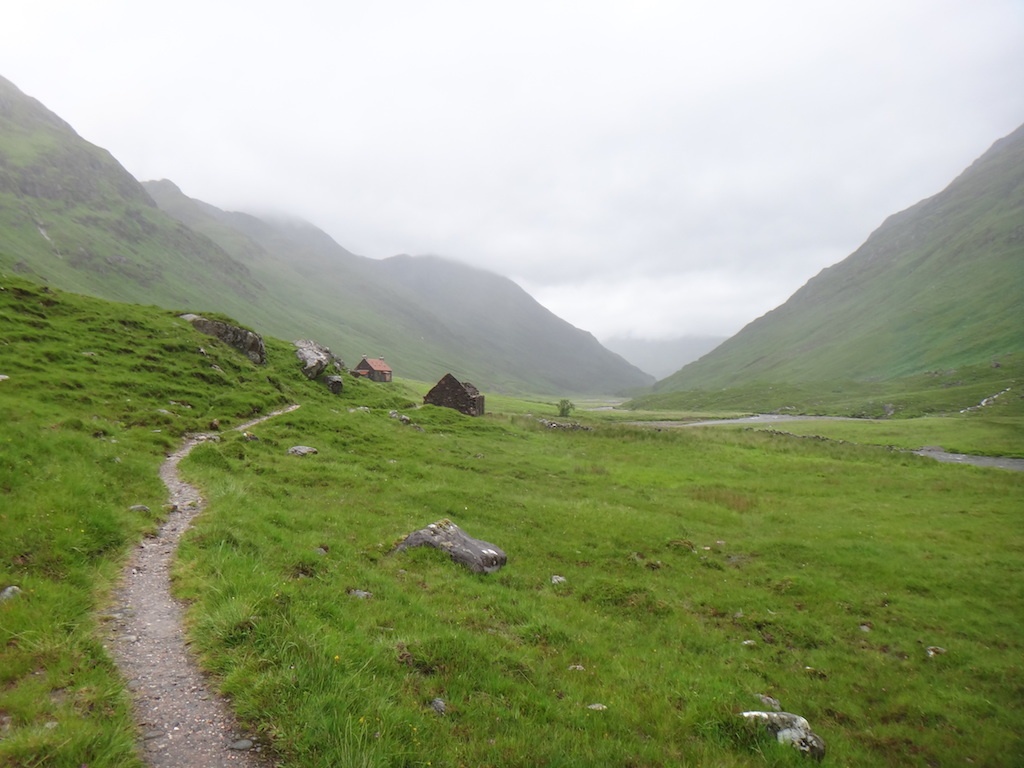 There was nothing to do but keep on. Out there, miles from the nearest road, it wasn’t like we had a choice. By the time we found the Camban Bothy (a building maintained to provide shelter for walkers), where the door was open, where the last hiker had left a Kit-Kat bar for whomever came next, it was lunch-time, and I felt great relief. We shed our wet jackets and fired up our stove to make tea and split the chocolate bar with a French couple who arrived shortly after us, also drenched. 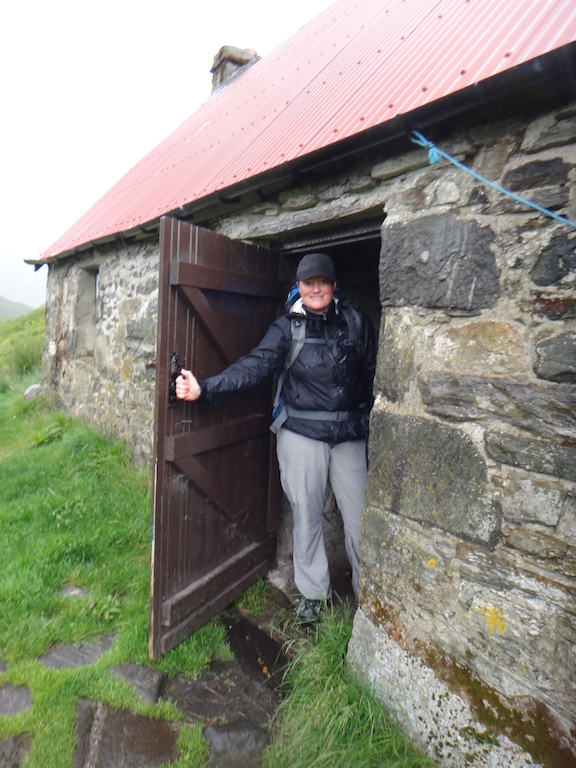 At the bothy: relief from the rain!

The trail got tougher after that. Slippery from the rain, and full of a rubble of shale and stones, it demanded slow, careful steps. We crossed, on stepping stones, a couple of waterfalls that barely paused as they flowed over the trail in their journey down the mountain side. We climbed up, up, up, into the watershed until, excited, J. pointed out when the water started flowing the other way. West, instead of east. We’d crossed a mountain range. 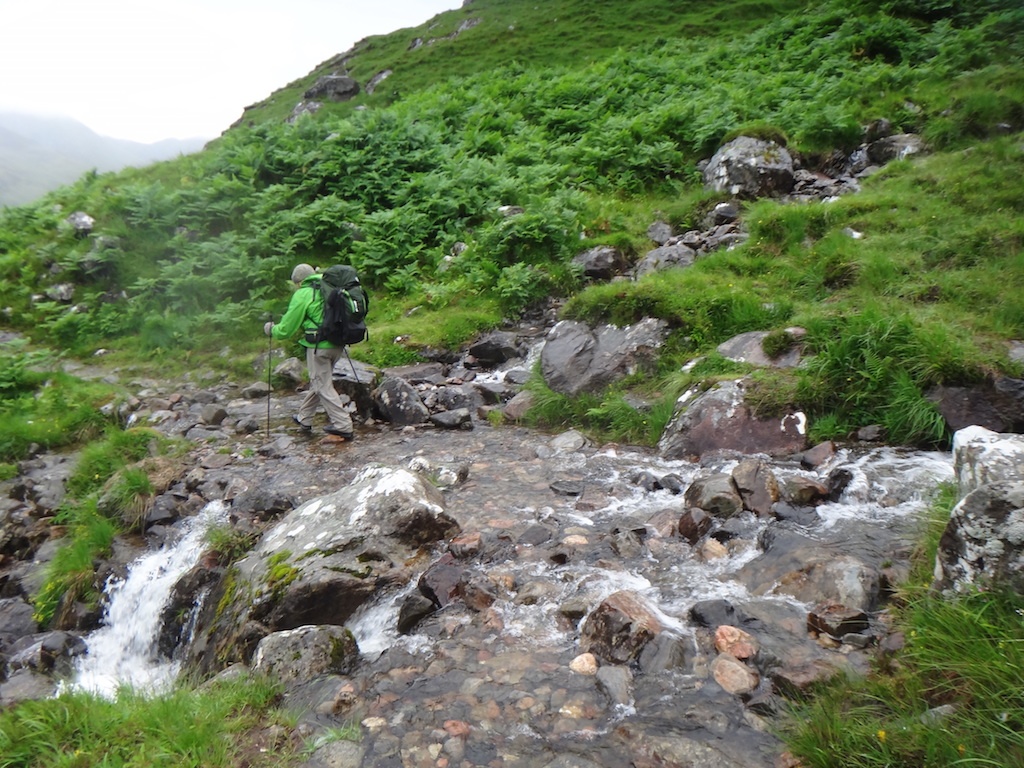 J. crossing one of the the waterfalls

By the end of that day, we’d hiked about 21 kilometres, picking our way along a track covered in sheep feces for the last few, as we aimed for the nearest village. When we finally got out to the main road, to the end of our hiking map, we weren’t even sure where we were.

At an intersection, we chose left instead of right and when we rounded the corner, there was the Heisgeir Bed and Breakfast with its sign reading Vacancy. They weren’t Chisholms, but we might as well have been family the way they welcomed us in immediately, took our wet things, and led us to a warm room for the night.

There’s a lot more to say, of course, but not right now. I’ve written three poems and have an essay in the works. The questions I think I’m circling around are: what does it mean to come from a place, a certain people, how does landscape enter the blood?

When I talked to my mother about this, she told me again the story of her friend’s grandmother who moved from Scotland to the Prairies and went insane, and now I’m not surprised by that. No doubt my own ancestors, even if they found the drier weather a relief would have missed the deep beauty of those mountains, those rivers, that glen. 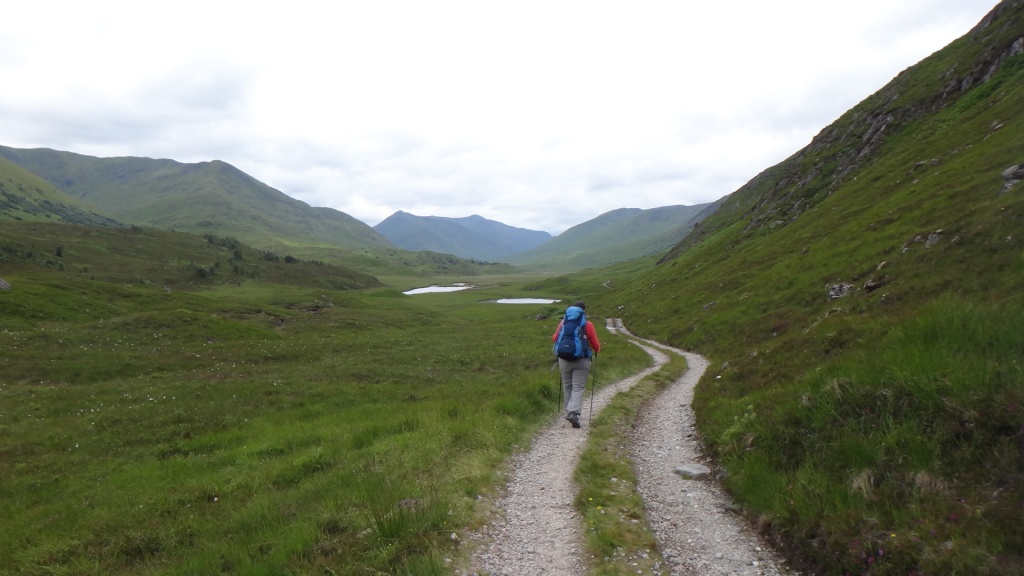 A picture’s worth a thousand more words, so for a bunch more of our Scotland trip, go here.