Picture this: 6 p.m. Friday evening at a table in the Legion (Fort-La-Party-It-Up) doing a shot of something red and treacly-sweet to celebrate the 29th birthday of a teacher I just met… Add to that one or two shared pitchers of Rickard’s Red and you end up with a lot of enthusiastic jigging with a banner-clad crowd of Fur Queen hopefuls by the end of the night (er, 10 p.m)! Me, that is, while J. played shuffle-board – or a table-top version of it – with a few of the guys. Probably wise… 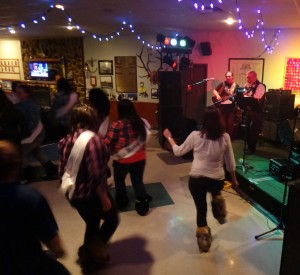 We bought a whack of tickets to the epic four-part meat draw – a Legion tradition, I’m told – but didn’t win a single gizzard. I’m assured, though, that these events – while not as extravagant as the Trapper’s Fest bonanza – are frequent, fun and a great excuse to socialize and maybe go home with a few groceries.

Saturday we managed to crawl out of bed, get the dog out on the river for a run (where he thankfully avoided finding any frozen fish heads), coffee up and make it in to town just in time to see the dust from the final lap of the World Championship Dog Race settling at the starting line.

Wandering through the sledders’ area we ran into a few new friends who had amazingly roused themselves early enough to line up for tickets to today’s beer fest, an event capped at 200 where prizes are given for hairiest chest (the gym teacher at J.’s school won last year), best bedroom eyes (male and female), shiniest pate, and a few other hilarious attributes. Wish we could be there but standing on the freezing cold sidewalk in the dark at 7 a.m. is a bit too the-new-I-Pad-is-out-!!! for J.’s and my taste… Well, that’s the official excuse but my morning headache might have told another story….

We did, after all, get to see a dog race (a first for me) – the Junior Race took off half an hour after we got to the dog sled area, with a bit of a wobbly start. One racer’s brake was stuck and another tumbled off his sled and had to run hard to catch up to his dogs…

After that, we headed over to Fort-Whoop-It-Up to watch a few of the King Trapper and Junior Queen Trapper competitions: the tea boil and pan bannock contest.

No easy feat: getting a fire going with a couple logs and an axe (think ‘shavings,’ lots of ’em) and keeping it stoked while balancing a pot of hot water or a frying pan… The winners were impressive: steady, patient workers who did not rest even when the flames were hot and high. You can see Rick Mercer hilariously try his hand at it when he visited The Pas.

The segment begins exactly where J. and I ended our day in town yesterday: on the frozen river, just west of the bridge, where we walked Mowat on a snowmobile track and drank our coffee-hot-chocolates from the Tim Horton’s drive-through that Mercer dog-sleds through in this clip: