I finished another big edit of Swarm yesterday, this one in conjunction with an editor at Brindle & Glass. A little bit more of that and then we’ll be on to cover art and it’ll be spring and our Saskatoon berries will bud and then, galleys! Lots to look forward to!

But last night I hit send on that email with the massive attachment just in time for J. and I to head downtown and catch the parade that launched the Northern Manitoba Trappers Festival.

The town has been abuzz for a week or so with excitement over the five-day festival. Started in 1914, this event is one of Canada’s oldest winter festivals and is a very big deal up here.

The northern fashion show started days ago with people wandering around town in their hand-crafted trapper gear: beautiful fur-trimmed mukluks, beaded moccasins, furry gauntlets (those big leather gloves that come up over your wrist).

Businesses and downtown buildings are decorated with facades of wooden slabs to make them look like log cabins and give the town that true rustic feel. The radio station is now Fort 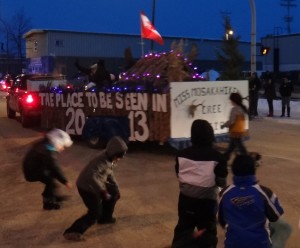 Crank-It-Up, the school division office is Fort Learn-It-Up, the Legion is Fort Party-It-Up, and the town office is (my favourite) Fort Pay-It-Up.

In the Giant Tiger parking lot, a log wall encases Fort Whoop-It-Up, where canoe pack, sled pull, log throw, tea boil, bannock bake and a bunch of other contests take place – several of which we’ll catch on Saturday, along with more of the World Championship Dog Sled Races, which started this morning.

Just past twilight, the parade set off from the Legion and we stood at the corner of 3rd and Edwards to watch. It was pretty great, most notably for the near total lack of slick corporate signage. Nary a Coke sign in sight! Most of the floats were homemade – spray-paint and Kraft paper (created, actually, at Tolko Industries, across the river) and a lot of wood.

Bonfires burned on flat-bed trucks and full-on log cabins floated by… as the kids rushed out with their shopping bags, prepared for the candy that hopeful Fur Queens tossed out into the crowd.

This morning, J. attended the starting gate of the First Lap of the World Championship Dog Sled Races with the kids from his school and made a short video. Enjoy!