total eclipse of the moon 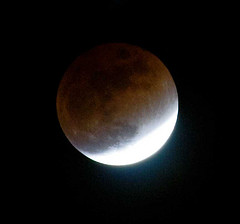 Last night, J. and I bundled up and spent a good hour, on and off, standing in our driveway. We leaned against our car and watched the sky. The solar eclipse started with a small bite out of the side and gradually, ever so slowly, the moon disappeared.

As it sank into the earth’s shadow, the aurora borealis appeared – odd, razor sharp white and green lights slashed across the sky. It was amazing. And oddly, on our street, we were the only ones outside.

Across the road, two girls occasionally stood on their second floor balcony, laughing loudly into the night and talking in that unique small-town dialect of Redneck about how “pretty soon there won’t be any Canadians left. It’ll all be immigrants.”

When I first went outside, I thought they were taking part, talking – albiet loudly – while they watched the show unfold. But then, at the very end, as the final sliver of glowing crescent was about to be swallowed up, they went back inside. They missed the final, hard-earned act. And I realized: they don’t care. They’re outside to smoke. They probably didn’t even notice.

I was glad they went away. This was no time for the mundane, not as we stood in the freezing cold, my husband with ridiculous bare feet inside his untied boots (he ran a hot bath when it was over) earning our quick glimpse of this special, momentary shift in the relationship between sun and moon.

The whole world was crisp and clearly defined – edges sharp, like they are in minus-20 degrees. Smoke from our neighbour’s chimney mixed with misty clouds floating over the sky, intermittently hiding the moon. It was quiet.

And in the silence, we watched the russet cloak settle on that normally bone-white star. I let it unfold, that amazed feeling of wonder at how small we are, settled in this tiny corner of the universe, facing an incomprehensible depth. And how big: able to recognize that depth, to gaze into it with wonder.