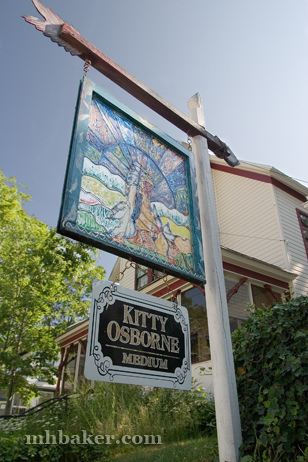 It started with a cheap date. On Friday night, Jason and I headed twenty minutes south to the big city of Barrie to treat ourselves to Starbucks and a stroll through the aisles in Chapters. While browsing the remaindered books I found an intriguing one by writer Christine Wicker called Lily Dale: The True Story of the Town that Talks to the Dead

, about a village some 60 miles south of Buffalo, New York that started as a Spiritualist summer camp and continues to be a haunt (excuse the pun) for modern day mediums and followers of the religion. It was $4.99. I bought it.

The next morning, while Jason slept in, I wandered around the house, drinking tea and glancing at various magazines. One of these was the October issue of National Geographic Traveler, signed out of the library. Daisann McLane‘s Real Travel column caught my eye. Now, often I don’t actually read entire articles. Like many magazine readers, I skim, take in half and move on. This one, though, was about spooky hotels. It was captivating and nothing else was calling me, so I read the whole first page and flipped to the next. Here’s what I found on the following page: “…booked. Sometimes my choice to stick it out has paid off in extraordinary ways. Many years ago, I remember reluctantly checking in to the Maplewood Hotel in Lily Dale, New York.” McLane goes on to explain what I’d so recently learned about the community: populated entirely by members of the Spiritualist Church, founded over a century ago.

I’ve written before about how strange coincidences and synchronicities seem to find me, so I wasn’t all that surprised. This was odd, yeah, but apart from moving us to rent the very scary hotel movie 1408 that evening, the incident came and went. Lily Dale, Lily Dale. The usual. File under weird.

Cut to Sunday morning and the random act of turning on CBC radio. I happened to catch the opening of the Sunday Edition as host Michael Enright was summing up the schedule for the morning. Seeing as it was so close to the Day of the Dead, the show was a special on, what else, death. You can probably already guess what’s coming next. In our first hour, he said…. In our second hour… And then: in our third hour, a documentary on a town where the residents speak to the dead. Yep. Lily Dale, New York.

The hair on the back of my neck stood up.

I’m not exactly sure what it all means, but I might just be crossing the border soon to check out this town that seems to be summoning.