thought of the day 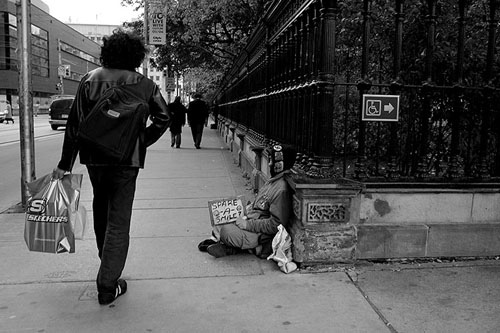 For all the people I’ve met who think Canada means Shangri-la in some other language… this comes from Toronto housing advocate Cathy Crowe:

..Yes, Canada is at war in Afghanistan. Since 2001, Canadian Forces have been fighting a war that has now lasted longer than World War II…

Our military spending will reach $18.2 billion in 2007-08, the highest annual amount since World War II.

Much of this is being spent on military equipment intended for the war in Afghanistan, like the $3.4 billion for four military transport planes and $1.3 billion for 100 battle tanks.

That $4.7 billion for arms could have provided at least 30,000 affordable homes for homeless families.

The military budget now represents 8.5% of all Federal spending. The Toronto Star reports that Prime Minister Harper intends to boost the Canadian Forces budget to $20 billion by 2010. This flies in the face of housing activists’ long-time demand that an additional 1% of the Federal budget, approximately $2 billion, be put towards a new national affordable housing program.

Homelessness and hunger are well documented and the most painful expressions of the poverty here in Canada. Surely, we should be demanding that our federal government put an end to it.

After all, as Gandhi stated, “Poverty is the worst form of violence.”

If there is such a thing as a moral war, I don’t think this is it.

To sign the Housing Not War declaration or to learn more: www.housingnotwar.ca.

Cathy Crowe’s newsletter is at http://tdrc.net/index.php?page=newsletter.