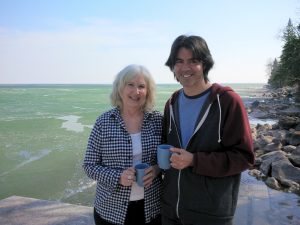 On Tuesday, I drove to the airport to pick up Garry Thomas Morse, a writer from Winnipeg who read last night as a special guest at the launch of The Pas Regional Library’s Writer-in-Residence program. Then we stopped in to meet Lorri Neilsen Glenn, our writer-in-residence, who’d arrived that afternoon in the north.

She’s staying in a gorgeous place on Clearwater Lake and as the sun spread its wide, pink arms over the water, we settled into soft chairs and chatted about publishers, poetry, promotion of books. I felt at home. I sipped a finger of white wine and grew excited about the six weeks spreading ahead of us during which Lorri will be here, teaching and talking about writing.

Last night, over a pre-reading dinner, joined by David Yerex Williamson (who joked that I was MC-ing and not reading because I only use two of my names) and, of course, J., we talked about the tribe of writers. How when we gather we somehow feel settled. I think it’s that we know we fit in, that if we opt to talk about what we “do” (sitting for hours at a time, staring inside our brains) we will be heard and understood.

This is so valuable and so important and yet what I’d really, really love is for the reality of being an artist to somehow be demystified, to fit in with an everyday reality; for people to realize that the act, the practice, determines the profession. 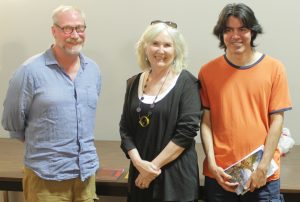 I am a writer because I write.

So, therefore, can you.

Tonight, Lorri is teaching the first of many workshops (see the brochure at the bottom). This one is on poetry. And it seems fitting, as surreal scenes of fire and smoke pour out of Fort McMurray, to be talking about the act of finding words to express that which seems inexpressible. Says poet W. S. Merwin:

[P]oetry is really to say what can’t be said. And that’s why people turn to it in these moments. They don’t know how to say this, [but] part of them feels that maybe a poem will say it. It won’t say it, but it’ll come closer to saying it than anything else will.

Lorri, Garry, and David said some powerful things in their readings last night, expressing grief, anger, deep love. Some lines still ring in my head. This morning, inspired, I turned to my own in-process poetry manuscript, and saw it with fresh eyes. Tonight, at the workshop, I will be thinking about that and poking my pencil at the page, just like everybody else: those who’ve never written a poem before, and those who’ve written a hundred.

Join us. Look inside your head. Become part of the tribe. 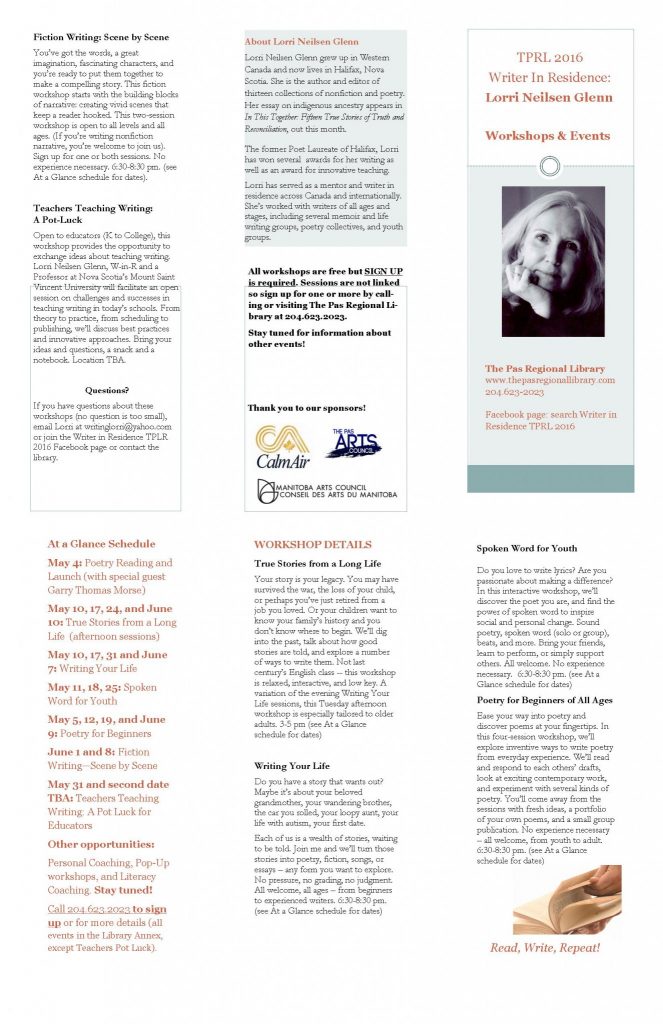