The Land That’s In Our Blood

My husband remembers his grandmother telling him that when she moved east to northern Ontario from the wide, bald prairie, she would climb trees.

I know why now.

Born and raised on a farmstead in Saskatchewan, she mustn’t have seen many. 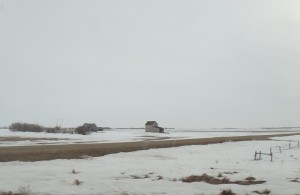 “…if there was beauty there, it was blanketed in isolation.” – Anne Lazurko

Located south of Regina, this is the landscape that Anne Lazurko writes about in her new novel Dollybird. Moira makes the opposite journey from J’s grandmother, arriving on the train from Newfoundland into a strange new terrain.

“I gave up on sleep and pushed up the window blind. The passing landscape was astonishing: overnight the train had left the forest, descended from the rock of the country and brought me to the vast nothing of Saskatchewan, the new prairie province with the strange name.

Beyond the tracks, fields of golden crops stretched to the horizon. A few cows dotted grassed areas, kept there by wood fences so weathered and worn they appeared more an inconvenience than a deterrent. Endless blue sky surrounded the radiant hues of late fall.”

Last Thursday, I read with Anne in Saskatoon. That morning, J. and I started in Regina, where I’d done an event at the university the previous evening.

We had every intention of getting up early to drive the short distance south to Francis, the community cited as his great uncle’s birthplace in his obituary. We wanted to stomp around graveyards, looking for evidence of his ancestors, but exhaustion and snow and many hours of driving, with more to come, waylaid us.

Instead, we picked Mowat up from his overnight kennel and carried on, driving straight through prairie before rolling down and out of the Qu’Appelle Valley and back into prairie again.

All that while I thought about my grandma-in-law.

Moving from such flat land and huge sky to granite cliffs and hills covered in evergreens must have been a shock.

But a good shock, J.’s father told me.

Marjorie moved east in 1939, following her fiance who’d found a job at the Matachewan Consolidated Mines. They were married in Elk Lake, Ontario, 50 kilometres southeast of the boom-and-bust mining town where she would spend most of her adult life.

It was an adventure.

“After leaving the dust storms of Saskatchewan and arriving in green Northern Ontario apparently Mom ran wild in the bush picking berries and exploring,” my father-in-law told me in a text. 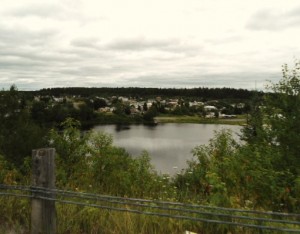 “Dad had other miners kidding him that she was going to be eaten by bears.”

Using lumber from an empty building at an abandoned gold mine eighteen miles west of town, they built a house on the flats.

They raised their kids there and eventually opened a hunting and fishing lodge that my husband’s parents bought and ran in the 1980s. J., his twin brother, and his baby sister were enchanted by the same wilderness their grandmother had also grown to love.

Landscape means so much.

Driving down the main street of a small Manitoba town during our time down south last week I found myself astonished at the size of the trees.

I miss Shield country – red-veined granite sloping into sparkling blue water – like I’d miss a dear friend (hence setting my new novel there), but the prairie made me long for any sort of forest. I felt a bit like Moira: “…if there was beauty it was blanketed in isolation.” It is not in my blood, and it was a relief to enter boreal on our journey home.

Before we left the prairie, though, we dug around to discover exactly where Marjorie’s family had lived. In the provincial archives at the University of Saskatchewan, we located the land grant records of Isaac Brock Tilt, J.’s great-grandfather, Marjorie’s father. 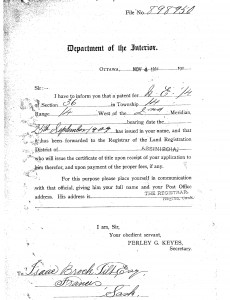 In 1909, he applied for – and received – ownership of 36-14-14-W2. Plug those numbers into this amazing site, which we learned about there, and you’ll see exactly where they were.

But like many labourers struggling to make a go of it, he also moved his family around a lot. The records show that he started out on one homestead and switched to another.

When asked on the 1909 application “Have you had any other homestead entry? If so, describe it and say what became of it” he wrote Yes – Can’t describe it – Abandoned.

The remains of farms, forgotten homesteads, empty grain elevators litter the prairie. There are hints of so many stories.

Just one is about a hopeful young woman who packed her steamer trunk to travel east into a wild woodland that became her home, another is about that abandoned farmhouse that lay behind her, a relic of her family’s prairie past.