The Neuroscience of a Paper Bag Day 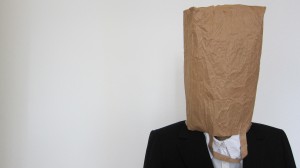 Yesterday I had what I call a “paper bag day.”

This is the experience of entering the world and interacting with other humans while feeling like you’d like to slip a paper bag over your head.

Over the years I’ve realized that I have these days more often when I’m deeply immersed in my creative work.

It’s as if the act of making up a world, that world’s characters, their internal experiences and the metaphors and imagery used to describe it all is enough. Don’t make me go grocery shopping too.

But it’s more than that.

Because, of course, those of you who are visual artists, who put paint on canvas or bend wire to make sculpture will also understand.

You aren’t writing novels, but you’re making something, dredging the material from your insides to craft a thing out of a block of nothing – and I bet you’re nodding your head, thinking about how hard the encounter with the world’s demands can be when you emerge from your studio.

So I wonder what the hell it is?

What makes the transition – from paying deep attention at the desk to engaging with people, buying kale and frozen French fries, going to the dentist, doing the things we need to do as regular people – so frigging hard?

I took it to Google. More specifically I took it to Eric Maisel, my mentor in the subject of anxiety and creativity (who, thanks to the support of the Manitoba Arts Council, I get to go meet in San Francisco this autumn at his Deep Writing workshop!).

Mostly, he talks about this transition from the other way around.

How there’s an expectation on us all day long that we be in control – that we keep the cheque book balanced, get to the car mechanic’s appointment on time, know where the kids are – and moving from that into the creative space where mistakes will be made (and are expected) and where things are not so neat and tidy is pretty hard. That’s why, he says, so many people who want to create, don’t do it.

His prescription for people struggling with making this transition is to find a way to move into a creative space while calming the anxiety that arises.

Maybe the answer is the same when moving from the state of story-immersion to the place where you need to look people in the eye and, you know, talk. I’m sure it wouldn’t hurt.

If I were to animate this circumstance, I’d have a character turning her eyes around. Pointing them inward while her fingers fly on the keyboard, then using those same fingers to rotate the eyes back around in order to make an egg-salad sandwich or get in the car and drive to work.

That’s simplistic, though. Yeah, the difference is in looking inward and gazing outward, but, of course, it’s not nearly so black and white or so robotic.  It’s some mysterious transition in brain function that makes for the paper bag day.

So, what is that? 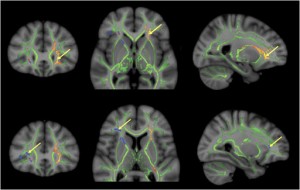 Turns out neuropsychologist Dr. Rex Jung is studying these transitions.

According to this American Public Media show about his research – Creativity and the Everyday Brain – he has helped define something called “transient hypofrontality.”

Says host Krista Tippet: “In layman’s terms, it’s now possible to see the difference between intelligence and creativity in the brain. We can watch the brain calm its powerful organizing frontal lobes and become more “meandering,” less directed, in order to make creative connections.”

Dr. Jung gives credit to his colleague, Arne Dietrich, from American University in Beirut for coining the term for a temporary process which allows “a freer interplay of different networks in the brain so that the ideas literally can link together more readily.”

Dr. Jung: “So with intelligence, you know, the analogy I’ve used is there’s this superhighway in the brain that allows you to get from Point A to Point B. With creativity, it’s a slower, more meandering process where you want to take the side roads and even the dirt roads to get there, to put the ideas together. So the down regulation of frontal lobes, in particular, is important to allow those ideas to link together in unexpected ways.”

And there you have it.

It seems that my urge for the paper bag is to provide protection for those vulnerable and day-dreamy frontal lobes until they can climb out of the beach chair, shake off the Singapore Sling and remember how to function in the world of quick thinking and logical function, tax forms and answering the phone.