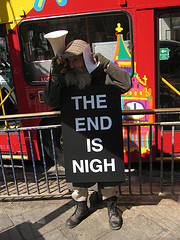 I don’t know if it’s because I recently finished re-watching the final season of Buffy the Vampire Slayer or all the bad news lately but if ever there was a time when I was tempted to grow a long, white beard and hoist a sign on the street corner, this is it.

The end, I told Jason this morning, is nigh.

I know, I know, it’s my own damn fault. As mentioned last week, I’ve started writing a post here and there for Celsias.com, a gig that’s keeping me increasingly invested in the chaos steadily creeping across the world.

My first piece was on Bill C-517, currently in the House of Commons, to enforce labelling of Genetically Modified Foods (for those of you Googling, as I was unsuccessfully, to find the date of the final debate and subsequent vote, it is May 6th, with voting on the 7th – had to call my MP for that information, as the issue hasn’t made even a squeak in recent mainstream media).

This led to a teary-eyed viewing (the last scene is a killer) of The World According to Monsanto (pour a stiff drink grab the bottle and stay away from all sharp objects for the duration of this film) and the compilation of an epic amount of information to try to convince my MP to vote in favour of the bill, despite his opposition. After all that, exhaustion set in.

Don’t get me wrong. I am not apathetic. I care. I’ve even been a tireless activist. In fact, for a long time I was out there standing against stupid environmental ideas like Adams Mine, getting people to sign a petition for free Toronto transit on smog days, running a neighbourhood newspaper, organizing peace rallies and lots of other stuff. But after awhile, I realized that I could feel my soul pooling on the floor beneath me. And I decided I needed it, all to myself. I had no quiet corners. And, practically speaking, it is, in my experience, impossible to be a writer without them.

So now I just write. Every now and then I leave the house. But for the most part, I am in my chair, trolling the net for the latest in travel, environmental and other news. Practicing my craft. This solitude is probably part of my problem vis-a-vis the whole end-is-nigh thing.

When I get out of the house, it’s nice to learn I’m not alone. This past weekend, J. and I went down to Toronto. We spent Friday evening and Saturday morning with friends. It was a great time; so nice to reconnect with people we hadn’t seen in a long while and just to hang out in the city.

Over local organic beer, I found myself talking about GMO foods. Quickly, my friend Lina’s boyfriend put his hand up. “I’m too worried we’re going to run out of water,” he said. “I can’t really go there.” The next day, my friend Phil interrupted the start of my sermon over diner eggs and homefries on the Danforth. “I’m on peak oil,” he said. “Sorry.”

Maybe I could have an end-is-nigh party, I thought.

This weekend, Jason and I are going to rent some, um, funny movies.

I’m going to try to remember how to laugh.

With that on the agenda alongside the first sail of the season and the opening of my mom and stepdad’s joint art show at the quaint Coldwater Gallery (if you’re in the neighbourhood…), it should be a fine last weekend should the hellmouth decide to stretch itself open anytime soon.