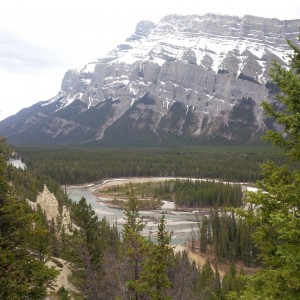 Hoodoos and mountains in Banff!

I come to this blog post after a confusing morning of writing.

I’m at that point in working on a novel where I’m dug deeply into the already-written draft, am adding new, necessary scenes, clarifying others, linking parts that seem obviously attached and cutting other early attempts to get at the truth of the story. In a word: rewriting.

Now that I know how to knit, it reminds me a little bit of tearing out rows of knitting to clean up dropped or otherwise untidy stitches: nerve-racking, and sometimes you lose track of where you are exactly.

Yesterday morning, after writing a long-delayed sex scene, I sewed the buttons on my second completed cowl scarf and met my friend M. at the curb in front of my apartment building. We drove west of the city, and the mountains appeared like a ragged hem on the horizon.

The last time I was there, driving that same road, was the summer of 1993. It was a turning point. I’d completed an agonizing second year of university and needed to take some time off. My then-boyfriend (and present longtime friend), D., and I were planning to drive out west when I got a phone call from U of T Press inviting me for a job interview.

I declined; my plans were made. I needed adventure, open road, to meet up with our dear friend A. who was living on Salt Spring Island. I often wonder, though, what direction my life would have taken if I’d gone for that interview. 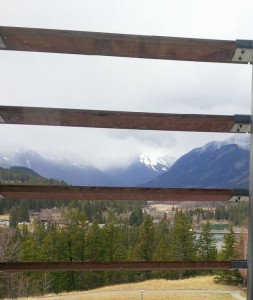 View from a seat in the Banff Centre Library

Bits and pieces of that drive, which we did in a Cadillac that we were delivering for a drive-away company from Toronto to a family in Vancouver, came back to me as the road rose into the hills, as the Bow River slid along beside us.

I’m a different person now, of course, some twenty-odd years later (!). This time, Banff was most exciting for the Banff Centre, which I’ve never been to. After stopping for some scenic views, we went there for lunch. A man came in, carrying papers, and sat at the table beside ours. M. leaned towards me. That’s Tim Lilburn, she whispered. We were celebrity-poet spotting.

We wandered the grounds, the dorms, through the arts building. I dreamed of being there, doing a self-guided retreat within the tall walls of the mountains, or consulting with a writer I respect. Some day.

Then, we went downtown to pop into a few shops. The plan had been to go hiking but the weather wasn’t great. It was raining on and off and, I admit, I was feeling lazy. Outside a typically kitschy Banff Canadiana shop, M. stopped me. We waited while one woman took a cheesy picture of another with a stuffed bear, laughing with them, and then went for our own cheesy moment. M. ushered me inside. We have to see the Great Zoltar, she said.

It was one of those glass-cased fortune tellers. His eyes glowed blue. I popped a loonie in and he said something about happiness, and out came the most specific fortune. Here it is – a promised letter coming soon – so that if it actually comes true, we can gasp in astonishment, together.

Driving home, I talked a bit about my new novel. The weird thing is, I’ve been thinking about letters, and writing some between the characters. Letters are on my mind, how they’re little time-capsules. When I said this, M. asked me, Which of your characters would consult the Great Zoltar? What a great idea, I thought. Which of them would want to know their fortune, to know what the future holds. 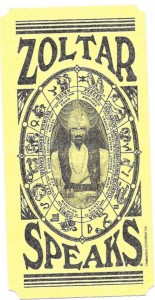 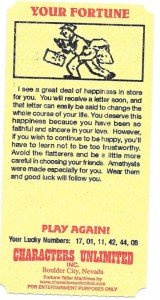