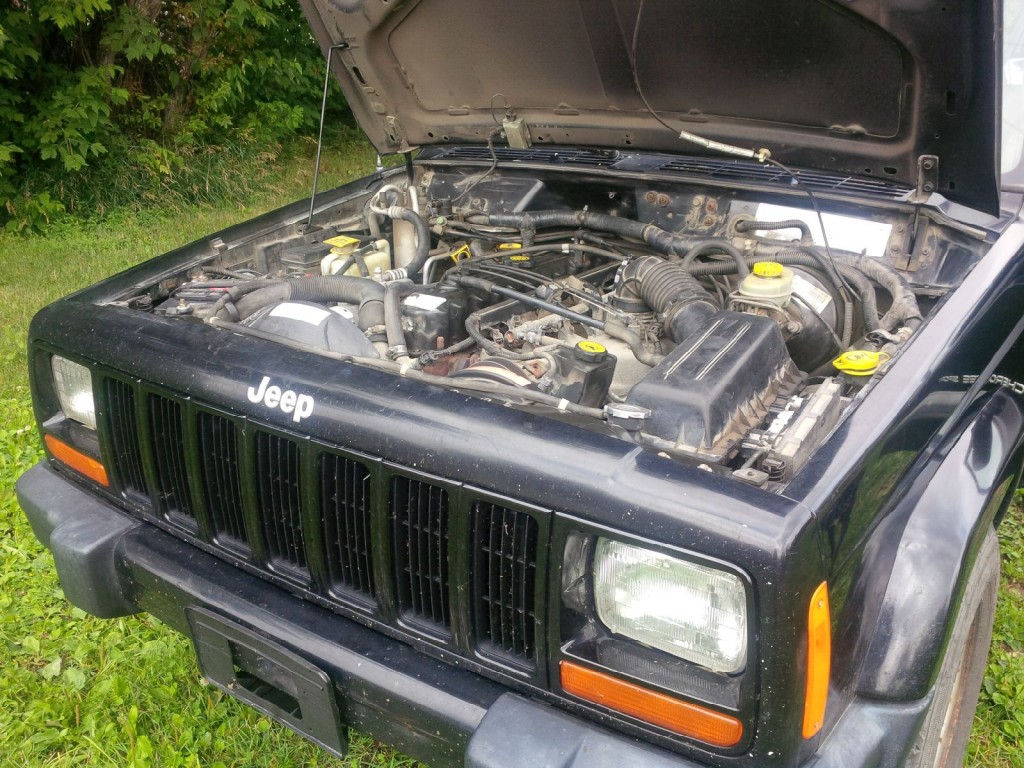 “Are you writing about the virtues of the 4.0 litre inline six?” asked J. when I took this picture. Sure, Honey.

I’ve been a bit scattered lately.

I’m blaming this on the summer. Not only is the weather enticing me outside (or was, before the rain started, not that I’m complaining), but my husband is home, and we are deeply engaged in our usual warm-weather activities: adventure-schemes and renovations.

A couple weeks ago, we woke up and started talking about our desire to get a second vehicle. My heart is torn about this because, you know, climate change, but I also regularly devolve into a house-bound hermit come the cooler months and having another car will allow me to zip the twelve kilometres to and from the library at a moment’s whim (I’m sorry, but that’s too far to walk when it’s minus-50 out).

Sure, I said, but of course it isn’t as simple as all that because, well, money.

J. had a solution.

Over the years, his seemingly natural talent in all things mechanical has really blossomed. I’ve noticed these skills since our early days, but holy cow, can he make things run. In our first house, he fixed our rattling, noisy sump-pump with a bent-open paper clip, and he’s only gotten better since then; here, he repaired the catch on our washing machine lid with instructions from YouTube and went on to order and install a new drive shaft in our Subaru when it fell out one day, mid-January, as I turned into the driveway. He’s taught himself how to repair barbecues, replace car parts, do electrical work, and more.

Thus, he didn’t want a new-fangled, everything-electronic and/or digital engine. He wanted old school. He wanted to dig in and get his hands all greasy. But he didn’t want rust. The solution? Drive west and buy a Jeep.

We’d been planning to head west anyway. All winter we’ve been talking about driving out to the Rockies and heading on to Vancouver and north up the coast, to visit friends and see the Pacific, which J. has never laid eyes on, despite being born in B.C. But this spring, the vet x-rayed our cat of unknown provenance and found a tumour.

Officially, she’s palliative, and needs lots of food to help maintain her weight and pills to help her keep that food down and eyes on her day-by-day in case she takes a turn for the worse. Unofficially, she’s fine: eats like a horse, and is even off some of her meds (the ones I have to shove down her throat at risk of a slashed artery) to see if she does okay. So far, so good.

So, of course, we took her with us.

“Your pets travel more than most people,” my friend said when I texted her. We left Mowat at the kennel we like to use in Saskatoon. He has never been to Alberta.

When I was a kid, we did this commonly: took the cats along on our travels. My parents had a tent-trailer, like we do now, so I knew it would be okay. And it was. Griffy settled in and made a space for herself. We even modified a cupboard so her litter would be out of the way, an idea of mine that’s like something my dad would have done. 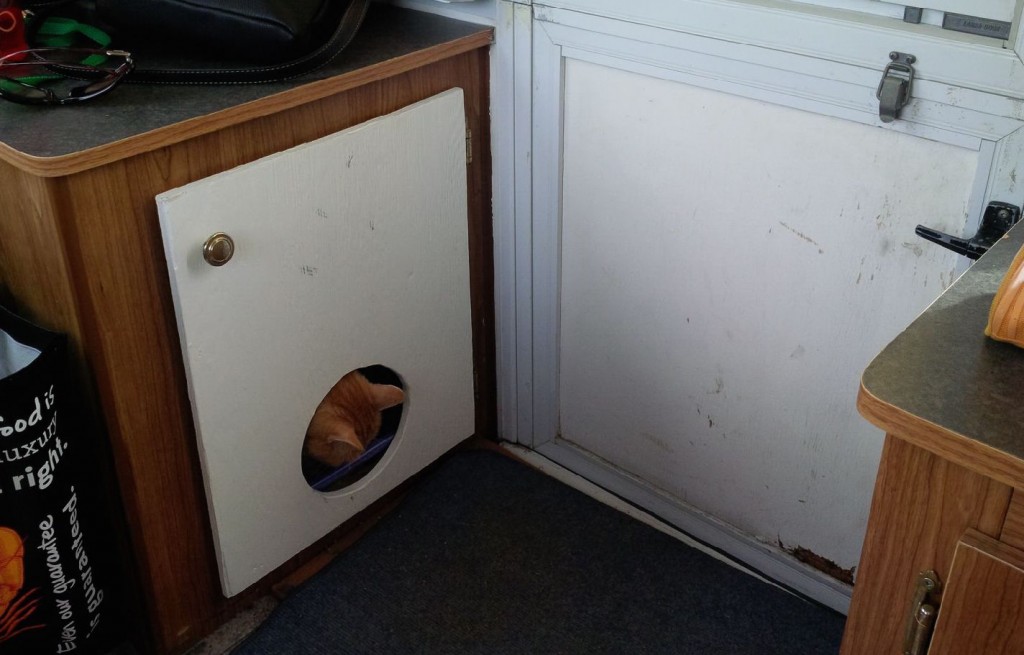 And then we started looking.

J. went on his own to see the first Jeep he’d found on Kijiji. When he came home, he described a guy covered in tattoos, a dead vehicle that needed its battery put back in before J. could even listen to the engine and test-drive the thing.

For the second one, I went with him. Our strategy: I would chat the guy up, giving J. lots of space to focus on his examination. He’s thorough, the owner commented in a light Irish lilt. He is, I said, then asked him what he did for a living. Oil and gas, of course.

That one seemed fine to me, but we walked away without even a test drive. Sick engine, J. said; he said he knew as soon as he started it up.

I think he knew as soon as he turned the key on the third one, as well. That engine purred like our cat once she’d found a lap on the long car ride, making me realize exactly how bad the previous one had sounded. And, hardly any rust. 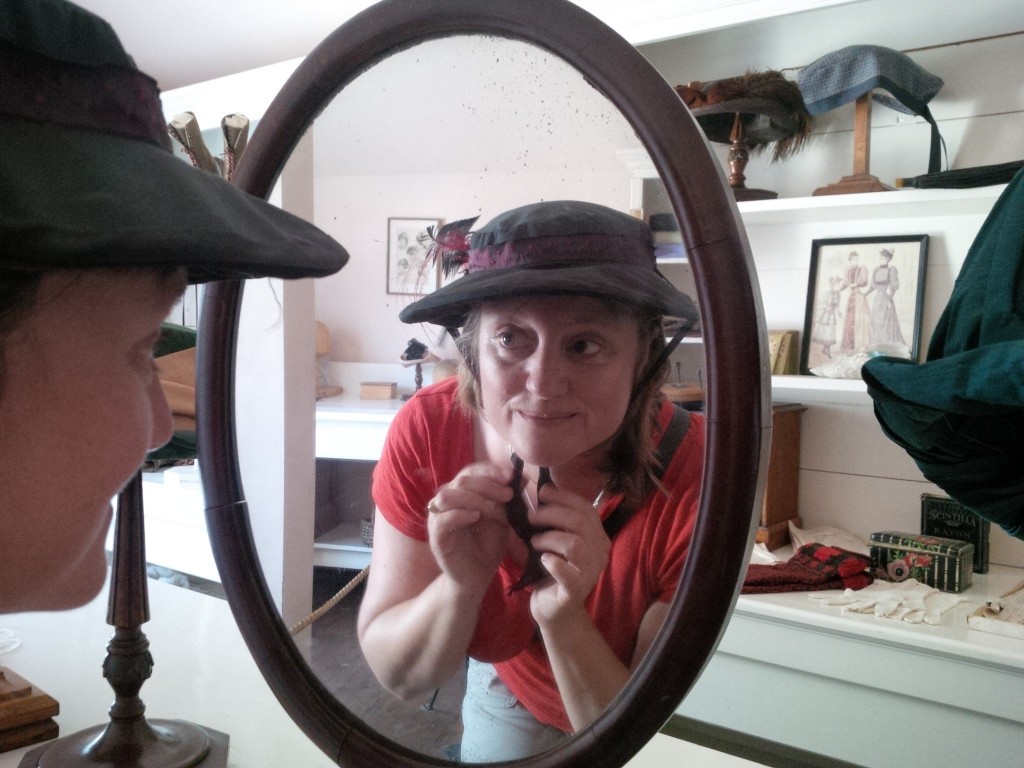 Trying on hats at the millinery at Fort Edmonton

So, we bought it: a new-to-us Jeep that came out of the plant the same year we met (2001). Then, we convoyed up to Edmonton (my apologies to Calgary friends for not calling but, you know, cat, camping, etc), where he’d been planning to see a couple others. It was the long weekend, thus, crazy, so we hunkered down at a campground with enough wild children they could have staged The Lord of the Flies, Boreal version.

And we did stuff.

Fun stuff like Fort Edmonton (best place ever for a history junkie like me!) and Scrabble games and cooking corn-on-the-cob in the coals and all-you-can-eat sushi and hiking and ice cream and the Muttart Conservatory and the West Edmonton Mall (which I’ve decided might actually be one of the levels of hell).

You know, normal summer stuff, before we hitched our wagon train together once again and headed home to finish house renovations. Hopefully, one of these days, we’ll get in a little bit more fun before school starts again (although, truth be told, I’m already looking forward to my own deep tinkering in the mechanics of my work, namely, this).