Last week, when J. and I were back in Ontario, we spent two hours one afternoon looking (in part) for gluten-free Worcestershire sauce.

It seemed ridiculous, and yet familiar.

Often, when we lived there, we would find ourselves setting out on hours-long missions to collect all the food and other items we needed or felt we did and bring them back to our home.

Don’t get me wrong. I’m not about to get all holier-than-thou and launch into an explanation of how up here in The Pas we live a purist lifestyle, distanced from the current capitalist mores.

When it’s not here in town, we can’t get it.

Life seven hours north of Winnipeg and an hour-and-45-minutes from the nearest Walmart and Canadian Tire means, simply, practicing the art of delayed gratification.

I’ve written about this before, about coming to terms with the lack of shopping opportunities, about turning my gaze instead to the backyard pelicans and the river as we walk along the shore with our dog.

But it’s way more complicated than that.

Because what I actually experience down south, coming from this place of what did feel like deprivation in the early days, is this strong sense of, in a word, seduction.

All those fancy things, right there for the taking, easily available at the perilous swipe of a credit card.

In Winners, buying a few gifts, I saw an adorable mug.

One of those ones that would fit so perfectly in the hand, its walls warmed by the first morning cup of coffee, that afternoon cup of tea accompanying a great book.

It was white, with an artful black sketch of a cow, and lined inside with my current favourite colour of aqua blue.

Seriously, it was magnetic.

I did not buy it, though. Mainly because I was already in line and the next person up, but I watched the compulsive draw inside me and I thought about that stupid mug – should I go back? – like it actually mattered far into the evening of that day.

In a grocery store, while on the hunt for the wooster sauce (which, incidentally, we never did find as it seems Lea & Perrins with their barley malt has secured the market), as if to compensate for not purchasing the cup, I came across a vast array of hot sauces and immediately snatched two off the shelf that I didn’t think I could get up here (one, it turns out, J. is allergic to which I would have known had I paused for two seconds to read the ingredients). 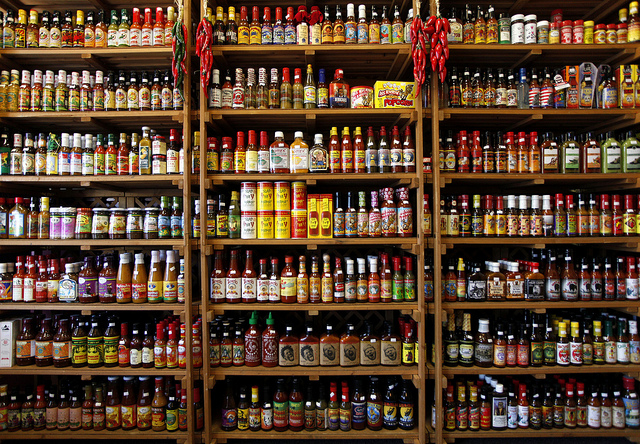 A world of hot sauces…

Years ago, when I lived in Toronto, when I was underemployed and writing and finally got around to doing my taxes, I realized that I’d somehow lived for a year on about $10,000.

I managed this, I came to understand, because I had learned to ignore the constant collage of pretty colours and shapes and shiny things that surround us in the contemporary world.

I learned to do without, to walk everywhere instead of taking the subway, to not dawdle in book stores or purchase clothes anywhere but at the Sally Anne. I used the library. I rarely went out for dinner.

Up here, the deprivation is not dissimilar (although there is the bane of Internet shopping) but it isn’t internally enforced. It isn’t a matter of choice. And because of this I feel more and more like we travel into another land when we go down south.

In that land, there are a million stores and if you can locate what you want in one of them, you can have it (provided of course, you have the money, either real or imaginary).

The contrast reminds me of something that happened to me in Santiago, Chile, when I was involved with the Humanist Movement.

A whole bunch of us were there, from Canada, the U.S., Hungary, Switzerland, Mexico, other places, for a meeting/retreat of sorts up in the Andes. And there was a guy, Jean Sylvain, from Cameroon, who had no money but had been, in a sense, sponsored, to attend.

One day, after we’d come out of the mountains, a bunch of us went wandering and found ourselves at a craft market and decided to look around and purchase a few souvenirs.

Standing on the outskirts of the busy market, I remember the expression on Jean Sylvain’s face as we all drifted inside, eager to purchase the exact right items for the people back home. Eager to shop. He looked annoyed and perplexed.

I retraced my steps a thousand times that day because I had seen a necklace I knew my mother would love but I never did find it again and in the process, discovered that my new friend had wandered off, that we all had gone our separate ways, and I was on my own.