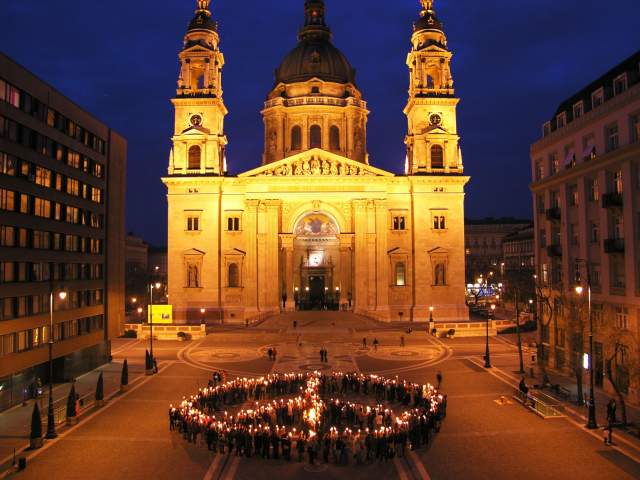 Saturday was an inspiring day for people who oppose war.

Among the many, many rallies and demonstrations protesting the war, activists in the Humanist Movement hosted living peace signs around the world to denounce the continuing occupation in Iraq, the ongoing battles in Afghanistan and, simply, the idea that war and violence ever really answers any human need.

Here in Orillia, we had about 40 people attend our event in the gymnasium of a local church, including a reporter from the local paper. In Kitchener-Waterloo, they had about 300 (although the newspaper only tallied 150). In Toronto, 1000. In Rome, 10,000! In El Salvador, 200.  Fifty people gathered in a Belgium village. 3350 in four locations across Budapest, Hungary. 400 in Buenos Aires, Argentina. In Burkina Faso, 250 people. 100 in Los Angeles.  200 in New York. And more, more, more (click on the ‘mores’ for images from around the world).

As Roberto Verdecchia, a longtime member of the Humanist Movement in Toronto said: “By coming together, we take that little flame nestled inside each of our hearts and we join them together and we make fire!”

And here’s what we said, in Orillia:

It is the fourth anniversary of the war in Iraq.

Today we are standing in the symbol of peace with thousands of other people around the world.

Today people are forming human peace symbols in France, Hungary, El Salvador, Toronto, a refugee camp in Ghana and many other places.

This is a quote by Danny Zuckerbrot, a longtime member of the Humanist Movement:

“My heart is pierced by every bullet that rips apart that one who, like me, simply finds themselves thrown into a game they didn’t choose. I am torn apart with every single person who cowers in fear or shakes their fist in helplessness. Even if I would, the tears I shed for that child cruelly slaughtered by a bomb don’t know how to distinguish between Jew and Muslim, between white or black, or Hindu or Sikh.

Many thousands of people have lost their lives in the past four years in Iraq, and many more have had their lives shattered and been traumatised due to this war. Many more in Afghanistan, Darfur and in other places in the world that are, right now, gripped in violence and death.

We have hope and faith in ourselves that our commitment to non-violence can create the change we want to see in the world.

This is a quote by Silo, the founder of the Humanist Movement, from a talk he did in Bombay, India:

In that same talk Silo said – “Treat others as you want them to treat you. There is no human act superior to this. When human beings understand this and carry it out in practice every day, and in every hour of every day, they progress and help others to progress with them.”

Treat others like you would want them to treat you. Almost every spiritual tradition, culture, and religion has upheld this golden rule as the most important practice for realizing a truly human society.

As we stand here for peace on the anniversary of the war in Iraq, let us renew our commitment to non-violence by deciding to make a daily practice of treating others the way we would want them to treat us.

Through this intentional practice of treating others as we would want to be treated we will nurture the hope and faith we have in ourselves and others that we have brought with us here today. We will build the peace that we all need, we will create non-violence in our lives and the lives of others.