Shaking Out the Knots

Rain smears my office window as I write this, as I wait for a pot of tea to steep.

It’s cold outside, and the smell of heat is coming off the radiator, and my dog is asleep on his bed behind me (having had two breakfasts, since J. and I seemed to be over-organized this morning).

After an incredibly busy autumn, I’m finally getting back to work.

This morning, I took a look at the chaos that is my novel.

I’ve got a draft on the computer, in varying stages of being edited and rewritten, and a notebook half full of new scenes written on the run throughout October, in writing workshops I’ve taught, and during quiet mornings in hotel rooms in Thessalon and Toronto, Ontario. 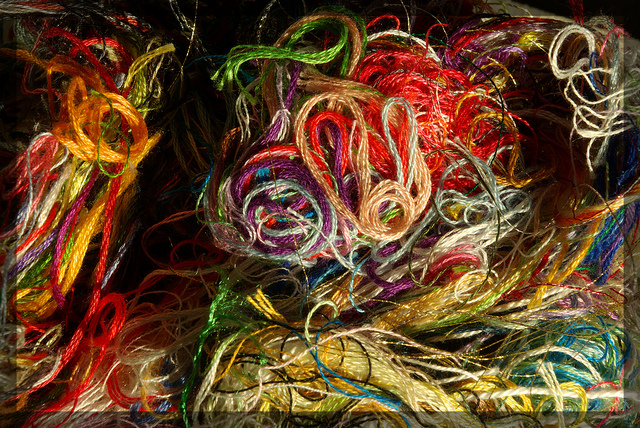 November, I’ve decided, is my NaNoFiMo – National Novel Finishing Month – so I’m tackling it, with the help of a three-month calendar on which I’ve written some deadlines, as per advice from Eric Maisel, who spoke about the importance of organization during the week I spent studying and writing with him in San Francisco last November.

During my time there, in the room that overlooked the bay and the ubiquitous red bridge on the other side of the harbour, I realized how much organization is a challenge for me. My desk is regularly heaped with papers to be filed, articles I’ve printed off and might never actually read, pages from manuscripts that have slipped out of order.

And even worse, I find, is the slumping into chaos of the story, inside my brain.

I remember going through this with Swarm.

How over and over again I wrote out plot outlines, attempting to tease apart the strands, like untangling a knotted skein of yarn.

Sometimes the plaits held fast and all I could do was walk away for awhile; other times they needed more help, and so I’d sit there, shaking the bound strings to loosen them, waiting.

Eventually it worked, and there’s nothing like that, is there?

The opening up of a knot you assume unmoveable, the wiggling in of a fingertip to draw open the loops. The sudden yawning space.

So, I’m prepping for that.

To start, I tidied my desk. I hung up my three-month calendar. I wrote the title of this novel on the date (December 7th) that I want to send it to my agent.

This morning, I dug through the draft: making yet another list of scenes, marking which scenes are more-or-less done, and which need to be entirely rewritten because (of course) one of the scenes I wrote while in Ontario altered the plot-line dramatically (for the better).

Or, at least, nearly done something, a version to be read by others.

I know this because in October, during those hasty morning hotel room writing sessions, I found myself writing the last two scenes of the book.

These were the ones that pushed out of the pen, meaning, I think, that my brain was coming to terms with the story, settling its arc.

So what’s left now is rewriting, reorganizing, repairing time lines, inserting back story, making corrections, and, over-all, packing more flesh on the bones of the thing so it can dance on its own.

I’ve given myself six weeks to do this: to shake out those knots, knit them neatly in, bind off, weave in the ends.