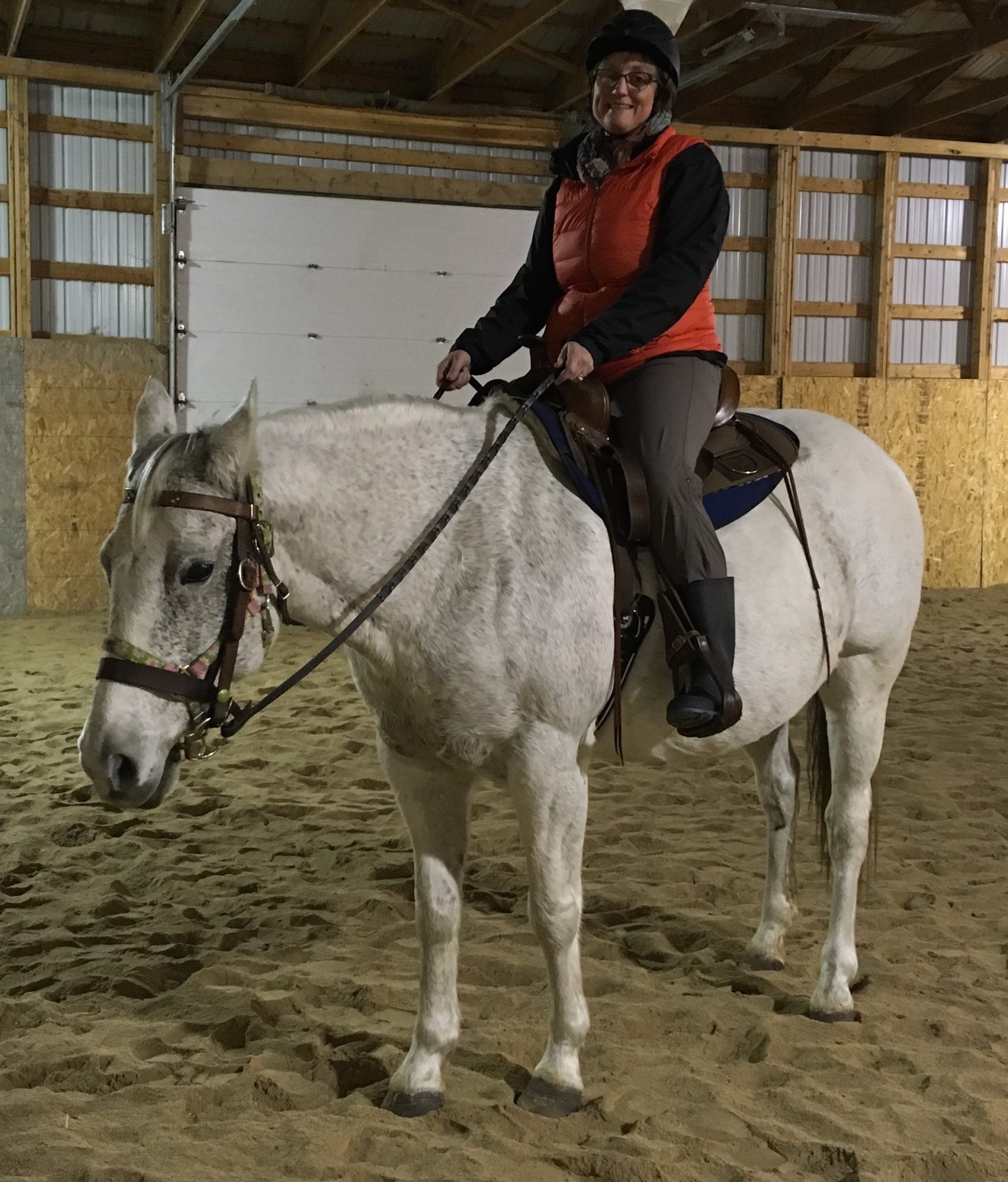 Last night, I got on a horse.

A beautiful white mare named Rosie with grey speckles scattered across her coat. Step by step, I got her ready: laid the blanket on her wide back, set the saddle, cinched it (over and over because some horses, like Rosie, appreciate the game of puffing up their bellies so the saddle slides off when they exhale – who knew?). I led her into the arena and climbed up and after that it was both easier and more difficult than I thought it would be.

Most days, I’m not really grounded in my body. I think this can happen when you live a life of the mind. Yoga, I have to write on my ‘to do’ list but I rarely get there. I’m chronically stiff, and if I didn’t have a dog who forced me outside for walks, things would probably be worse than they are.

Horses, I learned last night, require a physical connection. Over and over, my instructor R. (a terrific teacher!), told me to twist my shoulders and turn my upper body so the horse would feel the motion in my hips and know where I wanted to go. I could see why: whenever I dropped my gaze, Rosie lost our direction and started drifting, wandering over towards the hay bales stacked at the end of the arena or going over to visit R. Look where you want to go, R. said. Because then the horse would take me there.

I’d spent the day leading up to my lesson feeling a bit frustrated.

Last week, I signed up for a course to help me build an online program for writers and they’d warned me this might happen.

They’d talked about the Emotional Cycle of Change, a predictable pattern that can often occur whenever you start something new.

Yesterday, I hit the “informed pessimism” part of the journey. All afternoon, I stared down at my thoughts, letting them carry me hither and thither, wherever they wanted to go. It’s not a big deal; it happens. I’m not of a mind to banish all negative thinking because dark pondering, I know, I’ve learned, while not pleasurable, can actually help, and yesterday it eventually gave me some ideas about what my course won’t be (definitely not a program for anyone who thinks writing a novel can be effortless).

After my riding lesson ended – after I’d started sitting up straight, turning my body, feeling when the horse grew confused and responding so I was able to lead Rosie in circles around barrels and pylons and in diagonals across the arena, and after I’d cleaned out her hoofs, taken off her bridle and saddle, brushed her down – I realized something.

If I’ve learned anything from my practice (actually, my life…), it’s that those times when you ponder the moving beast beneath you, with seemingly no connection, frustrated and lost, are inevitable.

The drifting can sometimes go on for days or weeks or months, maybe even years, until eventually you (hopefully) realize that what’s required is to make a change.

To relax back in the saddle, straighten your feet in the stirrups, and turn your body in a whole new direction so you can start moving again, looking forward with intention and hope, guiding the animal that’s your work, your book, your life.