I’ve been working on edits of Swarm this week. Chapter 10, in particular. 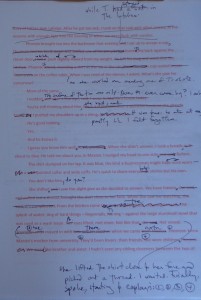 There’s a lot going on in this chapter, a lot of important stuff, but also, I’ve realized, several bits of prose that I’d fallen in love with but that aren’t actually all that necessary.

It’s called ‘killing your darlings’ – trimming those parts that you think are the best-ever, the most clever, the most brilliantly written (William Faulkner, the amazing American wordsmith, was the one who coined the phrase, I think).

Often they can get in the way of STORY – that unraveling of cause and effect that, let’s face it, makes people want to keep reading.

So I printed the chapter – because I edit best with pen on paper copy – and brought the thing over to the Hawaiian Diner for a couple dark mornings.

Fueled by coffee and bacon and eggs and eavesdropping only slightly to the chatting of the morning’s regular clientele about fires sparked by the current deep freeze and other town issues – I scribbled and thought and thought and scribbled.

As you can see, I’ve been working with black pen on red print-out, because I couldn’t find black ink for my toner anywhere in town (it’ll take a week to get here) and have had to rely on colour. But it doesn’t really matter – once inside the telling, the thing could be printed in rainbow hues….

Cut, trim, sand that bit off there, refine a detail here, and hopefully I will hold your interest longer, submerge you more deeply inside the story’s dream.