Last fall, I wrote a story. It was early morning, and I had the itch, and it was one of those great days when the thing just poured out of me. The draft I ended up with hardly needed any work. A few changes, a bit of shifting around, tweaks here and there, and I was done.

The story is called Places Like These, and it takes place in Lily Dale, New York, a spiritualist community established in the 1800s, where mediums attempt to connect with visitors’  lost loved ones.

A few years ago, my mother, my sister and I went there, in part to celebrate my sister’s 40th, and also because, like the character in the story (which you can read April 1st, when it launches on the Little Fiction website, but until then watch the trailer), I had strangely heard mention of the place three times in as many days.

When we were there, a medium mistook my mother for a widow.

We thought nothing of it, except how wrong (and then, later, we thought how strange to be sitting in a psychic’s kitchen as she cocked her head and said, puzzled, I see pie and books, and the three of us burst out laughing, because that seemed so much like my then-recently deceased uncle).

It was that, though, that idea of the widow, that came to me on the morning in October when I sat in bed with my notebook thinking about what I should write. 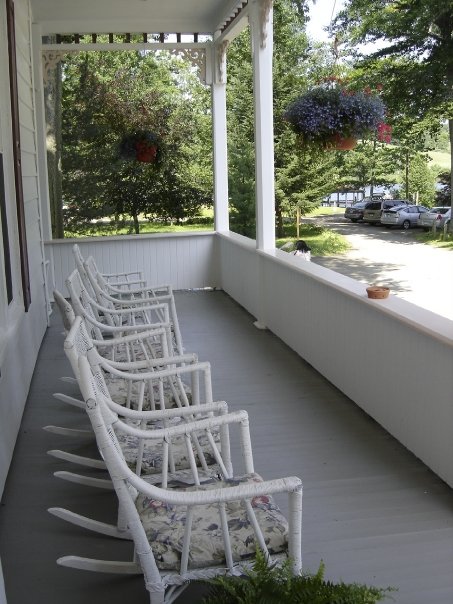 I closed my eyes; I let a scene rise to the surface. I saw the widow, not my mom, but someone else, someone me and not me, a woman struggling with grief who’d gone to Lily Dale and I saw another moment from my life, on a deserted beach, in B.C. I thought, what would it be like, to be so suddenly alone, so heart-broken, with beautiful places in your mutual past.

The last time, that fall, when I talked to my step-father, my throat clenched when we started to say goodbye. I choked out the words, I love you. When I hung up, I started to cry. It was unusual. In the living room, I said to J., I think I’m homesick. I think I need to go home for a bit. This winter, I told him. Maybe I’ll stay for a week or so in February.

I did do that, but with my mother, helping her, helping myself move through the white-blasted world, the winter terrain of grief.

In Places Like These the main character was with her late husband for almost exactly the length of time as my mother and step-father. The husband dies of a startling, sudden heart-attack.

In the story what I wanted was to capture the poignant pull of grief, of being between realities, and having to navigate these places of memory and pain, alone.

I don’t know why this subject matter emerged in me when it did, but I do know now that it echoed the future, it pointed to what would come, only a month and a half later, starting on December 16th, when my mother actually did become a widow.

Is it possible, I wonder, that when we step inside the trance of writing, we open the door to other sorts of trances: those that erase time, those that allow us access to deep understandings of many kinds?