Out of the Woods

Last week J. and I drove up past the 55th parallel, climbed in our canoe, and paddled part of the Grass River. 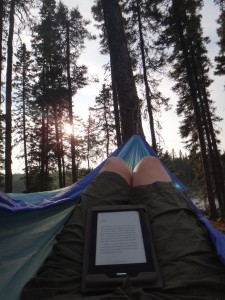 We put in at Pisew Falls and meandered downstream to Kwasitchewan Falls, on a route used for thousands of years by aboriginal people and fur traders who came in the 1700s in search of beaver pelts.

On Phillips Lake, we set up camp on the point of an island. From there, we could see the falls and heard its constant roar as we fished, read, made meals, played our travel Scrabble game and napped in the hammocks. Mowat dug holes and chewed fallen branches and swam and feasted on the buffet of chalk-white crayfish husks dropped by eagles.

Leading up to our getaway I’d been stuck. 25,000 words into the first draft of my new novel, I couldn’t figure out where I was going.

It didn’t help that this character came on the scene – we’ll call him Mark – who I couldn’t figure out, who seemed to have some secret. He scared the crap out of another character who actually looked for a place to hide when she saw him. I brought my notebook but I didn’t have a lot of plans to write, not wanting to push forward when I wasn’t sure where the path was. Instead, I wanted to wait for light.

Those first couple days on the island, a north wind pushed forest fire smoke our way. It was hazy and melancholic and in that atmosphere, I read. Turned the damp pages of Don Gillmor’s Mount Pleasant which sponged up some of the river when our canoe nearly swamped.  Then I finished The Buy Side and started Anna from Away, a novel that hypnotized me into believing I was ocean-side half the time with its detailed and precise descriptions of nature on the North Atlantic.

There must have been something about that: gorging on words, reading for hours in silence, staying away from the black hole of the Internet. By the third day, the wind shifted and the smoke cleared, and in the afternoon, sitting in the forest, my brain gave it up. The guy’s secret, the whole book’s truth, the hidden code of the thing. There it was, right in front of me, like a green thing cracking a husk. Eureka. Of course!

I skipped forward and wrote the last chapter out in the woods. A shitty first draft of it, I mean (thank you, Anne Lamott). And coming home is clearer. Because I’ve found the thing I’ve been waiting weeks for. It’s like it’s been there all along and I just needed to turn the right key in the right lock and open up the door…