One year ago today the phone rang in the dark, early hours of the morning.

It was my mother and sister, with the news that my step-father had surprisingly died the day before. To honour his passing this week, I’ve been literally working my ass off, as he always, always wanted – and, yes, expected – me to do. 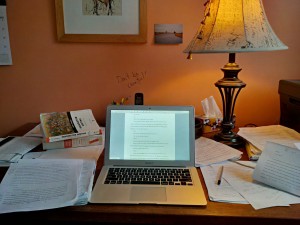 Are you writing? he asked every time we spoke.

It was always hard to stutter out an answer when I wasn’t. Easier, then, to get to work. And that’s what I’ve been doing: nearing the end of an advanced draft of my new novel (check out this pic of my desk: work-in-progress chaos).

But I also accepted a kind invitation from the good folks over at Little Fiction to join a bunch of others in creating my list of top 10s from 2015.

Any topic, they said.

So I decided to create a list of moments from the past twelve months (well, actually thirteen, but the first one is a doozie, even if it did happen in December 2014) that will one day probably creep into the collage of my fiction, in some surprising (to me) way or another.

P.S. Also, if you missed it, give my story Places Like These a read, which was one of Little Fiction’s most read stories from 2015.