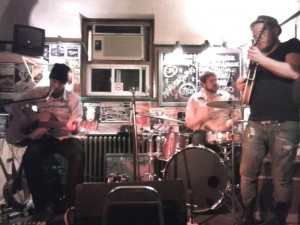 The Mayhemingways playing the Pig’s Ear

I started this past Saturday night sipping dirty martinis with an old friend under a framed map of Rupert’s Land. A bright red swath swept northwest, right over present-day Manitoba and up to where The Pas would be. A scrawled date in black ink said 17-something.

From there, I walked a few blocks west on Hunter Street, once scruffy and trod by hungover artists and actors when I lived there through the ’90s, now the official “café district.”

At The Garnet, I met up with more people, and we took the back way, through the parking lot by the long-empty home of the legendary Union Theatre, to get to the Pig’s Ear for The Mayhemingways ($3 cover!!!). We danced. We drank. I climbed into my friend’s bed just shy of sunrise.

I’d gone over, driving under a perfect blue sky, past fields dotted with red barns, to see said friend, a dear friend, a true bosom friend, if you’re familiar with Anne of Green Gables, as we both are.

P. and I met in 1997, late summer, when I moved into the attic of 17 Fleming Place, heritage row-houses that have pretty much been destroyed by the construction of a hideous building at the corner of Hunter and Aylmer that never should have happened.

I tucked myself up into the attic, painted all my battered furniture silver, draped my bed with a sheet of gold velvet salvaged from who knows where, and wrote every day for at least ten minutes.

I wrote my first novel up there, unfinished, unpublished, destined for a filing cabinet existence, called The Second Self. Really, it was practice.

During my time in the Patch this past weekend, I started to wonder, my mind dwelling lately on psychic phenomena (more on that in a few weeks), if it’s true what I’ve heard about Peterborough. That it exists, like Sedona, Arizona (where I spent a few intense days back in 1995) on top of an energy vortex. 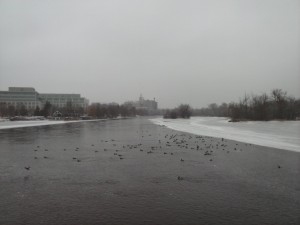 The river that flows both ways

I’m not a New Ager (been there, done that, to the point of reading and seriously considering a book whose writer claimed to channel aliens, I know, I know), but I have spent my most intense moments in that town, been seized by its currents, been shattered and built up again and soared in elation, as I did while dancing to The Mayhemingway’s cover of Bruce Springsteen’s Atlantic City, in the Pig’s Ear, on Saturday night…. Everything dies, baby, that’s a fact, but maybe everything that dies some day comes back…

Peterborough is not an easy place for me, in the sense of relaxing in the sun with one’s eyes closed. It’s a place where I feel deeply. It’s a place of shivering energy, of dense, blooming understandings and epiphanies, especially nurtured in my friend P.’s fire-lit, beautiful living room or as we walked by the river last weekend.

The river, as Margaret Laurence wrote, that flows both ways. Not in a simple, straight, predictable current but a deeper one: full of thick unwinding eddies, like memory, like the moments of a life.