Well, it’s official! News about my next novel has hit the internet…. This Has Nothing To Do With You will be published by Freehand Books in Fall 2019! Here’s the tweet from Freehand, making it official (click on the image to go to the announcement on my agent’s site). 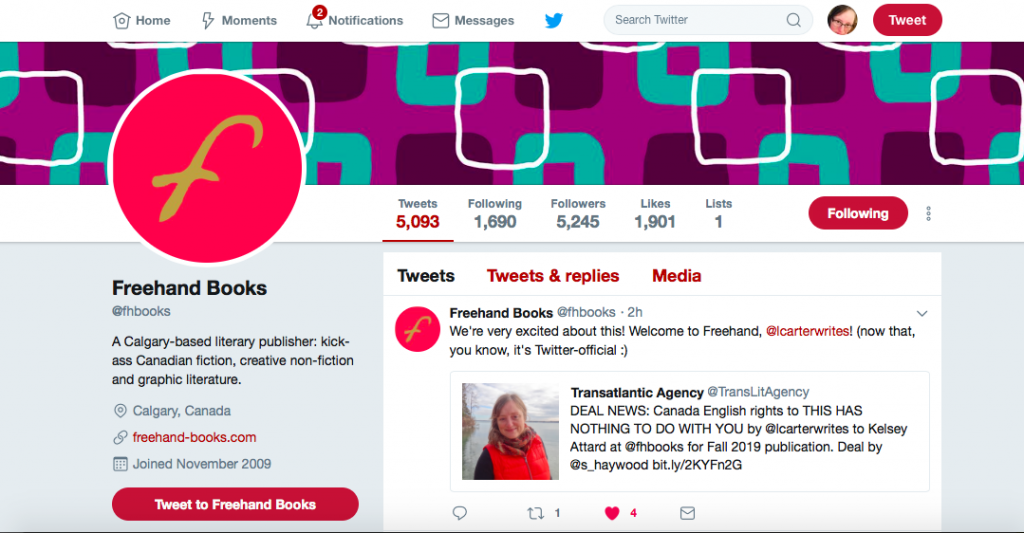 I’m so, so, so (SO) excited to share this book! Mel, my protagonist, is a character who burst into life, first appearing in a couple of stories, and then as a short story that wouldn’t stop, quickly becoming the first draft of this novel.

That was back in the fall of 2014, and since then she’s been with me in The Pas, during a two-month residency at the wonderful Alexandra Writers’ Centre in Calgary, and finally down here, near Winnipeg.

During all that time and the many revisions, Mel has grown and deepened, becoming more and more her own, unique self on her own individual journey. I’ve enjoyed spending time with her so much that I sometimes refer to her as my little sister.

Not that everything is perfect for her. Far from it. This book is an exploration of how we carry on, despite terrible things happening both to us and within the world, and how we’re called to do so with courage and without running away.

We struggle, we make mistakes, we witness, we fight, we hunt for some sort of peace… In Mel’s case (and her brother, Matt’s) this journey is extra difficult because her mother has murdered her father and she must come to terms with that sudden, violent act which occurred when she was on the brink of beginning her adult life.

In the months to come, I’m sure I’ll have a whole lot more to say about the exciting process of this book becoming, you know, a thing to share (cover art, event planning, etcetera!) as well as my poetry collection, Following Sea, which will be out before it, in February 2019, with Turnstone Press (including the long poem “Island Clearances” which won the 2014 ROOM Poetry Prize and which I wrote about here.)

Every book needs readers, though, and I’m truly excited for other people to enter this world I’ve made and tell me what they think about it – including, of course, YOU!

Thanks so very much for continuing to read my words and for celebrating with me! Next year will be busy and fulfilling, I expect! To be continued!