My Heart’s in San Francisco 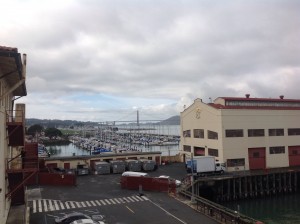 Fort Mason, with the iconic bridge in the background

This morning, it’s raining for the first time since arriving last Saturday in unseasonably warm weather for San Francisco. The whole state is in a drought but personally, I’ll take the warmth since the weather back home is in the minus double-digits right now, the Internet tells me.

Every morning I get up and walk north for fifteen minutes, towards the San Francisco bay, to Fort Mason, where soldiers and supplies embarked from 1909 to the 1960s before the buildings were turned into housing for arts organizations in the late 70s.

I take the elevator to the second floor (there’s enough hill-climbing outside) and settle in with about fourteen writers to ‘deep write’ with Eric Maisel, who I discovered when I was doing my MFA and struggling with a lot of anxiety around the act of such intense and constant creative demands.

This is normal, he said, he’s written.

Quite simply, the act of making art involves looking into the unknown, making choices we are often uncertain about, dwelling in chaos, and that produces anxiety. The trick is to do what we want to do (that challenging book with three characters, the one that moves between time-lines) and learn to manage the anxiety that arises.

I came here with a manuscript and I will leave with something much closer to finished (thanks to the Manitoba Arts Council, which got me here).

In our free time, we’ve been exploring.

Yesterday J. and I went to Telegraph Hill to look for parrots but found only small crows, a few hummingbirds. We climbed down to North Beach and grabbed cappuccino at Caffe Trieste where Francis Ford Coppola worked on The Godfather and Lawrence Ferlinghetti sipped espresso.

We browsed the books in City Lights and drank down a bit of bourbon in The Saloon, a dark tavern dating to the 19th century where the heavy wooden bar with its bronze rail has clearly seen its share of gold-diggers, poets, and down-and-outers, some of whom were in there with us.

There is a lot to see, and a lot to take in. On the northern edge of The Tenderloin, the city’s slum, a man in a wheelchair with his leg amputated above the knee, and hands black with dirt, told us about his cancer, caused by napalm, he said, and then asked if we knew what that was. A word forgotten in a city that once rallied around it, I guess.

On the bus back from Land’s End and the ruins of Sutro Baths, I saw a scrawl on the bus shelter map: the Tenderloin circled in magic marker, the words “This is the real world. Go back to the MF suburbs.”

It is the real world down there, and in a radius spreading out from Market Street. In a park across from the Ferry Building where I bet hippies once gathered, people live with their belongings: suitcases of stuff, perhaps pulled from a foreclosed house.

Where I am is in the Marina, down from Pacific Heights, so it’s safe, and wealthy, judging from the stores and restaurants around me. There are many beautiful sights to see – the deep orange bridge, the jingling trolleys – all over this town but San Francisco is a city founded on unrest and that unrest remains, it seems, with echoing economic realities impossible to ignore.