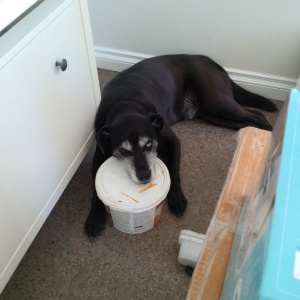 I just remembered it’s Thursday, my blog day. Sitting in our empty house, in the dining room where Griffy peed all over the floor when it was just plywood and studs and we’d gone away for a few weeks (our poor cat-sitters…). Mowat’s beside me, catching some zzzz’s, and J.’s gone to tow our boat to our rental house while we wait for paint to dry so we can put the finishing touches on the last renovations written into our sale.

All our stuff’s gone though. This past Tuesday we hauled it out of here with the invaluable help of three friends. We moved everything we own with four vehicles and a 5-by-9 trailer rented from U-Haul (we had originally booked a truck – does the ‘U’ in U-Haul stand for ‘unreliable’? I think maybe it does…) 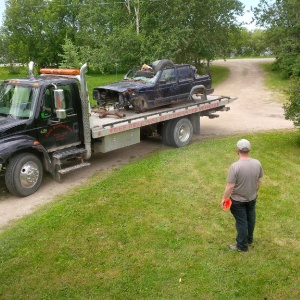 Saying goodbye to the Heap.

Beer, a hot tub soak and a hard sleep later and we were ready to get back to work. J. called a guy and waved farewell to the Heap (our affectionate nickname for the parts Jeep from which he’s scavenged numerous parts, including the engine, now on a palate in our rented garage, to be moved south to Winnipeg). We did a dump run. And now we’re cleaning, preparing to finish up the final reno, and getting ready to lock the door on this place for one last time.

But not without poignancy. I look around and see memories. The oak threshold for the dining room that J.’s dad helped us make and stain when he was visiting one summer. The walls in my writing room that I painted orange that first dark winter. The driveway where my mom and I waited at 3:30 a.m. for a cab to take us to the station to catch the train to Churchill. The backyard party we had for J’s fortieth birthday. The river across the road from us that we’ve watched through all seasons and traversed in winter. The deck we doubled in size to enjoy on summer evenings. Under that deck, the spot where crazy Mowat froze his tongue to a ladder when he was six months old.

Tim’s here too. Phone calls as we were reading our uncle’s book together. Discussions about a T.V. show we were dreaming about writing. Arguments. The kitchen floor where I fell to my knees when the police officer told me that he was dead. Changes like this, like moving, bring me further from him because he’s not here to know where I’ll be next and that makes me sad.

On Tuesday, I was thinking this when I got in the car to go grab lunch for everyone and the song that popped out of the radio was Every Breath You Take by The Police. Those lyrics: I’ll be watching you… (The Police was Tim’s favourite band – I have his threadbare concert hoody, carefully packed, ready to be hung on a hook in my new writing room).

However, life – of course, as they say, as is obvious – goes on. This tangle of emotions also contains a whole bunch of excitement. J., who’s pretty much become a self-trained mechanic since we’ve lived here, will finally have his own big garage, and I can’t wait to see the room (or outbuilding?) where I’ll be working next and, hopefully, a big kitchen. We’re also dreaming about a large enough plot of land to host writers/knitters/humans on retreat – but we’ll see if that’s in the cards…. For right now: onward, into the future, while holding the past.