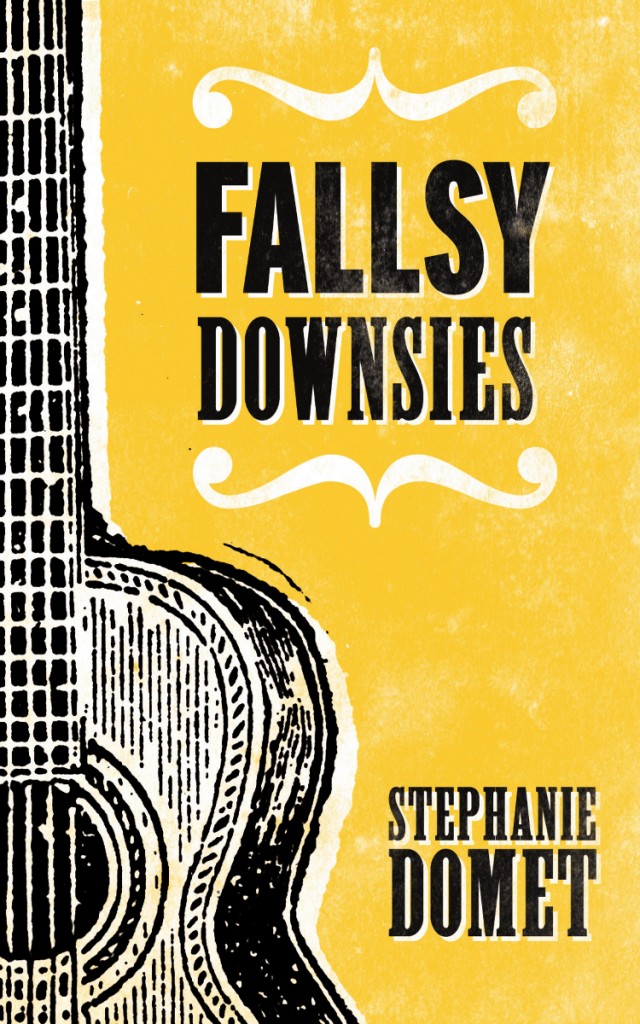 Fallsy Downsies was born in an old bank vault turned secret after-hours drinking room below a pub that no longer exists, in a small town in rural Nova Scotia.

It was after a fundraising show that had been organized by the songwriter Steven Bowers, and had featured my husband Kev Corbett and about half a dozen other songwriters, including our friend Dave Gunning, who told us—late in the night, after a number of pints—about his first job in music, playing bass with Stompin’ Tom Connors.

More properly, Davy told us the story of the job interview.

A phone call, in which Stompin’ Tom informed Davy he’d need to stay up and drink till Tom was through his own nightly allotment of beer, because Tom hated to drink alone. Then Tom asked: Yuh can hold yer liquor, can’t yuh? Cause we don’t want any fallsy downsies in the band.

I felt the heat of that phrase on my face. I turned my head to Kev. He was already looking at me. “Whoever gets there first gets it,” I said.

Kev spent the next two weeks trying to convince Bowers they should start a band called Fallsy Downsies. Bowers (and I) told him that was a terrible name for a band.

I started pulling together the threads of the book that had been gathering in my mind for a few months at that time, and named those threads Fallsy Downsies.

I knew people would try to figure out who Lansing Meadows “is,” so I strewed my novel with names of likely suspects—Murray McLauchlan, Ron Hynes, Gordon Lightfoot. But I forgot about Stompin’ Tom himself, somehow, until he died and Dave Gunning was suddenly everywhere telling that story. So, at the last minute, before the book went back to my editor a final time, I wrote a scene in which Lansing Meadows remembers being at a Stompin’ Tom gig at the Legendary Horseshoe Tavern in Toronto. Lots of fun. And people definitely still ask who Lansing is based on.

There Will Always Be a Small Time by Corin Raymond

I was about three years into writing Fallsy Downsies the first time I heard this song and I. Just. Froze. How was this Corin Raymond guy saying in six verses what it was taking me years and years (and years, eventually) to get down on paper? This song was a bug in my brain while I was writing. This link isn’t technically the best version, but the preamble Corin does before he starts singing sums it up exactly.

I was lucky enough to interview Ron a few times in my old life as a CBC radio host. When I was first writing Fallsy Downsies, I was fascinated by Ron and his career. He had this song everybody knew, all around the world, no exaggeration, yet he wasn’t nearly as famous as his song. In fact, it’s often thought of as a traditional Irish tune. But he wrote it in Newfoundland in the early seventies. I wondered about his relationship with the tune. Was he sick of it? Did he resent its fame? His answers (“definitely not”, and,  “are you crazy?”) were massively instructive to me in thinking about Lansing Meadows and his relationship to his famous tune On My Honour. Thanks Ron. Rest in peace.

No Change in the Weather by Ron Hynes/Murray McLauchlan

A double-dose of the great Ron Hynes. There’s a scene in which Lansing Meadows, playing a terrible gig, turns this folk song into a blues song. Later, I realized there is a blues song called No Change in Me, that uses basically the same lyrics. I must have heard it somewhere and thought I invented it. Gotta laugh when that happens… or you’d cry, I guess.

This song gives Dacey Brown one of my favourite moments in Fallsy Downsies. She’s at the wheel, with Lansing asleep in the backseat and Evan dozing beside her. Hey Nineteen is on the radio and she’s singing along, belting out the lyrics she’s always misheard as “the werewolf goes/the fine coat running/make tonight a wonderful night.” The lyric, she comes to understand, is actually “the Cuervo Gold/the fine coke running/make tonight a wonderful thing.” She vastly prefers her own version.

Even if Steven Bowers weren’t a good friend of mine, I would still love his songs forever and ever amen. I watched his dynamic with Ron Hynes and stole bits from it like the magpie thief I am, and some of that informed the relationship between Lansing Meadows and Evan Cornfield. Also, Steve was one of my book’s first and most enthusiastic readers. Also, he wrote this song inspired by my first novel, Homing, and every time I hear it I am overwhelmed anew. When Steve plays live, if I’m handy, he’ll haul me on stage to sing the B section of this song, and that experience gave me an appreciation for the kind of stage fright Evan Cornfield is dealing with.

My characters spend the entire novel in a car—which meant I spent a lot a lot a lot of time also in a car, both in real life and in my imagination. This song is a true story about life as a touring musician. I know that for sure because my husband wrote it.

Go here to listen to the whole playlist on Youtube.