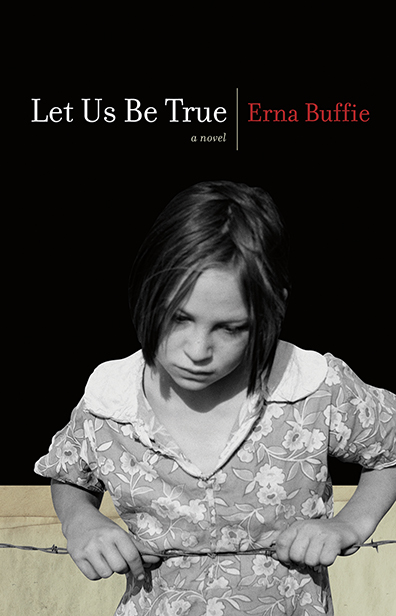 Today, Winnipeg-based writer and film-maker Erna Buffie launches my new series, Mixed Tape (read about it and its sister project, CanLit Collections) with a meditation on the role music played in her debut novel Let Us Be True, and a song-list.

Says Erna: The challenge of creating a mixed tape for Let Us Be True made me realize just how many musical references are in the novel. Maybe the structure – moving back and forth through time and space and between different characters – made music a useful, and strangely second nature device for me.

As a filmmaker I’ve always used music, not just to punctuate and heighten emotion but also to enhance the mise en scene – what my mother would have described as a “high falutin” phrase used to to encompass all of the visual and auditory elements that create a convincing world on screen.

So whether it’s the sound of Winnie’s footsteps timing out the rhythm of Glen Miller’s Moonlight Serenade or the myriad shades of blue conjured by Athena as she listens to Bach’s Six Suites for Cello, it turns out that music is also an essential part of the emotional landscape in Let Us Be True.

Sometimes the songs evoke a particular era and place, other times they suggest a memory or a feeling. In one case, the name of a country song actually inspired the naming of a character. In another, Bach’s music opens a window onto a strange sensory phenomenon called synesthesia, in which some people’s sensory pathways overlap. For some synesthetes, numbers and letters automatically appear coloured while others experience sounds as tactile sensations, and still others, like the character Athena, actually see music as colour.

But here’s the odd thing. While I associated music with almost all of the secondary characters in the book, I realized that I hadn’t linked a single piece of music or song to the book’s central character, Pearl. Nor did I associate music with her husband, Henry. While Pearl’s daughters had Joni Mitchell and Santana, and her sister Winnie, and Henry’s sister Jolene, had Glenn Miller and Kitty Wells, music is decidedly absent from Pearl’s life and the life of her husband.

Why is that?, I found myself wondering.

I suspect the answer lies as much in the mysteries that are Pearl and Henry as in the nature of music itself. Much like Proust’s Madeleines, music can instantly and vividly evoke memory, and for someone like Pearl, a woman burdened by secrets and painful memories, music may have posed too high an emotional risk.

But I did find one song for Pearl that I would definitely include if I were to rewrite the last chapter of the book. It’s an old standard from 1926 called Bye, Bye Blackbird, a song that Pearl and her mother would almost certainly have heard, and the version I’ve included here is sung by one of my favourite contemporary singers, Melody Gardot. While there’s been a lot of speculation about what the song means and who it’s about, the lyrics suggest, to me at least, a woman who has lost or been abandoned by her family and is on her way back home to try and find them again.

Which, at its heart, is what this book is really all about.

For Pearl’s husband, I chose two World War Two love songs: Til Then sung especially for Henry by The Mills Brothers and I’ll Be Seeing You, a song which also speaks to Pearl’s life.

So…I hope you have fun listening to the soundtrack for Let Us Be True. Maybe it will bring back memories, or better still, introduce you to a few tunes you’ve never heard before.

Songs for Pearl and Henry:

‘Till Then – The Mills Brothers

I’ll Be Seeing You – Billie Holiday

Songs for Winnie and Jolene

It Wasn’t God Who Made Honky Tonk Angles – Kitty West

Music for Carol, Darlene and Athena:

For more about Let Us Be True and Erna’s writing process, watch this interview, and f you’d like to be part of her “Fifty Book Clubs Challenge,” you can invite her to your book club to discuss the book in person or over Skype. Just message her on her Facebook author page to make arrangements.