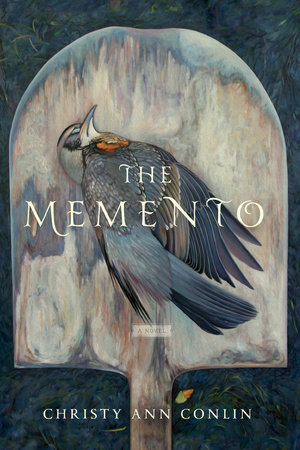 Here, she shares the music and artifacts that helped breathed life into this “coming of age story with elements of ghost stories, haunted houses, family curses and folk tales.”

It’s rare for me to listen to recorded or live music when I am actually writing for I hear it in my mind’s ear, as it were, a soundscape which underscores the fictional world making its way into words. So many scenes in my new novel, The Memento, were written with music already playing in my head.

But I often listen to “real” music when I’m researching or just sitting and staring out the window thinking about the story, the characters, where to take a story next, and I surround myself with objects and images which evoke the world as well.

It’s a way of staying anchored in fiction when day-to-day life with family and children and teaching threatens to engulf. I had my walls covered with photos and antique postcards while writing The Memento because they seem to hold spirits, if you know what I mean.

The Memento is a ghost story and when I peer into an old image, it is like the past is captured there. It was magnificent being surrounded by them.

It’s curious living with a book for so many years, taking this long voyage. A lot of life unfolds in fourteen years, and the book and I navigated each other through the joyous birth of my son, my father’s Alzheimer’s disease, my mother losing her vision, and the many tiny everyday moments of love and loss.

A key aspect of The Memento is what triggers one to reminisce, for it is after all, a novel which explores memory, loss and mercy, with songs and music woven through the book as a part of a musical landscape. I view the songs and images which kept me company as mementos of the writing process. Each one takes me back to that moment of creation.

Edith Piaf is a singer and songwriter I’ve always loved. Love and loss are big themes in The Memento and I would find myself singing La Vie En Rose when I wrote, especially scenes with Pomeline, a minor character who is in the throes of first love. She plays the piano and wanders in a garden singing. I would belt out the song when I walked in the woods, trying to sort out plot points. The song evokes another time and writing my book, I did feel very much like I was in the late 1940s. Then I got to see musician and performer, Ariana Nasar, accompanied by Andy Flinn, do an interpretation of La Vie En Rose, in an Edith Piaf show Ariana has created. This was an unearthly experience, hearing her sing live, after having it in my head for so long. It is like Piaf lives again. And I can see my sweet Pomeline as she strolls into danger…

Nostalgia by Emily Barker and the Red Clay Halo

I read a huge amount of classical literature during the writing but took a strange turn into the writing of Henning Mankell when I was considering plot, primarily his Wallander books. The stories and characters are gritty and compelling but there is an exquisitely beautiful visual element to the writing, where the seaside and city streets of Sweden are drawn almost in pastels, such a sharp juxtaposition to the harshness and heart break of the stories…. This led me to the BBC adaptation starring Kenneth Brannagh and the theme song, Nostalgia, by Emily Barker and the Red Clay Halo. This song makes every day feel so endlessly long and life itself so very brief.

So, when I wasn’t listening to music in my head and writing, or staring into space while listening to music outside my head, I was staring at photographs of shorelines. This is the view from my grandmother’s cottage and while some of my writing was done actually sitting at a card table looking out the window at this very sight, I have also always had this photo on my bulletin board in my writing studio, a memento of one of my earliest childhood views, the Bay of Fundy and the Isle Haute, which is even mentioned in Champlain’s ship log in 1604. This island features in The Memento. Something dreadful and ghostly happens in this beautiful place. 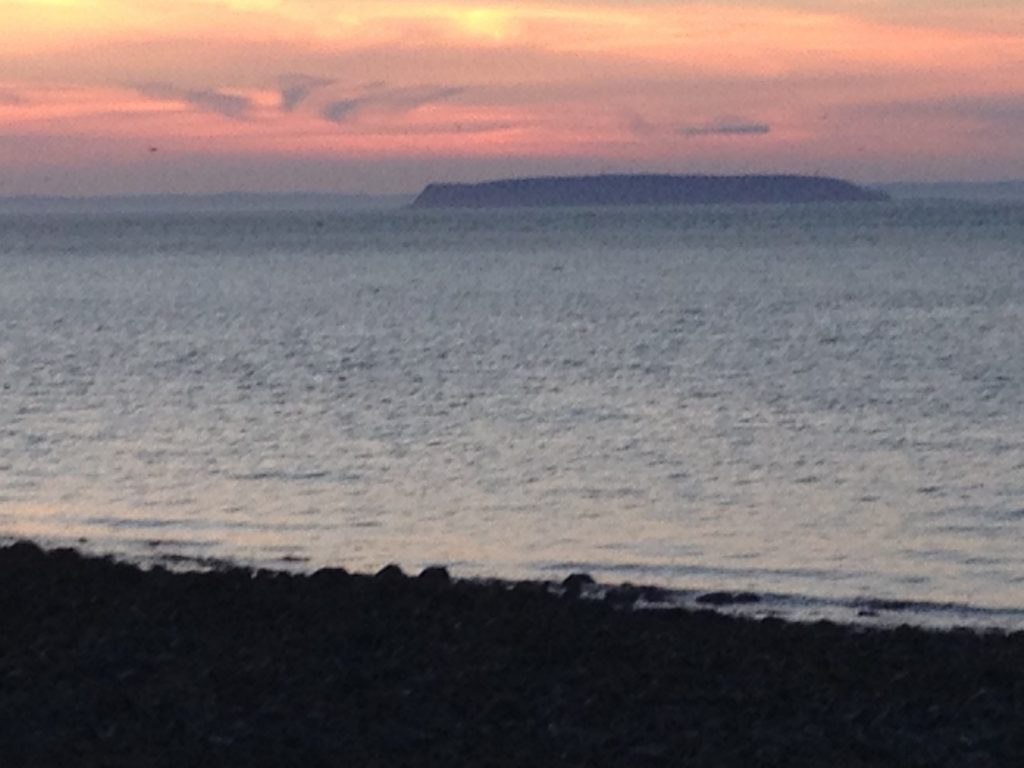 I have an extensive teacup and china collection which started when I was a child. Almost every piece was given to me with an accompanying story. I started wondering about teacups, if they could be, you know, haunted. These are a few of mine, in a classic teacup cupboard beside the table I use for reading and writing. 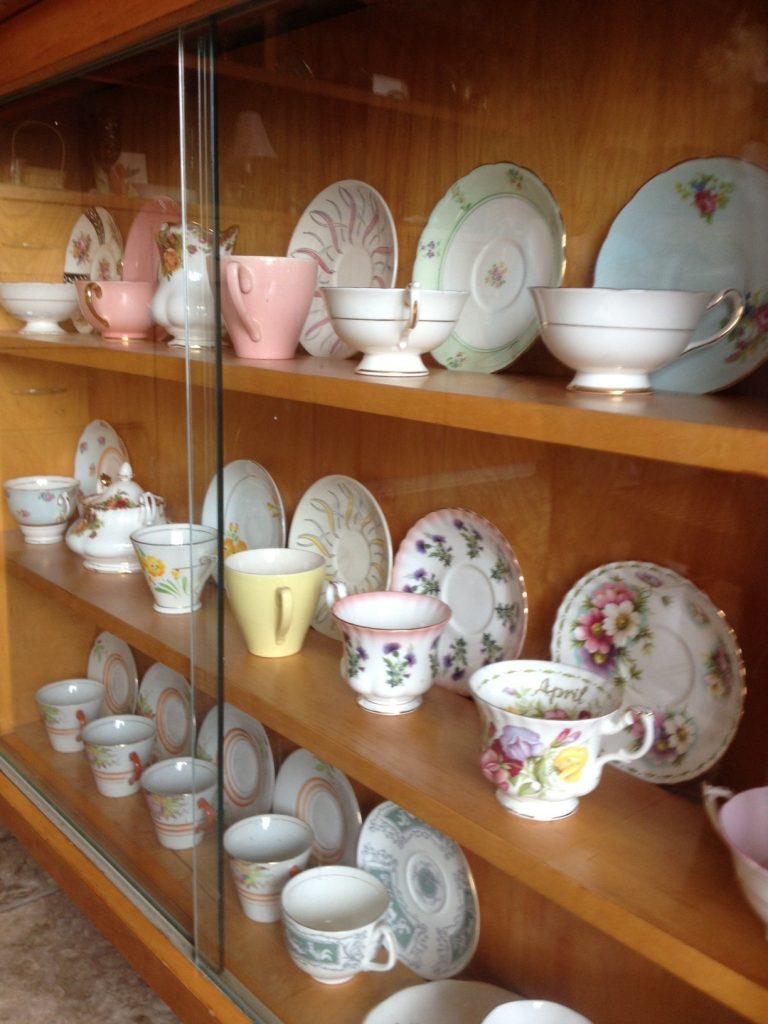 My writing room walls were also covered with many vintage postcards. While my story doesn’t use real place names, it does evoke a sense of hot summer, ocean, fresh water ponds, and lush tangled water and land flowers. This particular postcard is a beguiling memento of another time. This industry is long since gone in the Annapolis Valley, but is a particular unique way of picking flowers which lends itself to the world of my book. I can’t pass a lily pond now without thinking of this postcard, and the people who are long dead. 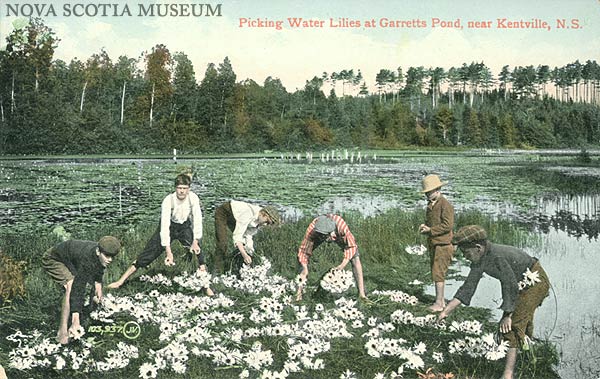 White Coral Bells is a lullaby I have sung to my son for his entire life. He is ten now. It’s a lovely old garden lullaby and perhaps because I sang it every night, it found its way into my novel. This version, done in rounds by Elyse, is sweet, gentle and romantic, yet so evocative in the way of traditional lullabies, coming off the tongues and lips of so many generations of women, handed down from mother to daughter.

White Coral Bells was the one song which spanned the longest amount of time for me during the writing of The Memento. When I made a short art film for a book trailer, in collaboration with my friend, Kimberly Smith, we recorded me singing a spooky version to use as the music, and Kimberly picking out the melody on the keyboard. This short little bit of film feels like an artifact for me, an encapsulation of the sounds and images which define the world of The Memento.

Go here to set this playlist on a loop!