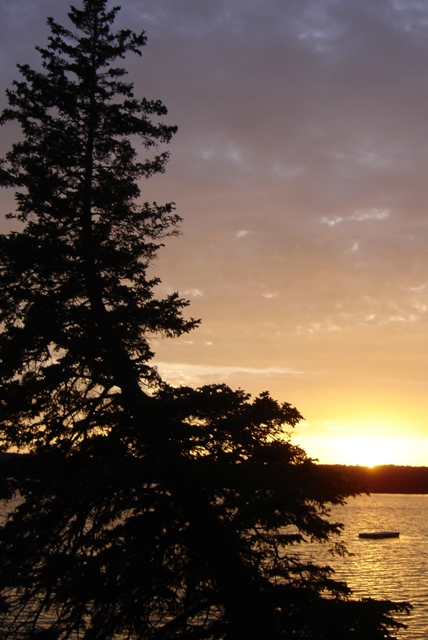 Wow, what a weekend.

This was the one where my brother and sister-in-law drove me out to the kennel to drop off Ollie, Jason came home from class and we drove north for five hours, picked up bug dope and cream for morning coffee at a Giant Tiger in a town smelling of sulpher and crossed over the old wooden single-lane swing bridge (as Jason said, “I’ve never seen pot holes in wood”) to rumble onto the Island, that place of family legend and poetry.

The first night we ate fried fish on the edge of Ice Lake, surrounded by the warm reception of half-second-cousins I’d met only occasionally and sipped Budweiser out of wet bottles and watched the kids become instant friends, playing tag across the large green lawn.

The next day, we gathered at the community hall for my Uncle Clive’s memorial. With his wife, kids, sister (my mom), nieces and nephew (my sister, my brother and I), friends from New Mexico and New York and my great aunt’s kids and once-removed second cousins from Wiarton and Islanders and other family and friends, we read bits and pieces of his writing and told stories about all the antics he’d so often get up to and recited poetry and ate Tim Bits, Scotch mints, smoked fish, butter tarts, potato chips and my Grandmother’s oatmeal cookies (made by me, from her recipe) in his memory. Near the end, I slipped outside and closed my eyes to feel the steady wind running across the wide fields of earth over limestone shale.

Out at Tobacco Lake, where my long-dead grandfather’s initials are carved into a beam into the old camp called Leaning Spruce (so named for the tree pictured above), we piled into three motorboats and two kayaks and traveled across the lake to a place Clive loved.

On shore, my mom picked up his ashes, held in a Japanese paper box, and said “he’s so heavy.” All hail the Chisholm wit: my cousin Caitlin instantly quipped, “he ain’t heavy, he’s your brother.” Single-malt scotch poured on the box and the bottle passed around and our voices singing “When the Saints Go Marching In.”

Back at the cabin, in a half-hour of abandonment and cathartic glee, we sparked up some cigars and waved the setting sun into the darkening pocket of the horizon, an Island tradition he started, fun-loving (and slightly crazy) man that he was. And we said goodbye again, the (first, second) third and final time, to leave him on/in the island he loved, held in the ripple of water, in the long breath of the wind.