Last July, when J. and I were in Toronto, we took Mowat to an off-leash park on a beach in the east end.

Despite the fact that it was about 800 degrees out, there weren’t many people or dogs around, but one woman was hurling a Frisbee into the waves for her docile Golden Retriever.

Never mind fetch. Mowat wanted to play dog, so in his big-chested slightly bullying way, he barreled right up to him and tried to get him going. 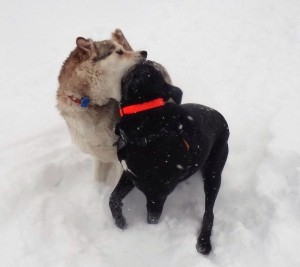 The woman was pleasant. We watched. She threw. The dog swam pointedly away from Mowat, casting a sort-of, who the hell are you? look his way. Clearly, the dog was annoyed.

He wasn’t the only one.

The owner turned to me and said, Your dog hasn’t learned his puppy etiquette.

I smiled thinly, put in my place.

(Well, likely, as evidenced by the following moments, when I found myself panting in pursuit through a park off Queen Street trying to catch up with the black streak that was our little tyke.)

But what I wanted to say to her – and to the woman in a Pet Valu a few days later who gave me a lecture on how there’s no other choice but raw food if you care about your dog – was this: You, big-city-dog-owner, don’t have a freakin’ clue.

Mowat was found huddled, half frozen on somebody’s porch in January at the age of three months.

Out of the dozens of other puppies born up here, over and over and over again, to unspayed females impregnated by roaming, intact males, he was one of the lucky ones. 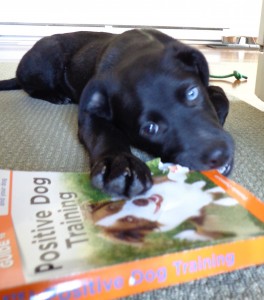 When we took him in, I had my training book, my clicker, my treats. I’d never trained a dog before, but I was willing to learn. It’s not like we had a choice. We couldn’t bring him to a class or hire an experienced trainer. Because there are none up here. Period.

I taught him sit, stay, recall (more or less), leave it, wait for the go-ahead to eat, shake a paw, and a few other basics. But “puppy etiquette”? Who knew?

When those people admonished me, what I felt was the acute difference between a world where you can get whatever you want and one where you have to make do.

Up here, we buy new outfits at Giant Tiger and frozen Brussel Sprouts in the middle of February. But dogs make do as well.

If they’re stray, they survive (or they don’t) begging for scraps outside the IGA at the mall on the reserve or they live in their plywood dog houses, and hopefully get fed, or they’re loved and untrained and tug their buddies roughly around by their neck skin when they play.

Every day pictures are posted to The Pas Lost and Found Dogs and Cats Facebook page of roaming animals, collared and uncollared, who, if they’re picked up by the town, have until Friday before they’re euthanized.

So, you know, it’s not easy. Especially for tender-hearted animal people, of which there are many in this place.

And for challenging dogs like Lila, the rescue J. and I tried to foster.

Her life has been good since moving out of our place, but not perfect.

She’s been housed in a garage, walked four times a day, fed, loved, and has done an incredible job so far of healing, simply from being taken out of a terrible situation, and not hit or kicked or starved for a few months.

But Lila is getting a great opportunity. She is about to head east, into that world where dogs get to go to school and eat like royalty, if they’re lucky.

The Toronto Humane Society is taking her, because they’re the ones who amazingly stepped forward, to offer her rehabilitation and training and a chance at a new existence.

I so hope it means a happy beginning for her, and that she never again has to make do.