Lila: Off her chain and warm but still needing home

J. and I are animal lovers.

Combined we’ve had five dogs, eleven cats, four parakeets, four geckos, two iguanas and a robin with a broken leg that J. spent a summer helping heal before teaching it to catch its own worms and finally, fly off.

Our cat came to us two years ago outside the Thai Plate in Orillia. It was winter and as soon as people parked and shut their engines off she’d creep under their cars for the residual heat. When she crawled under our Acura, I pretty much knew we’d found our next pet.

Four months earlier, we’d lost Oliver, our dog, at thirteen and Griffy, a feral orange tabby with scars from frost-bite and a bite wound on her head, sucked up a lot of love.

Then there’s Mowat, the puppy with one blue eye who was found on the street in The Pas and moved in with us a week after we arrived up north.

And for the past week we’ve had Lila, a foster dog from the local rescue, although we’re beginning to realize that our place isn’t the best fit for her. 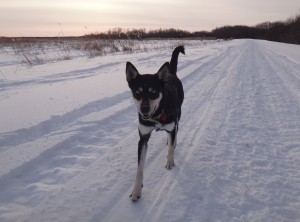 The poor girl has had a rough go.

In December, the wonderful people at the Two Women with a Garage dog rescue took her in when she was voluntarily relinquished.

I’m not totally clear on the story, but from what I understand she’d been put outside in December (the coldest month this winter) with her puppies. Emaciated, she was chained up and struggling to care for her brood.

Here’s a dog who had to fight for herself, in the face of who knows what sort of abuse and adversity.

If you’re a guy, she’ll be scared of you until she can figure out whether you’re a safe bet (which happens quickly if you’re good to her) and, while she’s calm on her own, other animals seem to represent competition for her, which is pretty tough as we’ve got two of them.

On a morning when Lila and Mowat were not getting along and I was at my wit’s end, I got some fantastic advice from Kathy Kawalec.

That turned on my inner light bulb.

I could totally see her, jerking around on the end of that damn chain, even though she’s in my kitchen.

I mean, can you imagine?

I picture these sorts of circumstances so intensely because it’s my job to crawl inside the heads and emotions of other creatures and empathize.

My friend, the writer Diana Davidson, reminded me of this when I was at a low point and I’m really glad she did.

While this outlook can definitely help with building a relationship with a dog, it’s also limiting because it’s blocked me for several days from seeing clearly that Lila’s not at her best with us.

Even watching me feed the cat her bowl of salmon soft food (which we’ve stupidly been doing to try to establish Griffy’s seniority in the house so that, given the chance, Lila won’t chase her) sets her barking.

And you can imagine how the cat feels.

Well, no need to: yesterday she peed on our bed.

The rescue is looking for a new place for her now where she can’t build dramas with other animals and once she gets there, I think that some of that darkness I picture so clearly in her past will simply fade away in warm light.

That’s my hope anyway, because it’s very hard to try so hard and love and still lose: a truth known by any abandoned dog.

P.S. Thank you to all of you who completed my survey! I’ll be compiling the results over the next few days. If you haven’t done the quick ten questions to give me feedback on this blog, there’s still time, and I’d really appreciate it! Go here. And thanks!