I’ve had a lot of wonderful conversations with writers over the past couple of weeks. Good conversations, and sometimes sad ones.

Some of the writers I’ve spoken with – maybe even you – have been struggling with projects for several years (even decades) and/or trying – and often failing – to find time to work on the story that’s been haunting them.

Many have written drafts of novels, short stories, essays, poetry collections, but can’t seem to push aside the heavy weight of resistance to re-enter the work for revision.

One person told me that a publisher was really interested in a novel she’d poured her heart and soul into but when he asked her to make changes, she froze, unsure how to proceed. Her hesitation turned into weeks turned into months turned into years.

I could hear the pain in her voice.

Quarantine, The Second Self, The Story of Her Life.

These are the titles of three novels that I wrote drafts of, then abandoned (and, of course, there are others).

Finishing (as in, learning how to) was pretty much the main reason I went to graduate school to get my MFA.

The academic structure – and signing up to complete a novel for my thesis – gave me the kick in the pants to focus, to get down to brass tacks (which is, not for nothing, the name of the bar-and-grill-turned-soup-kitchen in the Dark Zone, in Swarm, by the way).

I had to figure out how to face my oh-so-chaotic-and-confusing first draft, not to mention my anxiety, and Just. Keep. Going.

And I did it, grinding through to eventually defend a diminutive version of my novel to a panel of English professors, and earning my MFA.

But then came the summer after grad school.

After a winter and spring spent back in my regular life, teaching essay writing to college students, and forcing myself (or, often, not) to my desk to try to get Swarm to the next stage, good enough to submit to agents.

It was so hard.

I very nearly gave up, and I remember the sheer terror of those days, the feeling that I was standing on the edge of a big choice, and that I might actually do it again: let the novel lapse, fail once more at finishing.

And you know what?

I decided I was done with all that.

Backed into a tight corner, the only way out was to fight.

To make a new opening, to figure out how to move forward. And I don’t mean just doing the work and (somehow) holding my lonely writer self accountable to get to the desk. I mean, I had to figure out some things.

Like: how to face the book I’d made when I was terrified to read what I’d written, how to manage anxiety, how to be kinder to myself, how to move past ‘tinkering’ into solid, meaningful revision, how to accept imperfection and take big, scary risks. 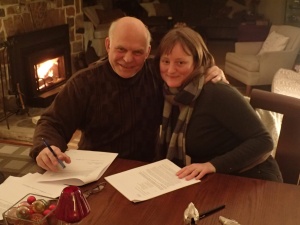 My late step-father witnessing my signature on the contract for Swarm.

So I started to do that. To learn, I mean. Through study, e-classes with mentors, training to be a creativity coach.

And I’ve been drawing on these skills and understandings since: through the completion of, well, Swarm, and then of a poetry collection that took me ten years, on and off, to write (forthcoming from Turnstone Press in 2019).

They’ve also helped me through a really tough novel completion and revision and revision (again) in the months after my brother died which is now out on submission through my agent, and through short stories I’ve revised, polished, submitted (one selected by John Metcalf to be in Oberon Press’s annual Best Canadian Short Stories after it won the Prairie Fire fiction prize).

And in my work as a coach, I’m lucky enough to be helping people bust through their limitations and move deeply into their own work, but I’d like to do more.

I’d like to narrow in on something it seems that a lot of people can use, people like me in my earlier career and like that woman who abandoned her book, whose heart still seems to be broken…

So I’ve started creating an online course focused on moving forward and finishing and over the next little while, I’ll share more about the content but right now I can tell you that it’ll be a six-week long, live workshop (held through easy-to-use video conferencing) which will start in the new year, on Sunday afternoons, at a time that works wherever you are on the continent.

It’ll also be a pilot course, meaning, basically, the first draft version, so I’ll be offering it at a much lower cost than what I’ll be charging for the final version, in exchange for lots of feedback so that I can make it something really good and meaningful!

I’m capping the class at just 10 participants, so we can talk easily and contribute to each other’s success, and if you want in right now, please hit reply on this email and shoot me a note.

In case you’re wondering what kind of a teacher I am, here are a couple of nice things that have been said about me:

“Lauren provided excellent instruction, guided exercises, and a trusting positive environment in which to explore and grow as a writer. – J. Lore

“Very insightful advice and observations with practical writing exercises that will be very helpful in my own writing.” – Carmen Siegers

If you’re done with all that as well, and want to move past being stalled, not knowing how to proceed, letting fear stop you from finishing, and writing drafts that are lost to the passage of time, join me! I promise I will help you find a clearer path into your future as a writer.

P.S. If you’re in the Winnipeg area, I’ll be offering some similar content in a workshop called After NaNoWriMo: What Now?! on December 10th at the Manitoba Writers’ Guild classroom. Also capped at 10. Go here to sign up.