Learning the Land of Water

Last night I went to a book event in the cafeteria at UCN (the University College of the North). There weren’t a lot of people there – which didn’t really surprise me, as I remember doing the northern Ontario tour for Lichen Bright and sometimes we’d have, oh, about five people out for readings. 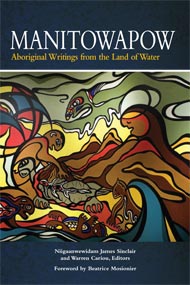 I’m so glad I went. The book is called Manitowapow: Aboriginal Writings from the Land of Water and it’s a compilation of writings – essays, poetry, manifestoes, speeches, stories – from native writers born in years ranging from 1774 to 1993 who call (and have called) this province, this watery place, home. Both of the editors were up from Winnipeg – Niigaan James Sinclair and Warren Cariou – and they each read a section from the book and talked about its impetus, what drove it, how it came to be… (to crudely summarize).

What struck me most, though, was the clear sensation I had of entering into another culture. This is the place where we live now, I thought many times.

I thought that when the evening began with an elder who gave a prayer in Cree (the first time I’ve heard the language) and when it ended with a young man named Kevin, a student at UCN, playing his fiddle and spontaneously telling stories about growing up on reserve in a house with one bedroom for his five family members, no running water or toilet, and black mould in the walls. He moved from heavy emotion to sparkling humour and, in between, made beautiful music.

I thought too of where we come from. How last fall, J. and I went to Niagara-On-the-Lake. We wandered the perimeter of Fort George and looked over the river at Fort Niagara on the American side. I wondered if my ancestors – who had lived just west of there, near St. Catharines, before moving north in the early 1850s – ever visited that town which, of course, was all dressed up this past year for the 100th anniversary of the War of 1812.

That year, of course, meant something different over here.

I saw the date when I flipped open Manitowapow last night. It was at the beginning of the “Open Letter to the Queen’s Representative,” written by Chief Peguis (1774-1864): “Many winters ago (in 1812) the lands along the Red River, in the Assiniboine Country, on which I, and the tribe of Indians of whom I am Chief, then lived, were taken possession of, without permission of myself or my tribe, by a body of white settlers.”

This is the beginning of a story I have never heard. And I’m excited to start to learn.