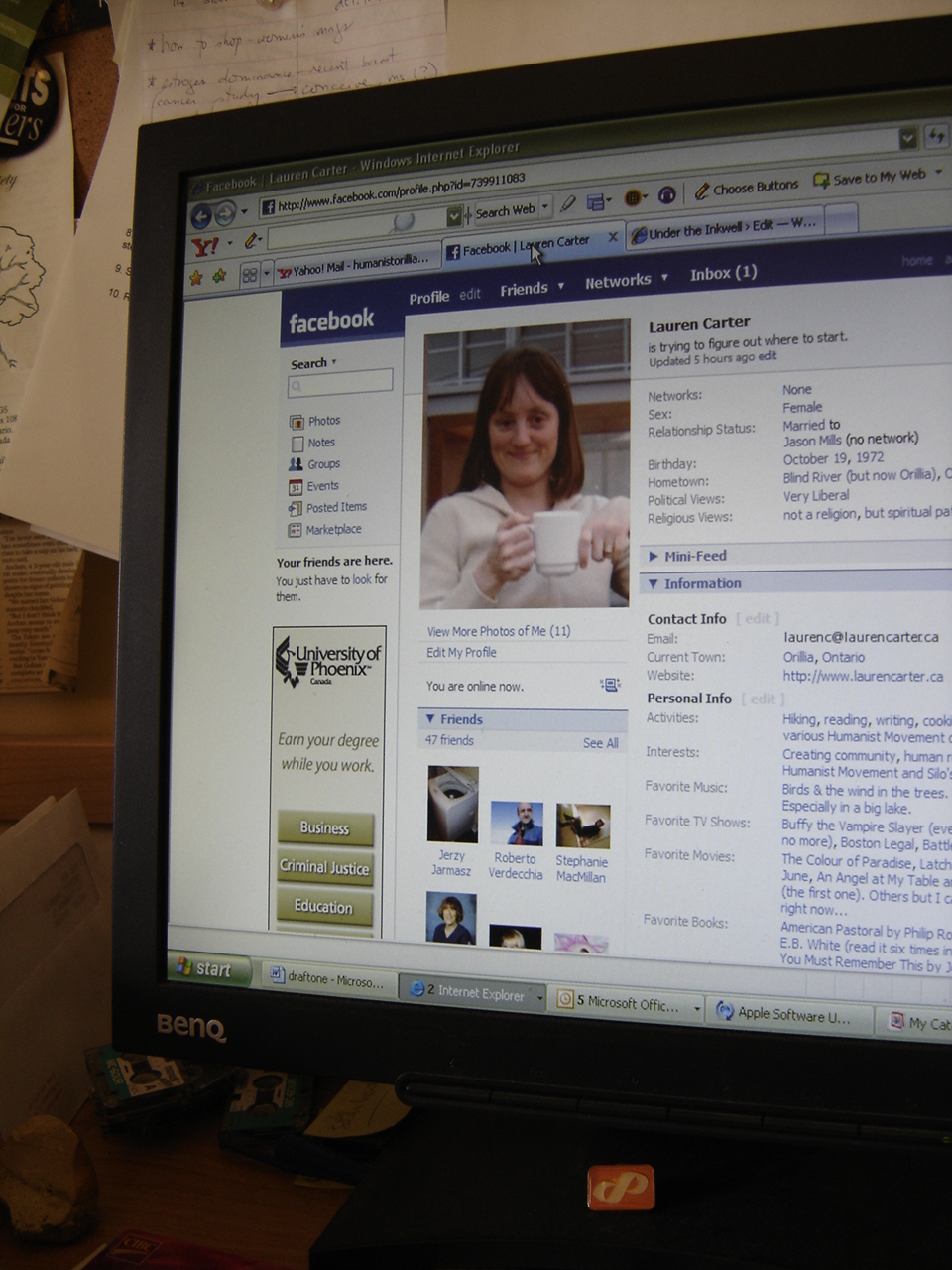 finally updating her blog! Lauren is excited. Lauren is giving her dog a cookie. Lauren is out in the garden, going to bed, packing, off on an adventure, back to work. Lauren is procrastinating.

For many of you the above claims might make no sense at all. But if you’ve been bitten by the Facebook bug, they’re probably ringing a few bells.

And, holy cow, no sooner did I become a Facebook addict than the world started talking about it. Or so it seemed. Although, sure, it is unlikely that people struggling somewhere to stay in their mud homes in the face of an ever-more-oppressive government are all that tuned in to Facebook and the recent controversy it has spawned.

But in my little North American universe, Lauren is hip!

Hip because, while I am part of the .1 percent of the population of Facebook users born in the 1970s and was actually begrudgingly introduced to it by my sister-in-law who was born in the 1980s, I am still part of it! On Mother’s Day, much to my mother’s annoyance, my sister (born in the 1960s!) and I spent a good chunk of time discussing our Facebooks. My husband napped. He’s talked about a group he wants to start: people who have lost their partners to Facebook.

Seriously, Lauren has is having a problem. Her sister is, too.

The pressing difficulty for me is not so much stumbling across bitchy comments by teenie-boppers in group forums, an issue that has hit the news big-time over the past little while and which I’ll get to later. The issue, for me, runs a bit deeper. It goes like this:

Lauren is her own boss. Lauren is not going to make any money if she is on her Facebook every ten seconds changing her status and uploading new pictures and cruising around to see what all her friends are doing like some manic partier who can’t sit still. Like all classic addicts, Lauren is out of control.

And what a strange thing this is. Sometimes, late at night, as I’m lying in bed thinking of clever things to write on people’s walls, I will wonder if anyone actually cares that I am going to bed, eating breakfast, bringing my dog out for a walk, taking a shower, contemplating ladybugs. But still the compulsion is too much. I must keep everyone in the know.

Because I, like everyone else, want to be part of something. And despite the fact that I just came back from a worldwide gathering of 6,000 people talking about reconciliation with their pasts and building meaning in their lives, despite the fact that I really am part of a deep, meaningful movement that is making a true impact in the world, I still feel a thrill when I update my status.

How weird is that?

For me, it emphasizes how different it is for teenagers these days. The 99.9 percent of Facebook users who were born after the 70s have more or less grown up in this other world of online communities.

And how funny it is that the answer that adults have for kids saying mean things online is to try and ban the medium.

As we all know, say it with me, the medium isn’t… Yeah, yeah.

The simple truth is this: as technology races ever faster, the world changes more and more. We hit 30 and start shaking our heads at the teenagers around us (a fact that reinforced how hip I felt to be doing something so youngsterish!)

But a different – and, yeah, worse – world doesn’t automatically equal apocalypse. What is scary right now, with teenagers spending more time in Second Life than the real world and using Facebook to bully and be mean, are actually the same things that have always been scary: violence and meaninglessness and isolation. We need to find an answer for these things, not the way they might be expressed.

Lauren is done. She is going to check on her friends.