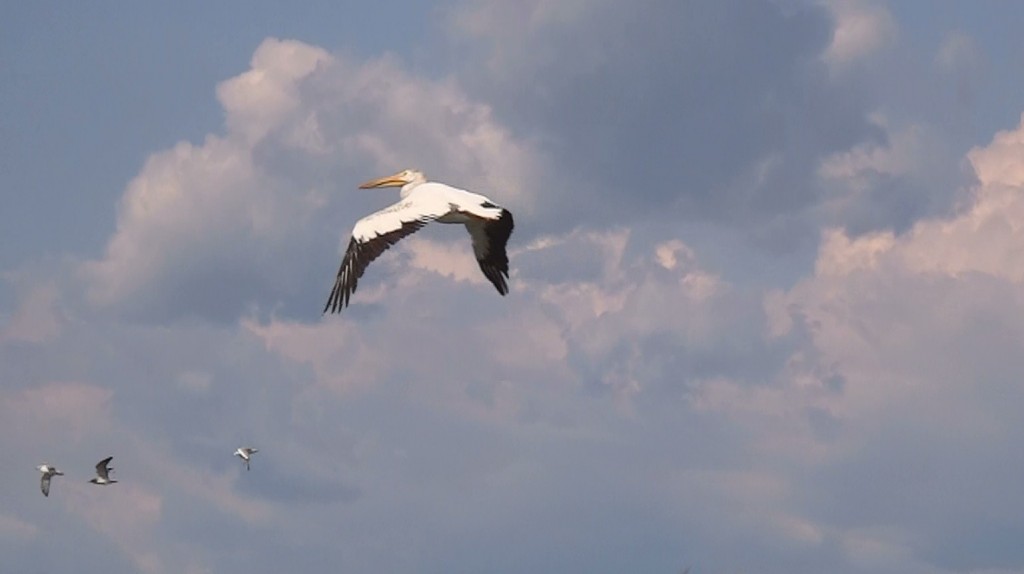 Yesterday was the official launch day of my book. It felt incredibly anti-climactic. Not a whole lot new happened, other than my awareness that the book could now be easily ordered – rather than pre-ordered – online or even outright purchased in the bookstores that carry it.

But mostly I spent the day typing out the handwritten chapters of my new novel, in preparation for putting together my Canada Council grant application (due October 1st). I need to complete it before I climb on a plane up here in The Pas and head south to Winnipeg for Thin Air and parts east for my Ontario tour.

Oh, and I noticed that the pelicans might be gone.

A huge flock, over a hundred of them, have summered on the lake behind our house. J. and I discovered them on a canoe outing in early August and since then they’ve integrated into our daily routine, like neighbours.

In the morning we often see them gliding lazily over our house, like vacationers out for a stroll. They congregate at a muddy point on an island in the river where they spend hours as if at the beach.

But yesterday, we only saw a few and instead of drifting they were flapping their wings hard. J. and I talked about how it looked. Like, time’s up, time to hit rush hour and get back to the grind.

And by grind I mean their grueling 4,000 kilometre migration to the Gulf Coast wetlands in Florida, Alabama, Louisiana and Texas where they’ll spend the cold months.

I’ll miss them. Not only does their absence mean winter’s around the corner but they are simply extraordinary creatures.

They are huge, with wing spans of up to nine feet. But despite their size, they are so, so quiet and carry themselves with almost otherworldy grace.

Even when we nudged our canoe into the crowd of them this summer, they barely made a sound as they massed together, lifted off the water and rose assuredly into the sky.