Landscape of Anxiety: How (and why) I created a fictional setting for my novel 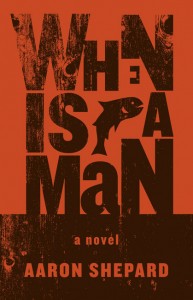 The following is a guest post by writer Aaron Shepard.

Being a country-born lad, the odds are good I’ll never write a “New York” novel. Even a Toronto or Vancouver novel might be a stretch.

Instead, I wrote a “West Kootenay” novel, even though I’ve been warned about the perils of doing so. Never heard of the West Kootenay? That would be one of the perils.

When is a Man is set in the Immitoin Valley, which is entirely fictional – the towns, the rivers and streams, the whole works. But why bother inventing my setting when hardly anyone east of Lethbridge has heard of the West Kootenay? 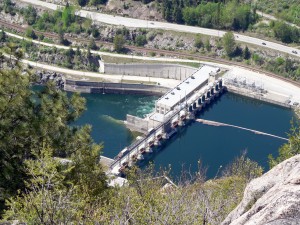 Brilliant Dam, near Castlegar (near the Arrow Lakes)

Part of my novel concerns the relocation of a few thousand citizens in the 1960s to make way for a massive hydroelectric dam reservoir. It was inspired by the history of the nearby, very real Arrow Lakes, which Anne DeGrace wrote about in the excellent Treading Water. Not only was I hesitant to cover similar ground, but if I wrote strictly about the Arrow Lakes, I knew I would feel obligated to stick to the facts. And that would have prevented me from telling the story I wanted to tell.

Writers don’t, and shouldn’t, feel compelled to conform to historical fact (or any facts, for that matter). What I wanted was a combination of places, a grab-bag of histories and landscapes, to chase after certain ideas.I’ve also been told chasing “ideas” are a sin for fiction writers, but that’s a story for another time.

The whole process of creating a fictional setting started out as more or less instinctive. Now, with the luxury of looking back, I see it as an equation:

And, like all equations (as I finally learned, after being repeatedly traumatized by algebra throughout high school), we have to define x and y:

Anxiety = the awareness of the icky past, the uncomfortable present and the uncertain future (which the main character or narrative voice usually imagines as a worse version of the icky past).

Of course, “personal + political places” doesn’t imply these two things harmoniously add up. As a small example, take Beacon Hill Park, which I walk through every morning on my way to work. There are forests, ponds and birds – the nesting herons in the spring, the arrival of hooded mergansers in November – and I can breathe some fresh air before confining myself to my office cubicle for several hours.

But on those same morning walks, I also witness homeless people sleeping in the park. They shiver through the cold winter rain, they stagger out of their tents (if they’re lucky enough to have tents) or their damp sleeping bags, coughing their deep, racking coughs. Occasionally the number of homeless reaches a tipping point, and the cops swoop in. Every day the park reminds me not only of the resiliency of nature, but of the imbalances within our society. My place of respite from the daily rat race is also a political place, reflecting socioeconomic realities.

To me, that is the essence of creating a fictional setting: you bring together bits and pieces of the real places you value and then you pit them against the hazards of the present, and endanger them with the future. You celebrate and commemorate the places in your life, and then harass them with politics and the ravages of time.

This paradox, when writing, is helpful: it keeps the setting from drifting backwards into nostalgia and sentimentality. The idyllic scene is disturbed by the unrelenting forward movement of progress and economics – the dream bubble bursting against the sociopolitical sphere.

Meanwhile, as the fictional landscape quietly writhes with its inherent tensions (some intentionally authored, some not), the main character has already set up shop, centre stage, and is unpacking his baggage.

Anxiety transforms a place: it is more powerful than the political. The main character does not need to build a dam, say, to influence the setting. He merely spreads his belongings – or, rather, his problems – all over the place. Under the protagonist’s troubled gaze, the landscape is elusive, not entirely benign.

In When is a Man, Paul’s anxiety is for himself: his self-loathing, his impotence and incontinence, his failed career.

But the Immitoin Valley also reflects my own anxieties: it is a composite of rivers and valleys around the world that have been, or will be, dammed, flooded or otherwise altered; it is also a fond tip of the hat to my favourite rivers, towns, forests and ski trails. I wrote with a wary eye toward the future, toward things like the proposed Site C dam and Muskrat Falls, toward oil and the economy, and let those thoughts disturb each idyllic scene. 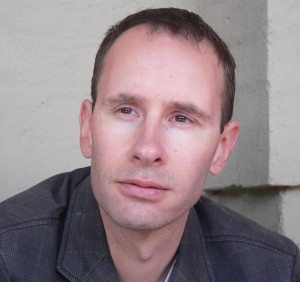 Aaron Shepard has written award-winning short fiction and has been published in a number of Canadian literary journals, including the Fiddlehead and PRISM International. His personal essay “Edge of the Herd” appears in the anthology Nobody’s Father: Life Without Kids. He is a graduate of the University of Victoria’s MFA in Creative Writing program, and has served on the Malahat Review’s fiction board. An avid outdoorsman, Aaron enjoys hiking, camping, birdwatching, and cross-country skiing in his spare time. When is a Man is his debut novel. Visit Aaron online at aaronshepard.ca and follow him on Twitter at @AaronWhen.
Are you published writer interested in writing about an aspect of writing, fiction, poetry, books, or reading culture that intrigues and interests you? Contact me!