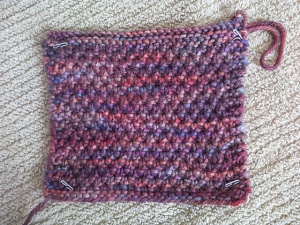 That’s what I bought myself for Christmas last year, with a gift certificate my sister gave me.

As any knitter knows, seven skeins is a lot of yarn.

It’s a sweater amount, which is what I wanted.

I’ve made several tops and sweaters since learning how to knit, miniature ones for babies, toddlers and kids, and a few for myself, so it isn’t like I don’t think I can figure it out.

But this is big.

This project has stakes.

The yarn is gorgeous; it cost enough to feed J. and I for a week.

So there’s the question, haunting me: what if I screw it up?

Twice now, I’ve knit lengthy sections, then reached tricky parts, determined I couldn’t do it, and ripped the whole thing out (an effort itself, which took hours). Once I frogged an entire completed body, hem to collar, that had only the sleeves left to finish.

The yarn now sits, unraveled and rewound, a bit fuzzy and probably stretched from so much handling, patiently waiting to be whatever it will become.

My novel’s sort-of in the same shape (the current, in-process one, that is). This week I’ve been poking away at it, thinking about fear and risk and how writing deeply, revising deeply, takes being willing to walk right into the first and take a clear stab at the latter.

My protagonist, I realize, has had it safe.

She’s been sitting around a lot and thinking (deadly! Michael Winter‘s words from my MFA fiction workshop echo in my mind: have them do anything, stick them in a canoe with someone else, just don’t put them at a kitchen table with a cup of tea!)

Well, Lily’s been drinking coffee, staring out at the lake, cocooned in her perceptions of the world, untested, without much strain. She’s there for a reason, but it’s a general reason, without a lot of obvious, immediate risk.

If she were a knitter, it would have all been so easy, a complicated sweater cast on, completed in a chapter.

This came as a surprise, I don’t mind telling you.

Because I know better.

I know how in fiction we don’t do ourselves any favours by making things easy for our characters – not for the story or for own awareness of what that story can become.

Just like we don’t really know ourselves or our loved ones until our mettle is tested – through grief, death, the misfortunes that life sometimes seems more than ready to drop on our heads – we don’t know our characters until they face a few challenges.

Hardship clarifies them, so pushing them into situations that are tough is critical. It gets them up and moving around, showing themselves.

I know all this. So why have I avoided it? Why do others? Why do we opt for safety? Why do we carry such fear?

Is it failure? The deep worry of that?

That’s what’s paralyzing me, I realize, with this expensive yarn: the concern that I’ll waste it, that I’ll ruin it. Thus, I’m wasting it. I’m slowly ruining it.

You know what I’ve decided to do?

Pick an easy project I can tackle right now. Set that goal.

Enjoy myself. Have fun. Be a rebel and not even swatch (I can hear the knitters gasping).

Remember how it was when I started (after the tricky bit of learning technique): the pleasure of moving my hands towards making something, working in rhythm, even while I was riddling a piece with holes from accidental yarn-overs, my wrists quickly growing tired.

I knew back then that I’d get better not from rigidity and self-scolding and constantly stopping and starting but through daily practice, deep focus, feeling the squishy soft yarn in my hands, moving my hands.

The same is true with writing.

Yesterday, I wrote a new scene which my gut was pulling me towards. I knew it was there; I could see it on the horizon. My mind was saying: No! You can’t do that! You’ll have to reorganize a bunch of the plot!

But it enticed me.

The phosphorus light of a full moon. A stranger’s face. The gleaming whites of her eyes. A confrontation as if in a dream.

F- it, I thought. I can always change it later.

Fluid and alive, like yarn flying off the needles.

“We have come to think that duty should come first,” writes Brenda Ueland, in her book If You Want To Write

, originally published in 1938 (and charmingly containing a chapter titled, Why Women who do too much housework should neglect it for their writing, to which I heartily concur).

“I disagree,” she says. “Writing, the creative effort, the use of the imagination, should come first.”

I’ve been shifting from duty (I must knit this complicated sweater to make the best use of this yarn, I must write scenes that will knit cleanly and without risk into the whole) and into just this: the pull of imagination.

Move this chapter over here? Is that what my gut says?

Try it; see what happens.

Maybe I’ll change my mind, maybe it’ll be the thing that helps the story’s new lean towards a clarifying gravity.

Something we face every day, something that simply means more to us when it involves something we care a lot about.

What if, then, we invested in the caring part of this equation rather than the fear, the anxiety, the sense of should?

“Failure is a hard word for people to take,” writes Natalie Goldberg in Wild Mind

. “Use the word kindness then instead. Let yourself be kind. And this kindness comes from an understanding of what it is to be a human being. Have compassion for yourself when you write. There is no failure – just a big field to wander in.”

I’m going to sit myself down in that field for awhile.

Maybe log off the Internet and read a book.

And write, of course, tugged by the promise of exploration, of potential discovery, or at least of crafting a single sentence that isn’t so bad.

Hopefully, I’ll see you there.

Looking to move beyond fear of failure and into self-forgiveness? Sign up for the free trial of my online course, Nine Simple Steps to a Solid Writing Practice.