Jennifer Manuel: Out of a Jar (on Writing with Honesty) 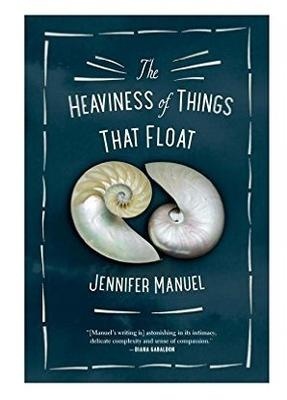 I’ve been on a reading blitz lately about residential schools. I’ve read a couple novels that address this atrocious time in Canadian history, and I’m deep into volume one of the final report of the Truth and Reconciliation Commission of Canada, a text that every Canadian should read, and which many will read, thanks to Jen Manuel’s TRC Reading Pledge.

Jen Manuel is a writer, and her debut novel is bobbing up to the top of my list right now. In The Heaviness of Things that Float (that title!), Jen, says her publisher, “skilfully depicts the lonely world of Bernadette, a woman who has spent the last forty years living alone on the periphery of a remote West Coast First Nations reserve, serving as a nurse for the community. This is a place where truth and myth are deeply intertwined and stories are ‘like organisms all their own, life upon life, the way moss grows around poplar trunks and barnacles atop crab shells, the way golden chanterelles spring from hemlock needles….'”

Today, we get to hear from Jen, about the process of figuring out what she really wanted to say and writing beyond barriers…

“It’s like you’re still keeping her in a jar.”

This was what my editor said to me one day as we worked through the revisions for my debut novel, The Heaviness of Things That Float. She was referring to my main character, Bernadette Perkal, and how seldom her emotions made their way onto the page, how infrequently Bernadette reacted to others, how underdeveloped her thoughts appeared. In other words, it was often not clear what she felt, what she understood, how she interpreted the small world she inhabited. I was frustrated because it was not merely a matter of my inexperience. There was something else going on inside me that wouldn’t allow me to open the jar.

To give you some background, Bernadette is the nurse in a small First Nations community on a remote northwest corner of Vancouver Island. She is non-Indigenous but because she has been in the community for forty years she believes she fully belongs.

Then my editor asked me two questions that blew the lid clear off.

First she asked, “How do you feel about Bernadette?”

I couldn’t answer her. I didn’t know. How often do we pause our writing to reflect on how we personally feel about our characters? Sure, we have intuitive connections to them and we are the architects of their outward traits and inner landscapes, but what can we learn by taking a step back and examining deeply our most private opinions about the characters we create?

Later that day, I realized I had little regard for Bernadette Perkal. This shocked me. I had no idea I felt this way, though the reason was circularly simple: she was not emotionally engaged with the world around her and I found this shallow, evasive, disingenuous.

This of course meant I was not emotionally engaged–that I was, to some degree, writing without depth, evasively, disingenuously, and I immediately knew the reason for this, too.

This was the second question my editor asked me that day.

“What are you really wanting to say in this novel, Jen?”

Generally I knew I wanted to say that no matter how many years a non-First Nations person lives in a First Nations community, can she truly and fully belong? Is mere affinity enough to bestow belonging? Is knowledge of stories and customs enough? Can a person–and here was the crux of the thing for me–truly belong when she holds a completely different set of choices and advantages than the rest of the community?

To answer the question in more depth, however, I sat down later that day and wrote (in a rapid, almost freewriting mode) a letter to somebody I knew. I would not send the letter, but selecting an appropriate person to receive the letter focused my efforts. In it, I answered the question, “Why am I telling you this story?” And every answer was met by relentless follow-up question, “So what?

So what? So what?” until I could plumb no deeper, and soon my exploration had not only answered the second question, but the first as well, and it did so in a way that pushed the novel in a fresher, more honest way while allowing me to make Bernadette a much more intimately revealed character. A character who is hopefully not ever seen as a puppet to deliver any predetermined message (which became less predetermined as my exploration went on), but rather a character who I treated seriously and compassionately as an individual with her own particular set of problems and perspectives on the world.

Bernadette is not an autobiographical character, except in one significant way: Bernadette’s fears and struggles as she navigates relationships harmed by the legacy of colonialism have been my own during my years of living in similar remote places, and by exploring them honestly, the novel became something deeply personal as all novels should. When I look at the novel now, there is evidence here and there that I still wrote with some trepidation, couching some of the drama with explanation to ensure nervously that my intent was not misunderstood.

Even so, I know in the end I wrote with more than mere concern, thanks to the process my editor’s two questions put me through. As we writers attempt to make great art, I am reminded of John Gardner: “For great art, even concern is not enough. Great art celebrates life’s potential, offering a vision unmistakably and unsentimentally rooted in love.”