Island Clearances: Behind the Poem

Last spring, I had the great privilege of being mentored by the poet Jan Zwicky at the Sage Hill Writing Experience, along with seven other extraordinary writers.

For those two weeks, I sifted through a manuscript-in-process about my great-great-grandparents’ 19th-century migration from present-day St. Catharines, up the Niagara escarpment, to Manitoulin Island. Along the way, they set up homesteads that inevitably fell to fire or my great-great-grandfather’s seeming lust for ever-northward movement. 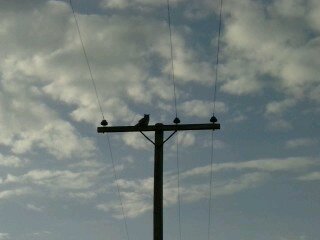 An owl at Sage Hill

I also wrote new poems, and one of them, Island Clearances, won first prize for poetry yesterday in the ROOM 2014 Writing Contests.

A few people have asked me about it and although it won’t appear until the Summer 2015 issue of ROOM, and after that in my new collection, called Migration (pending a publication agreement), I thought I’d write a little bit about how it emerged.

At Sage Hill, one evening, we pulled ourselves away from the hawks hovering over the Qu’Appelle Valley and the wine and the working fireplace and went into Regina to hear Jan read, along with poet Bruce Rice.

She read from Robinson’s Crossing; in particular, the title poem which recounts her own growing understanding that the land her parents and ancestors rooted into was once home to other people. In it, she writes about looking at an old family photograph of a wagon being loaded “at the Narrows / on the trail through Lac Ste. Anne”…

“But what draws the eye, almost

a double-take, are the tipis

in the distance, three of them,

white, smudged – a view the lens

could not pull into focus.”

So, this is, of course, important.

Simply put: it isn’t possible to write about the settlement of previously-occupied land without delving into the reality of the people who first owned (for lack of a better word) the land.

In looking back at my ancestral past, which leads directly to the story, my story, of Manitoulin Island, of my love for the place, of the family legends that have sprouted out of that thin soil, I realized I had to take a good look at this, at the history that had fertilized those roots.

I had already written one poem about the Anishnaabe being pushed up the Bruce Peninsula – all, you understand, through the experience of the “main character,” my great-great-grandmother, Margaret – but I went back to our retreat that night realizing I needed to know the clear facts, the exact dates, the direct causality of native land being signed over and my ancestors then arriving. 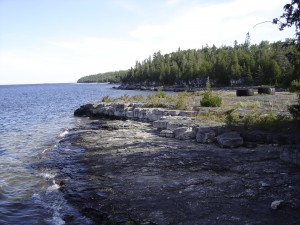 What I found shocked me.

I suppose it shouldn’t have, but it did.

A bit of background, to begin: in 1836, when the Treaty of Manitowaning surrendered 1,500,000 acres from the Objiway to the British, Manitoulin Island was set aside as a refuge for native people.

This treaty, first off, opened the way for Margaret and her husband, John, to move up the Lake Huron coast and help start a settlement just south of Port Elgin.

That same year, in the fall, discussions about Island ‘ownership’ were reopened.

Author Shelley Pearen has written about these negotiations in her praised book Four Voices: The Great Manitoulin Island Treaty of 1862.

She cites Manitowaning Chief Sasso Itawashkash, speaking on behalf of the Anishnaabe, in response to chief superintendent of Indian Affairs William McDougall’s request for their island: “This is my thought: I hold onto my land, I do not cede it. What I said last autumn when they came to make me this request is still my thought and my word today. Always, I too, I want to keep my land for my children, the little land that I still possess…”

A couple days later, after removing the Wikwemikong Peninsula from the negotiations (an area that remains unceded) McDougall “persuaded 17 chiefs and leading men of Manitoulin to surrender the island. McDougall’s persuasion included promises, warning, threats and possibly liquor,” writes Pearen.

In 1863, when the surveyors arrived to take stock of the Island, a group of Anishnaabe gathered to try to stop them but were unsuccessful.

Five short years later, my great-great-grandparents arrived at the island fishing station of Walker’s Point, between present-day South Baymouth and the still-to-be-established logging community of Michael’s Bay, where my great-great-grandfather eventually became a lighthouse keeper and, together with his wife, raised his children, some of whom have descendents on the island to this day.

So the poem, Island Clearances, is about this: this history, the intersections that exist between occupiers and occupied, the impact on the land after the white settlers came, the resonating vibration of long ago history on my perception of a place I deeply love but only know because my ancestors arrived in the wake of that overthrown resistance.

My great-great-grandfather’s own lineage (and, well, I guess mine) sprouted from the Scottish Highlands, his grandfather (my great-great-great-great) having come to Canada after being cleared from his farm to make way for the landowner’s sheep, so I wondered about the thoughts that must have run through his mind, as he lay claim to land, and fish, and trees, that weren’t, by blood, really his.

These are deep questions, and important ones, and the poem gave me the place to ask them.

Not to answer them, mind you, because that is not the role of poetry, but to consider the echoes of my great-great-grandparents’ footfalls, sounding even still.

The epigraph I chose, the first line of Gwendolyn MacEwen’s Dark Pines Under Water, hints at this questing, at this desire to expose, to tell, a long suppressed truth…

P.S. Two other poems from Migration can be read in last summer’s, water-themed issue of Broken City (along with a bunch of other great stuff).