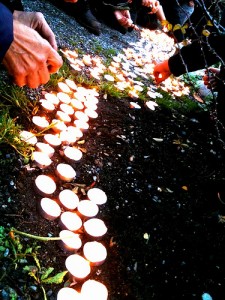 Made by multidisciplinary artist Jani Lauzon, the film follows the feet of a girl leaving her territory, going to residential school, spending time on urban streets and finally, returning home.

While the film has a happy ending, with feet fit once again into moccasins, the powerful six minutes still echoes with the difficulty of this stumbling journey and the tragedy of all those who don’t make it home.

For me, it brought to mind a conversation I had several years ago with Doris Lonethunder, for an article I was working on for Herizons Magazine.

I had to ask her about her daughter, Shirley, who went missing on Christmas Eve in 1991 and has never been found. Her voice shook and she dissolved into tears while we talked.

This is one of the hardest things for a journalist: to ask tough questions of people you know you’re going to hurt. I didn’t want to make Doris cry, but I did, because I felt strongly that our difficult conversation was for the greater good.

I needed a quote from someone directly affected by this terrifying reality and Doris gave me that, the emotional gut-punch that opened my piece about an issue that was just beginning to come into the mainstream.

Amnesty International had recently released their Stolen Sisters report, the horror of Robert Pickton was slowly emerging, and it seemed like another serial killer was on the loose in Edmonton, preying on aboriginal women.

In my research, the name Helen Betty Osborne came up a lot. Nearly a decade later I would find myself living in the town where her short life ended, subbing at the high-school she attended.

Out at Clearwater Lake, a memorial has been erected in the sight where she was slain. The simple wooden cross on a stone base is covered in items left by people paying their respects. Medicine bags, beading, small stuffed animals, a drum.

A young, bright woman, Helen Betty Osborne was brutally assaulted and murdered by four white men in that spot, north of The Pas, in the autumn of 1971.

The Stolen Sisters report explained that “a provincial inquiry [in 1991] subsequently concluded that Canadian authorities had failed Helen Betty Osborne. The inquiry criticized the sloppy and racially biased police investigation that took more than 15 years to bring one of the four men to justice.”

“Most disturbingly, the inquiry concluded that police had long been aware of white men sexually preying on Indigenous women and girls in The Pas but ‘did not feel that the practice necessitated any particular vigilance.'”

It’s been forty years since Helen was murdered and a decade since the Secret Sisters report came out. Some things have changed.

Alerts about missing native women now pop up on Facebook feeds and a new angle on violence against aboriginal women is emerging, in the form of news articles about the trafficking of young women from northern First Nations.

My article, published in 2005, reported on an estimate of 500 missing and murdered women, while a new database, created by federal civil servant Maryanne Pearce, puts the number at 824.

But despite the deepening severity of this issue, the Special Committee on Violence Against Indigenous Women DID NOT recommend a national inquiry in its report released earlier this month.

The Committee called their report Invisible Women: a fitting title for a study of the disappeared that doesn’t demand a full, national investigation into the details of their vanishing.

You know what Doris Lonethunder said to me?

“[The police] found nothing, no trace of her. They weren’t going to do anymore.”

Sadly, many families searching for their missing aunties, mothers, daughters, grandmothers, and wives must feel the exact same way about the federal government this month, as the Conservatives simply say no to fully and thoroughly addressing this issue’s scale and severity.