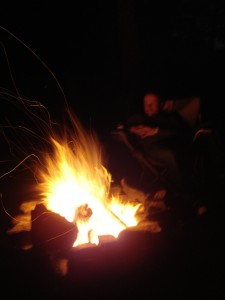 I miss fires. Not for heat: we’ve got one of those burning in our wood furnace right now. Rather the kind that you sit by, feet propped up on the rock ring, a bottle of beer in the camp-chair cup holder, while the flames reflect on the faces of your friends.

There’s spontaneous storytelling; laughter; analysis of questions that are hard to answer. The chance for ideas to bloom. (Just leave your Smartphones in your pocket, thank you very much…)

This is the inspiration for my new project, set to flare right here in January.

It’s a response to what you could call Internet fatigue.

You see, I’ve grown a bit tired of listening to myself, blogging about my own opinion, blasting tweets into the ether that are buried instantly in a heap of others (a couple days ago I wondered if the expression “fail again, fail better” would be so appreciated by so many artists if Samuel Beckett had simply tweeted it…)

I’ve seen a couple of writers give up the demands of social media recently – Sarah Selecky, who does so much to serve other writers, wrote this explanation of her decision to take a break after finding herself mediating a meditative moment through Instagram. Neil Gaiman, last July, announced that he’ll be taking a six-month social media sabbatical starting in January 2014.

For me, the answer is not to leave. In the past, I quit Facebook, and for a time, I loved it. More daydreaming, more space in my brain. But these days I realize that being a writer means keeping in touch with one’s readers. Plus, I live way the hell up here.

So, I’ve come up with a plan. It isn’t rocket science. It isn’t even a groundbreaking initiative. What it is can be summed up in seven simple words: Enough about me, let’s talk about you.

Starting on January 9th, I’ll be launching the Firelight Interview Series.  Once a month, I’ll be interviewing one of a diverse bunch of writers about the creative life for a post that will be up on the first Thursday.

The questions will come from me – things I’d like to know about them, their process, their work – and from them. Inspired by this article, I’ve asked them to also think up a few inquiries that they never get asked and that they’d like to answer.

I’m so excited about this project and the opportunity to engage with writers directly, in way I don’t get to often, in a back and forth that I hope will become creative and thought-provoking and alive, like a bright and wild fire.