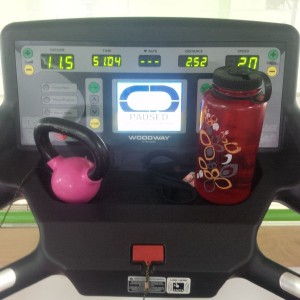 The view from my treadmill

I’ve never been a sporty girl.

In elementary school, I got out of gym for what seemed like months for reasons I no longer remember. There I’d be, sitting on the stage like a wuss, probably reading a book. I was the one who got picked last in team selection and usually managed an injury.

While downhill skiing, I broke my ankle (thus ending my fledgling figure skating career); while trying to play soccer in the school yard, I again sprained said ankle; while chasing a boy at Bible Camp, I broke my knee-cap (really).

Needless to say, there’s danger here. Since my job involves sitting for 87 hours a day, and staring out a window for the other 42, I could potentially be enormous. But, luckily, there’s travel, and that bug bit me early.

As a teenager, I had a routine of walking or biking the couple miles to the beach down the road from my house, staring out at Lake Huron and pretending it was the Mediterranean. My dream trip back then was Outer Mongolia, on camels, because I love the idea of far reaches, secret corners, or as close to them as I can get.

I’ve trekked into the Amazon basin in ankle high mud, hitch-hiked through Germany, Austria and Italy, backpacked from village to village in Hungary.

A few years ago, J. and I went to Newfoundland, without really training, and spent a week hiking the meandering, ocean-side trail south of St. John’s. It was hard. I remember a moment when I seriously thought – I can’t do this – but I was halfway up one of those mountain-sides they quaintly call hills so, you know, get a move on.

It’s all fine and good to do that. Shove my 20-something-year-old, social-smoking body up the side of an active volcano in Ecuador until I feel like I might have a heart attack but, you know: 40.

Last spring, when I learned to knit, I committed to knitting every day for the first few months so that my hands and arms would development that muscle memory. These days, I’m doing the same thing, but with walking. Of course, having a dog, my body already knows walking, but not so much with the hills.

Not that I avoid them. It’s just that there are no hills in The Pas.

So now I’m on the tread-mill every other day, gradually increasing elevation, enacting that hill-climbing/walking motion for nearly an hour each time (so far) in preparation for our hike through the heart of Scotland.

There are days, like yesterday, when I had too much to do and there wasn’t enough time and, meh, I didn’t want to go.

But I’ve learned a lot about that in the last couple years, about stick-to-itiveness and not giving so much credence to that voice in my head that says I don’t wanna, to that part of me that would rather opt out and sit on the stage.

Because you don’t get anywhere sitting on the stage.

There’s plenty of times when I have a chapter to rewrite, a hard scene to tackle that’s not making sense to me, and what I’ve learned is to sit down with it, to do it, to climb on the revolving belt of my brain, start moving, one step at a time, and it will carry me somewhere.

To some secret corner, to some far reach.