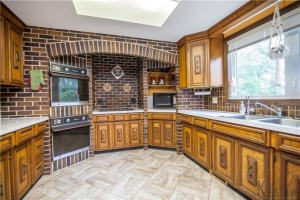 Can this kitchen be saved?

Last week, J. and I went south to shop for a new house.

After a long day of driving, we backed our tent trailer into what could have been the worst car camping site we’ve ever occupied: zero shade, edging the trail to the beach, and monitored by two bored children on bikes who alternated between staring at us and whining loudly.

J. got out the crank handle to raise the trailer, did a few turns, and T-O-I-N-G.

What was that? I asked.

One of the cables snapped, he said.

You know what those are: the things that make the ‘tent’ part of ‘tent trailer’ possible.

My industrious husband was all set to find a hardware store, buy something called a cable clamp and sacrifice himself to the descending hordes of mosquitos in an attempt to fix the thing.

But it was 5:47, on a Sunday, and it seemed that every store that might carry such a thing within a hundred mile radius was closed.

We got reimbursed for a week’s reservation, surfed around on Hotels.com, and soon found ourselves de-briefing in a hot tub at the nearest Canalta.

Lately, J. and I have been talking about ‘luck’ and ‘the universe.’

We aren’t new agers, but when we took the leap to put our house on the market three months ago to ‘eventually’ move south we had no idea that everything would happen so quickly.

In keeping with our rosy fate these days, the gods seemed to be smiling upon us yet again when that cable snapped.

We thought finding a house in three days would be easy – after all, we did it when we moved to The Pas – and therefore it didn’t seem like it’d be an issue that the campsite had no electricity and the only Wifi was in the washrooms.

As we sat on our comfortable beds, bellies full from breakfast, obsessively scrolling through Realtor.ca and shooting emails and texts to our dedicated, patient, hardworking realtor, we’d occasionally turn to one another and mutter: how were we planning to charge our devices?, and: Would we just have hung out in the washrooms surfing the net, calling MLS numbers through the walls?

Then, it started to rain.

By now we’d be divorced, J. said at some point, as we watched the torrential downpour through our hotel room window. We laughed tiny hysterical laughs, then muttered a few quiet prayers.

House after house looked great in the pictures but didn’t seem to have not been cleaned since photo day.

One was on a gorgeous riverside lot but was occupied, it seemed, by hoarders, with the only shower in a damp and grubby basement.

Another needed a demolition crew just to clear out the ambitious 1970s brickwork in the kitchen (complete with a cave for an enormous microwave), which is a bit too much of a renovation for me.

Still another was nice, if small, but the gardens were strangely overrun with water plants like horse tail and bullrushes.

Finally, on Wednesday morning, after seeing over a dozen places, we’d just about given up. We’d started considering other options (like renting, which would mean a third move likely within this year, and I know how middle class I sound…) when our realtor sent me a text.

He suggested we do a drive by of a house we’d seen online but had dismissed. In the pictures, it looked too small, the yard too bare of trees.

We got in our car to go find out.

Turns out, it’s the last property on a dead-end road, is situated on nearly 1.5 acres in lovely St. Andrews, and has plenty of trees.

There’s a large deck facing south-west and it’s a twenty minute commute from J.’s new job and a half hour drive into downtown Winnipeg.

Best of all: the owners obviously cared about the place. When we left, we did not feel the need for a hot shower.

We settled on a good price, the home inspection went off without a hitch, and yesterday we signed off on the conditions, so now, after a few hurdles and lots of luck, we’ve got ourselves a house (only our fourth, in the past thirteen years…)!

Closing day is on our fourteenth wedding anniversary so come sunset on August 23rd, you’ll find us on our new back deck, raising a toast to the next chapter and whatever fortuitous (and no doubt sometimes difficult) turns of fate the future has in store. 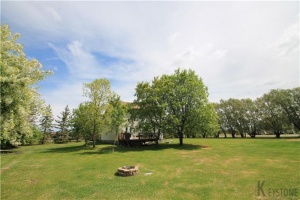 The back view of our new house.