I looked up the etymology of tenacity this morning, and discovered that it comes from the Latin tenax which means ‘holding fast’ (the original meaning of fast being ‘to hold firmly’).

I like this. I like the idea of holding one’s dreams and intentions and desires firmly in one’s heart. Because that’s what I’ve been doing, for a long time now, and today I want to write about how tenacity, doing what you do no matter how many times you’re told ‘no’, can eventually reap external success.

In my twenties, on a mission to try to get poems or stories published in most of the literary journals in Canada, I started submitting to The Fiddlehead, that grand dame of small magazines. Founded in 1945, The Fiddlehead has published a long list of celebrated writers, including Margaret Atwood and Michael Ondaatje before they were Margaret Atwood and Michael Ondaatje.

So I kept trying. Partly because it means a lot to appear in their pages, and partly because I loved their rejection letters. If you’re a writer in Canada, you likely know what I mean. Those tiny slips of paper with handwritten comments: this works, that doesn’t, try us again. I got a bit addicted to those; I have a stack, dating from 1997. 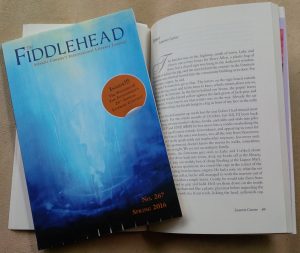 Getting into The Fiddlehead became a kind of mission for me, a little bit like the Canadian version of Sylvia Plath sending her poems over and over again to the New Yorker.

And now, nearly twenty years after I mailed them my first efforts and received a polite note from poet Julie Dennison saying my poems had made it to a second reading, but, you know, no thanks, I’m finally appearing in their pages.

My short story, Bones, is in the latest gorgeous issue, the Spring issue, appearing alongside the winners of their 25th literary competition and some other luscious work.

The butcher was on the highway, north of town. Luke and I drove out to buy bones for Barry Allen, a plastic bag of them, but a closed sign hung in the darkened window. He’s gone to deliver the pig, said the man behind the counter in the furniture liquidation store that had moved into the community building next door. For the Hawaiian supper, he said.

All week I’d wanted to go to that. The letters on the sign board outside the hotel dining room said ‘ho’olu komo la kaua’, which meant ‘please join us’ according to the Internet. In the forest behind our house, the poplar leaves and tamarack needles blazed yellow against the dark green of the Jack pine and black spruce. It was easy to see that winter was on the way. Already the car had to be warmed up; my breath hung in a fog in front of my face in the early morning.

Support me (please), support these small magazines that pay writers and that provide a venue for writing which might not otherwise make it out into the world. Subscribe or order this issue online, or head to your nearest bookseller to nab one.

In other news, I’m hard at work on a new, exciting, creative teaching project which I’ll launch in the fall. If you’re a writer (or you know one) who needs to reboot your practice or if you want to finally begin your story (and stay with it), this will help! Stay tuned for more details – and subscribe (top of the right sidebar) if you want to receive occasional news about special deals and discounts and the odd freebie (starting with a free writing lesson and a list of juicy prompts).