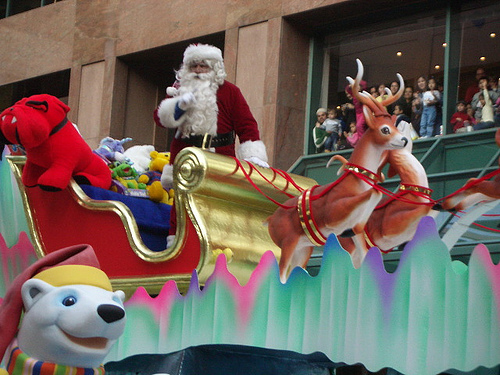 Imagine this: you’re standing in a train station, minding your own business, reading a magazine or staring at your fingernails, when all of a sudden the whole place begins to rumble with the arrival of a locomotive. A whistle blows. Steam billows into the air. Everyone watches as the behemoth pulls to a screaming stop, opens its doors and emits a rowdy, eager, excited crowd of bright-eyed revellers.

Ladies and Gentleman, it’s the Santa Claus Express. Buckle up, put away your reading material and get ready for the ride. From where I’m standing, it seems that this is the weekend the holiday madness celebrations officially start.

Here in Orillia, a candle lit procession along our historical main street will start at the Legion on Saturday evening at 6:00 pm. The town crier (yep, we still have one of those), minstrels and carolers will lead everyone to the Opera House, where Father Christmas, the Holly Queen and a bunch of official folk will ring an official start to the season (don’t forget to bring your donation of a non-perishable food item). The next afternoon, Santa is dropping in during the Santa Claus Parade to give a few ho-ho-hos before things really get hectic.

The guy has a busy schedule. At varying times on the same day, he’s also showing up in Oakville, Sudbury, Cambridge, Niagara Falls, Woodstock and Thunder Bay. In Ottawa, this Saturday’s Help Santa Toy Parade, organized by the Fire Fighters’ Association for nearly 40 years, is expected to fulfill its tradition of bringing out thousands who line the streets to give their donations of new toys or money to people collecting along the parade route.

But Santa’s starring appearance on Saturday will happen in the nation’s biggest city, during the world’s largest Christmas parade (warning: very creepy elf on this website).

Started in 1905 as a way to advertise the arrival of Santa at the Eaton’s department store, the Toronto Santa Claus Parade has persevered through two world wars and the end of Eaton’s sponsorship (1982: soon followed by the end of Eaton’s). Along the way, Santa’s been pulled by live reindeer shipped in from Labrador (1913) and brought in by aeroplane (1919). During World War 2, when supplies were scarce, costumes were made out of paper (1939). These days, about half a million people throng the streets to watch a multitude of marching bands and over 20 elaborate floats wind their way through the downtown streets.

Whatever you do this weekend and however you celebrate (or don’t) this time of the year, it’s pretty clear that from here on in, things are gonna get nuts.