Haunting and Haunted: Inside Dalnavert House 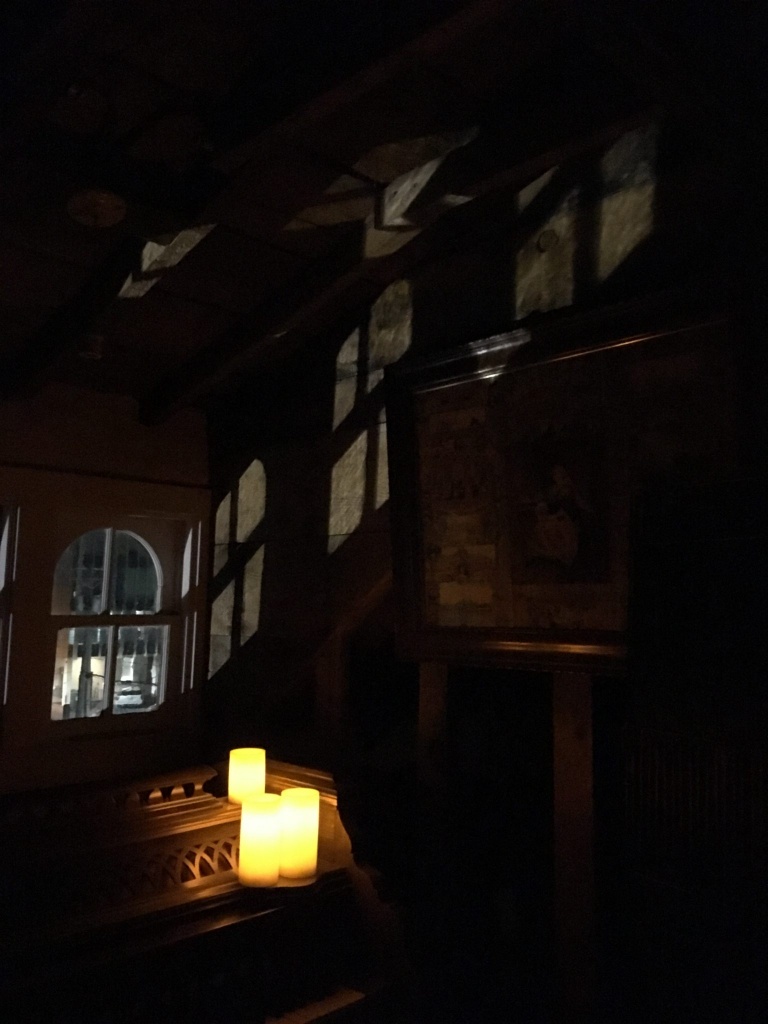 Last Friday night seems so long ago. Since then, I’ve been catching what I can of the events at our city’s extraordinary writers’ festival and also trying to negotiate the rising, rollicking tides of anger I feel at what’s happening in the U.S. (see my Twitter feed)… Looking back, last Friday seems like a respite, although it wasn’t without its hauntings….

Mostly, though, my night locked in the Dalnavert Museum was so enriching. Having a chance to write by candlelight in an attic with three others – Joanna Graham, Kevin Marc Fournier, and Jonathan Ball – and their furious pens was such a treat!

We had open access to drift through the house – the parlour, the wide front entrance, the kitchen and bathroom, the servant’s quarters, the bedrooms.

We could peek into the medicine cabinet and examine the books in the study.

Writing stations were set up – including one in the creepiest nursery I’ve ever stepped into (and promptly out of). 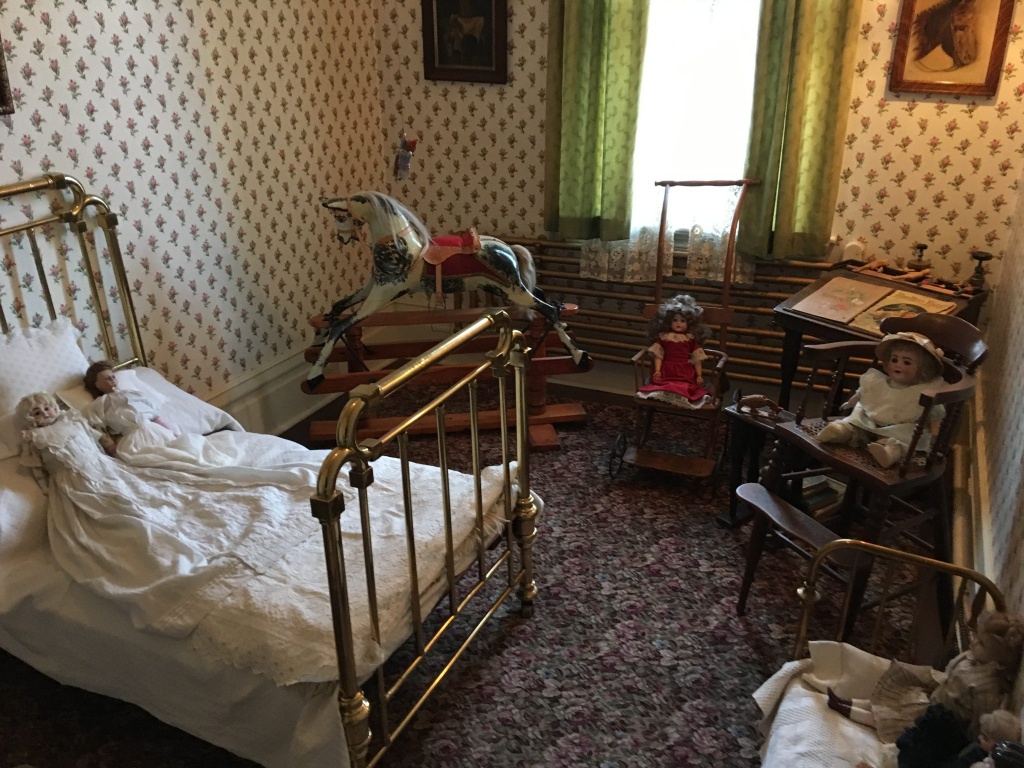 One brave writer spent a long time in the basement while I mostly stayed in the nook beside the gorgeous stained glass window overlooking Carlton Street and in the room of the son who died young where, I learned in the morning, the most “activity” has been observed. 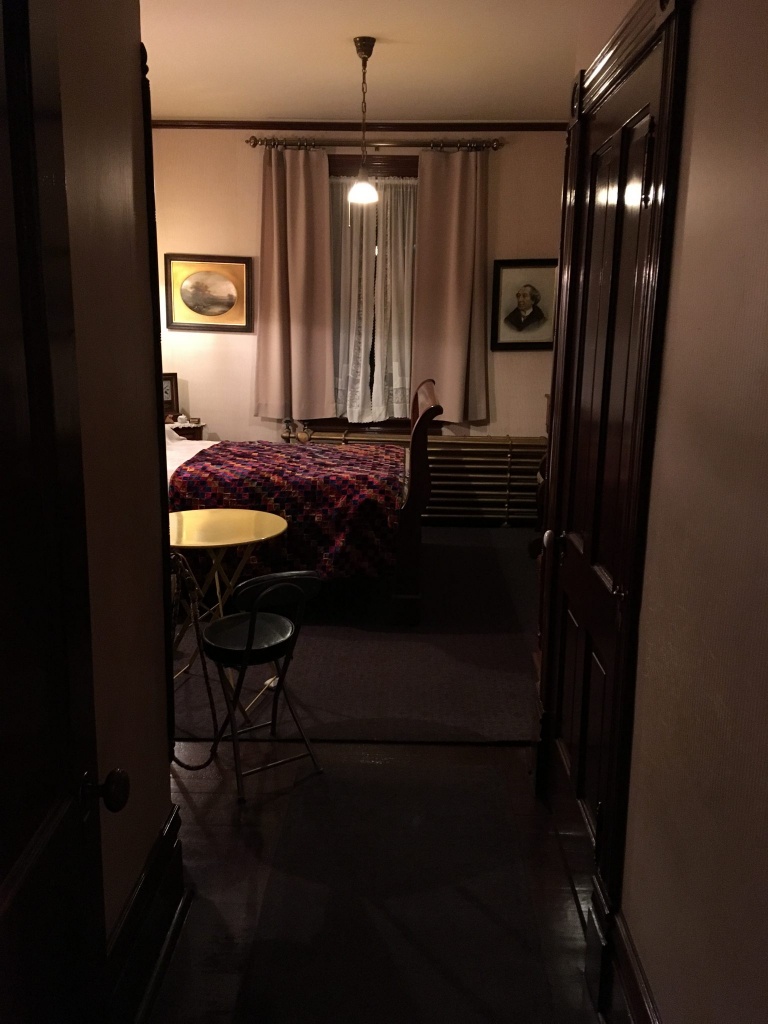 The only caveat: don’t touch the artifacts. Which meant we were sort of like ghosts ourselves, floating amongst the heavy Victorian furniture and wooden trim. 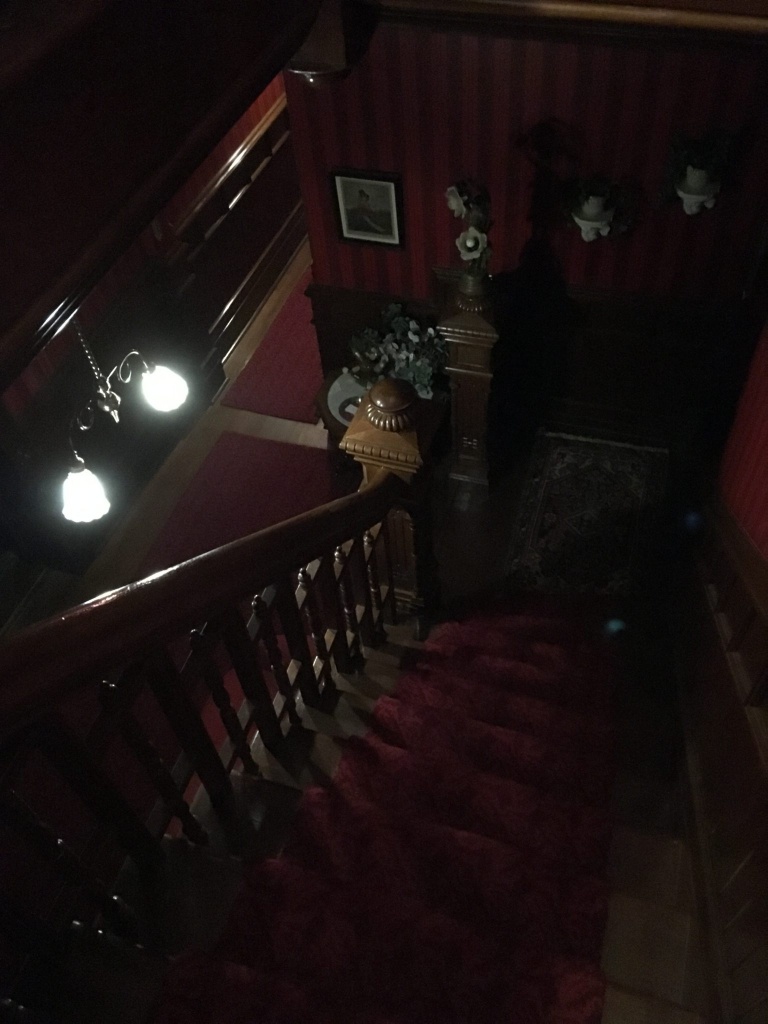 Which meant that in the morning I asked our guide (and sleepover buddy), Charlene, to show me the son’s stamp collection.

She slipped on her black archivists gloves to flip through the book and in the process of taking photographs, I accidentally caught a short video.

And the video is really, really weird, which I discovered hours later, showing my husband my pictures. See for yourself:

People have said, it’s just the lights – Edison bulbs, or whatever else Dalnavert uses to imitate gaslight – but I’ve taken some sample clips under the Edison bulbs in my own dining room chandelier and the glaring fluorescents at my office job and they’ve produced still, solid videos. No wacky, crazed shimmer of energy in those. No bizarre groan-breath (the radiators coming on, a car driving by? I really don’t know…).

I’m so curious, but actually it doesn’t really matter, does it?

As a writer, parallel dimensions are always present, ready to be drawn from (as we discussed in a podcast recorded that night, that Jonathan Ball will launch closer to Halloween), so I’m willing to believe that I might have recorded a slim sliver of another reality, hovering close to ours…

On Halloween night, we’ll be reconvening in Dalnavert’s parlour to read the stories that were inspired by our night in the house and, if you’re in the area, I hope to see you there!