I woke at four this morning, and with night around me, the dark, quiet fields outside, I wrote for a little while. A couple of poems came out: one about the sleek black kitten who lives in the house we’re house-sitting on a hobby farm in Alberta, another to my brother whose birthday is today.

Slowly, silence settled around me, but more than silence: a sense of peace. It was similar to the peace that occupied me on the night he died, when I woke near three a.m. and sat on the living room couch, staring into darkness, feeling like a great struggle had passed.

It had passed (although right then, I didn’t yet know it).

He was gone, and with him all that pain and fear. 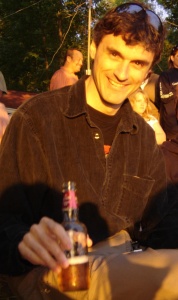 Through much of his half-century of life – and not just his awful final months and days (which I am working up to writing about, because his story is, in part, a truly horrifying example of how our medical system abysmally fails the mentally ill even when they ask for help) – my brother struggled.

But during nights like last night what I feel most profoundly, most blessedly, is how that struggle is over.

One of these days, I will turn from my brother’s illness and difficult circumstances and death to the things of his life – his writing, ideas, games he made (with no formal computer coding training), and more. After all, entrusting me, the last text he sent was the file address of his poetry and other writing on his computer.

But for right now, what I want to say is simply this: happy day of your birth, my brother.

Happy lifetime achievement award, happy you-walked-the-path-for-as-long-as-you-could. To you I raise a toast, your load lightened, gone off flying through the stars.