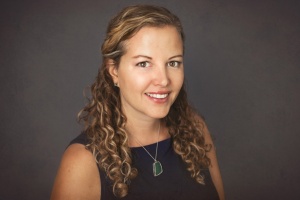 Mother to three kids, one of whom is a night-nursing toddler. Half-time elementary school teacher. Squeezing in work late at night until my eyes burn, because there’s no other time to do it.  Every single one of the readers here can match, if not trump, my busy-ness, am I right? And then the inevitable question: on top of all this, how do you possibly make time to write a novel?

My answer to this is quite straightforward, actually. Simply punch a few buttons on the ol’ time machine and bang out an extra three hours per each twenty-four. Easy peasy lemon squeezy. But for those of us who are quantum-physically challenged, I have some other straightforward tactics as well.

When I started writing my debut novel, Watermark, I wasn’t part of a writing community. I was a busy working mom who had decided that her 40th birthday present to herself would be the gift of a daily commitment to writing the novel I had always assumed I would write someday.

I had been procrastinating for years, and it was becoming clear that there might never be a time slot for serious writing in my life unless I proactively created it. I didn’t want to spend more time or money on pursuing any more formal education, so along with my daily writing commitment, I tailored a writer’s craft syllabus for myself. I ordered a stack of well-reviewed books about plot, structure, how not to write a novel, etc—my personalized Master’s writer’s craft intensive all shipped directly from Indigo in one tidy order.

One of the twenty-some books I read strongly resonated with me: Stephen King’s On Writing: A Memoir of the Craft.

In it, King outlines his own approach to daily writing quotas and getting that first draft of a novel written.  He holds himself to a strict quota of 2000 words per day—on birthdays, Christmas, you name it. And he feels that three months is the maximum amount of time it should take to write the first draft of a novel.  Any longer, he explains, and the plot starts to go a little flaky around the edges.

As a first time novelist looking for a guiding principle, and with no other writer friends with whom to compare notes, that number—three months—got imprinted on my brain. Were I part of a circle of busy mom writers my age, juggling the demands of work and mothering young families, the rough draft template imprinted on my neocortex would have undoubtedly been unrecognizable to Stephen King. But I didn’t know any other writers, and so King’s recommended work quota became my default setting.

And with the near magic that is actually fierce intentional goal setting, I learned to adapt my situation to produce the necessary results. Seeing as I am not Stephen King (this I recognized), I lowered my quota a titch, down to 1000 words (King himself concedes that the rest of us mere mortals can be satisfied with 1000), and that done, I committed to it.

But how? What’s the trick? The trick is that you make the promise to yourself to actually do it.  And astonishingly, for me, once that promise was made, I was able to find pockets of time which, when smooshed together, somehow almost always added up to the writing time necessary to get my quota in. How much time does the average adult spend on unnecessary screen time? Cutting out most of that, alone, created a decent chunk of time for my writing. 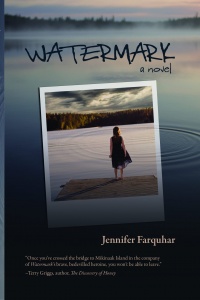 I was fortunate to be teaching only half-days while I was writing Watermark, so until baby #3 came along, I was able to carve out writing time in the mornings (now that I’m home with a 13-month old, that writing time has been reassigned to two separate daytime napping slots.)

I’ve learned to become very efficient with a two-hour time slot.  I create my writerly version of a visual and audio deprivation tank to quickly remove myself from the world around me, and delve into that deep creative place that is necessary for creative writing. For me, this consists of being in a room with a closed door (just about any room will do—I wrote most of novel #3 sitting on a bed with a notebook in my lap because the house we were living in didn’t have an office), inserting earplugs, then industrial earmuffs, then a hood or scarf on top of it all.  Once I have blocked out the external world in this way, I then add in a well-chosen layer of sound: for me, it’s often Glen Gould’s Goldberg Variations.

I’ve also re-examined my belief that I only have the creative capacity to write during the mornings. I discovered during my first round of revisions with my debut novel that, once the kiddos are tucked in, tomorrow’s school lunches are made, and the last of the dirty dishes have been washed, as long as I have a pot of weak tea at hand for comfort and fortification, I can usually open my manuscript and get more writing done. The night writing sessions don’t come as easily as the morning sessions, but beggars can’t be choosers.  And I find that for the revision stages of my writing work, which don’t require that same deep, immersive creativity that the blind journey of a rough draft demands, night writing has been a helpful answer to the HOW?

But, the mechanics of the how is the easy question, isn’t it?

The tougher question I continue to battle, as the kids clamour for my attention, and my husband slogs away at work that actually brings in a decent income, is: WHY? Or, put a different way: How do I justify spending so much of my precious time, in these treasured early years of my children’s lives, on a pursuit that is statistically unlikely to bring in reasonable financial rewards, and often causes much stress and anxiety?

It’s not an easy question to answer.  I’ll put this one to my readers. How do you justify it?

Originally from Manitoulin Island, Jennifer Farquhar lives in Kitchener, Ontario where she is an elementary school teacher and mother of three young children. Her short stories have won awards in the Manitoulin Expositor and the Toronto Star. Her debut novel, Watermark, was released last week.

Lauren here: If you’d like to put your name in the draw to win a copy of Watermark, jot a comment about the strategies you’ve used (or would like to) to forge a path back to your own writing and why this is important or simply what resonates with you about the post. I’ll be collecting the names next week and doing a random draw.