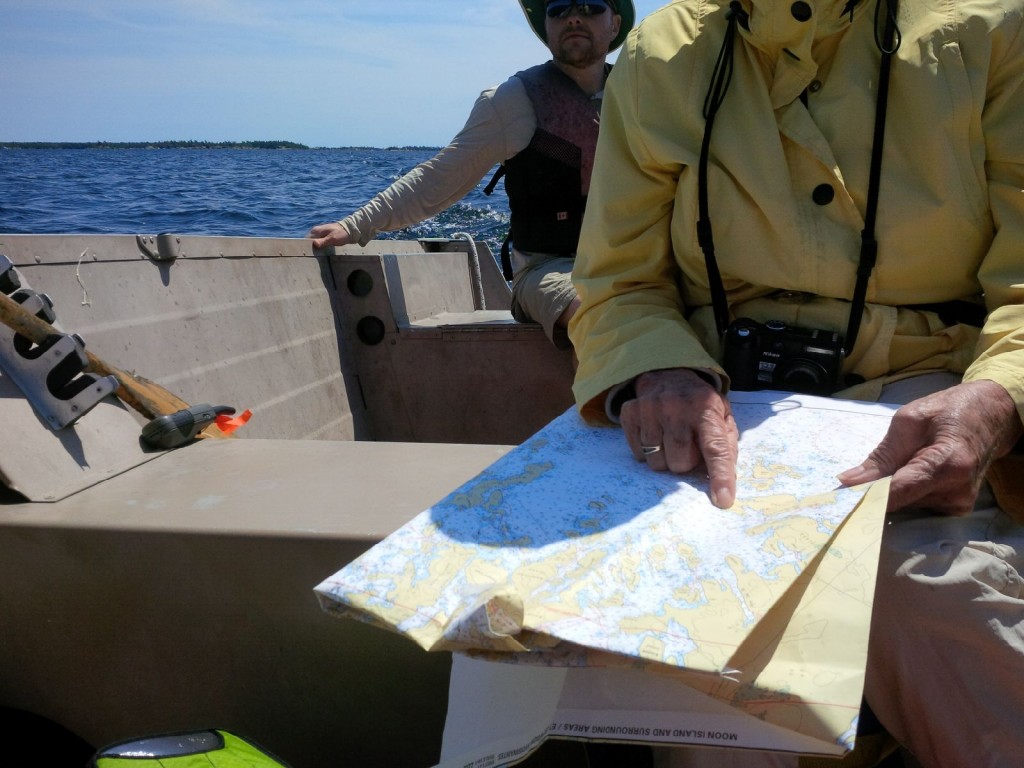 Just over a week ago, I had one of those mysterious, meaningful moments that seem hard to explain. It happened back home, in Ontario, the place my husband J. and I returned from on Tuesday after a fulfilling yet intense time away.

We ranged far: from the Muskokas to an island out in Georgian Bay to a day-trip with J.’s family to a distillery and wineries in and around Niagara-on-the-Lake. There are many stories to tell, of course, but some stand out more than others. One, in particular.

The day before we left my mom’s place, J., my mom and I rented a boat to motor through the labyrinthine maze of islands and water to get from the Moon River into the large water of Georgian Bay.

I have a pretty good idea what you’re doing, said the marina owner, before he grabbed us a just-in-case second can of gas. He gestured towards the big water, south of where we stood on his dock. My mom and dad are both out there, he said, and I felt a lump form in my throat.

Ulrich had a love, nearly an obsession, with one island in particular. He also had a thing about not giving out its name, so it will remain nameless here as well, but I will tell you that it’s located near Frying Pan Island, where float planes land and boaters pull off the main channel for a feed of fish-and-chips at Henry’s.

It took us two hours, but we got there.

J. anchored us on the rock and we climbed out of the boat to wander the strange flowing rock formations. Ulrich always said that these twisting shape were the roots of the ancient towering mountains, gradually worn down by geological time and ice ages.

He understood the geology of the place, but he also saw its beauty. In his words, from a book proposal he put together: “The island is composed of an assembly of complex forms, shapes and colours. They grade into each other in intricate patterns that resemble the skeleton of a beached whale, exposed deep roots of a giant tree, a woven skein of snakes or bones. The rock has been sanded by ice, worn by water and incised by erosion. It is intriguing at every scale of observation. Sclerotic veins disappearing into unfathomable depths, hint at further secrets…” 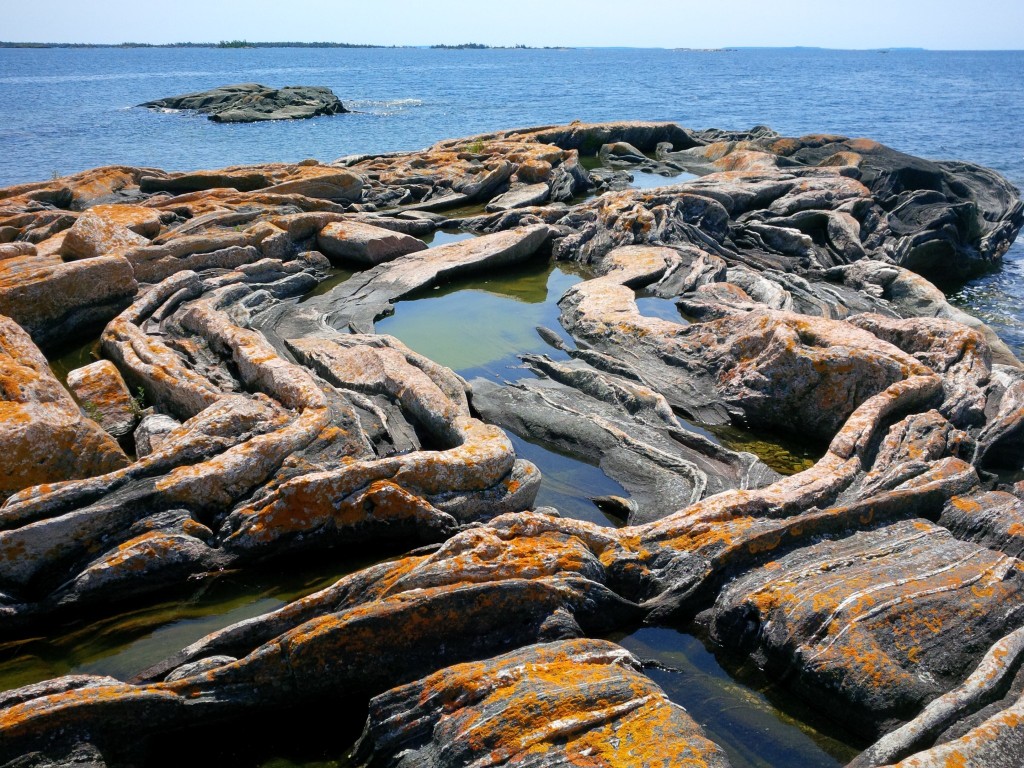 The bones of the earth…in Georgian Bay

My mother recounted memories. The helicopter pilot who first showed them the place while Ulrich was on a surveying job for the provincial government, and the times they returned, most recently in their sailboat, to anchor off shore. Ulrich swimming underwater, taking photographs while the dingy drifted away, so my mother had to bang two pots together to get his attention.

The perfect place to scatter some of his ashes.

When we were ready, I read a poem by Pablo Neruda, a writer Ulrich loved. We toasted with good scotch. The surf pounded up on a rock ledge and drenched me as I took a turn and when I backed away, J. said, There’s a snake.

When I looked, there it was: huge, nearly four feet long, I’d say, rising straight up out of the rough water which had turned milky white from Ulrich’s ashes.

We watched, waiting to see if there was a rattle on the end of the creature’s tail.

I remember the silence, the wind, the large lake.

A big silence, holding us there in that moment. 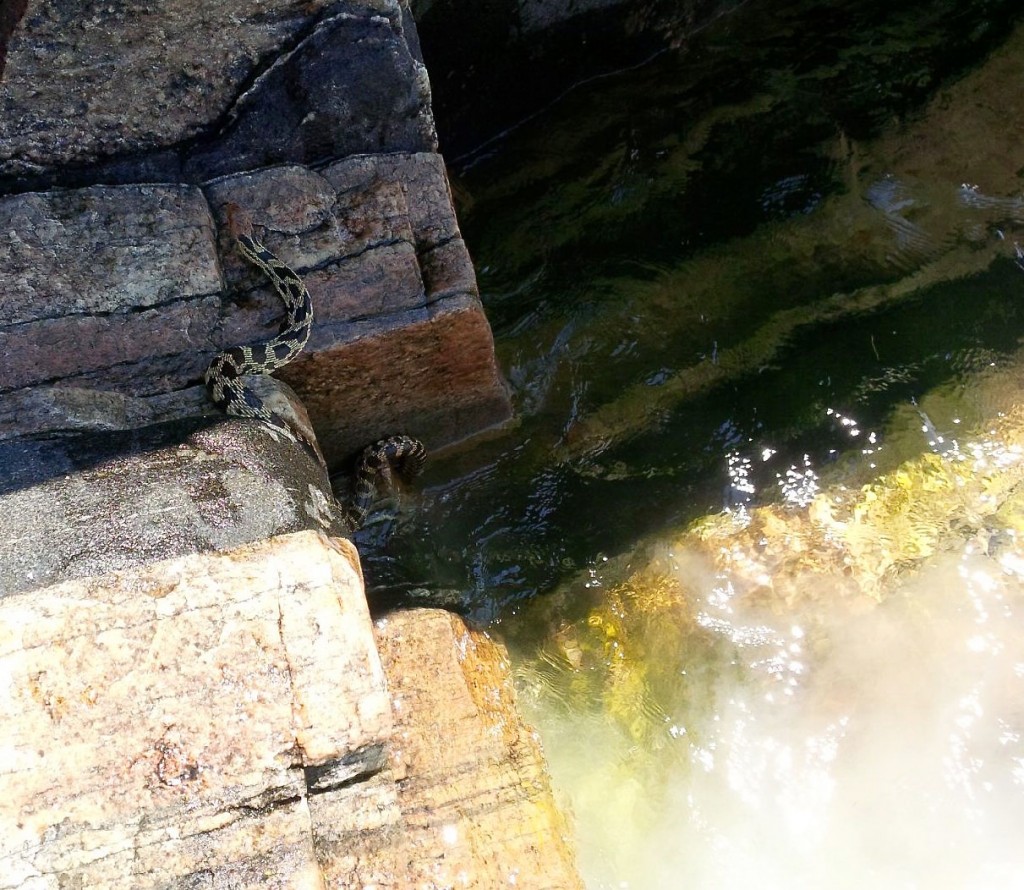 The snake was an eastern fox snake, spotted with large dark brown blotches. They are usually terrestrial, I’ve read, but it had pushed up out of the relatively deep blue-green depths. We watched as it swam through a puddle on the ledge which had turned opaque from where my mother had first scattered Ulrich’s remains, and where we’d poured his small cup of scotch.

It found a patch of green on the edge of that water and curled up, hidden and relaxed, at home in its world.

The next morning, I woke up happier. Something had eased in me that’s felt sticky and difficult throughout this year’s long winter. We left my mother’s house to drive south and at my in-law’s in Scarborough, unable to sleep one night, I began writing a poem about a snake. I couldn’t get up without waking people, so I let it drift through my mind. It’s forgotten now, but perhaps it will return and even if it doesn’t, it has been written. It has been written in the wind.